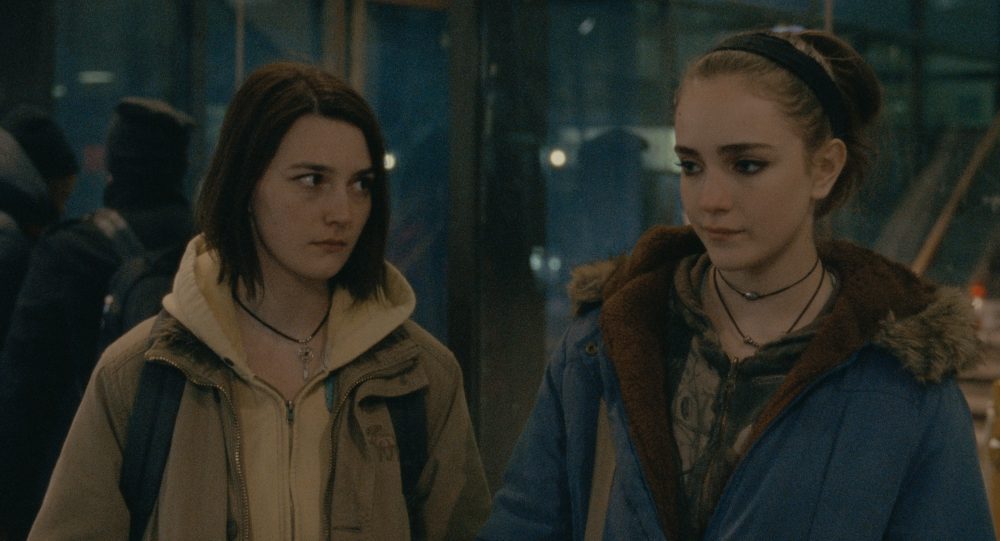 It’s almost impossible to watch Never Rarely Sometimes Always without being immediately reminded of Cristian Mungiu’s 2007 masterpiece 4 Months, 3 Weeks, 2 Days. One the one hand, it’s nothing short of an ultimate compliment to put any film in the same stratosphere as Mungiu’s. On the other hand, depression can’t help but set in by seeing how eerily similar the premises are and how little truly separates 1987 Communist Romania and the rural and sweeping areas of 21st century America that are infested with Red-State christofascism.

That backward, toxic worldview is represented by small-town, rural Pennsylvania where Autumn is a high school student. She’s introduced performing in a talent show, where rumors of her “promiscuity” are bandied about by the men in the crowd. Autumn finds out she is pregnant when she misses her period and goes to what she thinks is a women’s clinic to find out for sure, and her mind is always set on terminating the pregnancy. Realizing that Pennsylvania’s restrictive laws on abortions for minors will cause her immense problems with her parents, she and her cousin Skylar decide to pocket money from their grocery store jobs and travel to New York where they can have the procedure done without the conservative barriers. While Autumn isn’t pushed to the limit of going to an illegal doctor in order to pursue and abortion as Găbița is in 4 Months, the hoops she has to jump through — from the “pregnancy center” run by non-medical professionals that serves merely as a mouthpiece for evangelical propaganda to the numerous legal and medical hurdles and complications of having the procedure done in New York — are nearly as disturbing to witness.

Writer/Director Eliza Hittman doesn’t just focus Never Rarely Sometimes Always on the political realities of abortion in the United States, however. Her film is a deep, wide sweeping examination of women’s constant interior fear of men — every single man in the film is either abusive, creepy, an/or deeply vile — and how vast a gulf has grown between the urban parts of our country and the rural, small towns that have been left to their own devices. The stark contrast between Autumn and Skylar’s Pennsylvania hometown and New York City is embedded into small moments in the film’s second and third acts, as we see all of these things through the eyes of Autumn’s inexperience. Her hometown was a handful of buildings and everyone knew everyone else and then, in the midst of the most traumatic experiences of her life, she’s thrown into the deep end of New York City with only her cousin on her side. She’s practically alone, and the change of scenery is an additional culture shock that makes her feel even more vulnerable and powerless.

Sidney Flanigan is a revelation as Autumn, giving a performance that is understated and constantly heartbreaking. Autumn’s internal turmoil is never in question, and Hittman allows her to silently express so much and trusts Flanigan’s performance to convey so much of the film’s emotion. Hittman leans into Flanigan’s subtly expressive face and, on multiple occasions, just lets her frame linger on her visage for extended periods of time. These unbroken shots are a thing to behold, with a scene about halfway through the film in one of the clinics where Autumn breaks down while being questioned by a therapist as one of the best scenes I’ve seen in years.

This year’s theatrical release calendar has been drastically cut short by COVID-19, but I wouldn’t have been shocked had Never Rarely Sometimes Always would have been my film of the year even in the best of cases. Hittman’s film is a legitimate American instant classic, telling a harrowing story that never pulls a punch in its societal commentary without ever forgetting that the character’s journey is the most important part. It is not an easy watch, nor will it uplift you, but regardless of how the rest of the year pans out cinematically, we at least got one essential film that belongs in the pantheon of recent masterpieces.

J. Horton On: How Much Money Can Filmmakers Make on Amazon... Previous
Recommendation: Welcome To The Basement Next