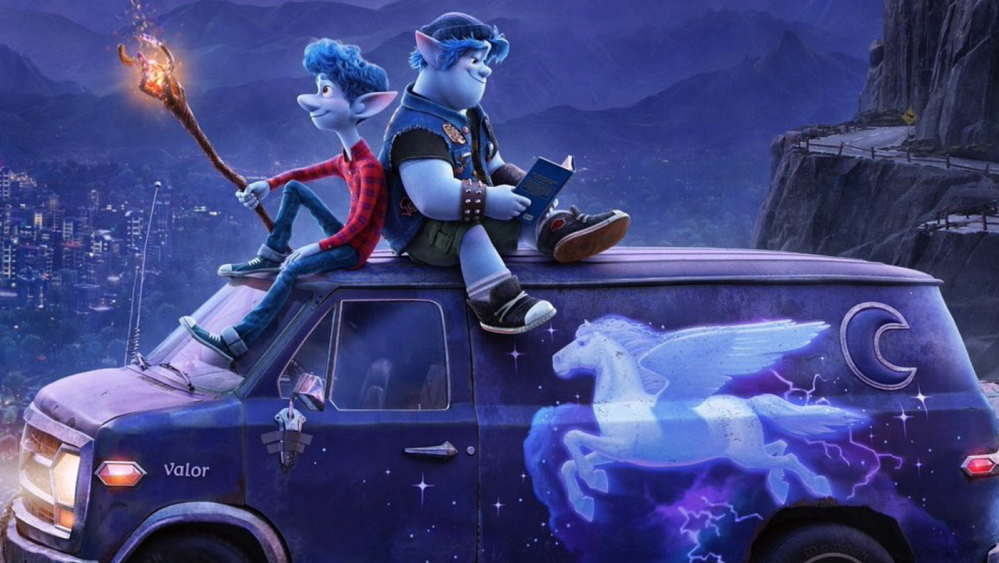 Pixar’s latest movie Onward has one of the studio’s more fun high concept pitches. A fantasy world, full of magical creatures and magic users, discovers that inventing the light bulb might be preferable to having to cast a dangerous fire spell every time you want some light in your house. Not long after that, centaurs discover they might prefer driving in a car to running on all fours. By the time the film starts, its world is basically that of our own, but with elves, centaurs, orcs, trolls, unicorns, dragons and what have you in place of humans. Which sounds like an ideal setting for Pixar to work their magic in, but unfortunately, the result is diminished returns.

In this world, we follow elf brothers Ian and Barley Lightfoot, voiced by Tom Holland and Chris Pratt, respectively. Their father died when Barley was very young and before Ian was even born, but on the latter’s sixteenth birthday, they discover that dad left behind a resurrection spell that allows his sons to spend one last day with him. Ian, who feels his dad’s absence the most out of the two, jumps at the chance, but during the preparation of the spell something goes wrong and only dad’s bottom half appears in his bedroom. The brothers have to set aside their differences and find a magical stone they need to cast the spell again before time runs out, with their half-a-dad shuffling around behind them.

It’s a premise that, on paper, lends itself well to the kind of comedic, slapstick anarchy that made Emperor’s New Groove one of the best Disney movies and injected Toy Story 4 with a much-needed spark of life,1 but director Dan Scanlon and his co-screenwriters Jason Headley and Keith Bunin take a different path. While there are a few decent laughs along the way, Onward is mostly Daddy Issues: The Movie. Any comedic potential of a pair of legs just shambling about is largely relegated to the sidelines, while Scanlon, Headley and Bunin zero in hard on Ian’s unresolved father-induced anxiety.

So hard, in fact, that they seem to have forgotten that a protagonist whose only defining trait is that he really, really would like to meet his dad isn’t particularly engaging or likeable. It doesn’t help that Holland and Pratt appear to be cast more because they’re already in the Disney stable than because of what they bring to the role. Neither manages to ever elevate their characters above, respectively “Peter Parker, but more of a dweeb” and “Star-Lord, but more Jack Black”, making the duo at the center of the film hard to ever truly love.

Though it also doesn’t help that they look pretty rough. This is easily the Pixar film with the least appealing character designs since The Good Dinosaur’s weird texture-less cartoon dino’s, with nearly all of the characters looking vaguely off-putting, though the Lightfoot brothers aren’t even the worst offenders in that regard. Those honors would go to their mom’s weirdly hunky centaur cop boyfriend, a cyclops cop who provides the movie with the obligatory LGBT-representation in the form of a single line of dialogue where she mentions having a girlfriend that could easily be cut out of foreign releases, and a gang of chipmunk-voiced, somewhat offensively queer-coded biker pixies.

With none of the characters being particularly memorable, it’s up to the world-building to pick up most of their slack. Scanlon et al. fill their fanciful-turned-mundane world with some cute touches like the movie’s equivalent of Dungeons & Dragons being an accurate historical text, or a fearsome manticore that sent adventurers on treacherous quests now running a family restaurant that leaves her way too busy (and viable to financial troubles) to send anyone on a dangerous quest. But for most of the adventure, this fantasy world feels pretty boring.

What adds to that is that the glimpses we do get of the world prior to its sense of adventure slipping out is also a bit po-faced, so the shift from “magic” to “mundane” is never felt as deeply as the movie clearly wants it to be. The screenplay feels like it was written by that one D&D DM who takes the world they’ve built way too seriously and requires their players to follow all the rules to the hilt. Which, in the movie’s case, leads to an embarrassed sounding Tom Holland constantly having to yell things like “Boombastia!” or “Aloft elevar!” every time his character does a spell.

Luckily, Onward does eventually stick the landing. The climactic action scene is quite fun and the hard to talk about without spoilers. The threat the brothers have to face is the film’s only fun and inventive character design. Most importantly, the film finally clicks emotionally, with the final scenes being both expectedly cathartic and unexpectedly un-indulgent — not everybody gets what they want in this movie. Still, there’s something vaguely cynical about the whole affair; a hard to shake sense that everybody involved knew the first two thirds weren’t working, but didn’t really care to fix it because they knew they nailed the landing. And while that isn’t untrue, it’s a recurring gambit by the studio that is close to reaching its expiration date.

Off the Beaten Path: DEATH TO SMOOCHY Previous
LEGENDS OF TOMORROW and SUPERNATURAL are Crossing Over.... Next