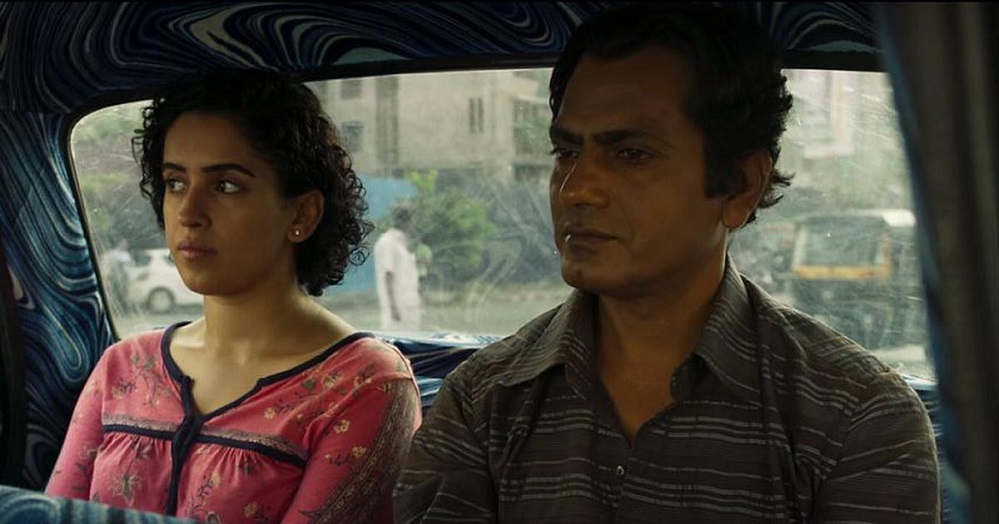 Grand gestures and big moments have always and likely will always be the focus of cinematic romance. Think John Cusack standing outside a window with a boombox or the passionate embraces of Leo and Kate in Titanic. Big moments pop and give audiences the warm and fuzzies, even if they’re rarely the basis for strong, healthy, and lasting relationships in the real world. Even the most realistic, complex depictions of courtship often feature one or two scenes of sweeping emotion, letting the audience cling to some fleeting sense of escapism. Photograph eschews this completely, instead cleverly opting to be withholding and as unassuming as possible, creating its own stamp on the genre.

The film takes place in mumbai where a man, Rafi (Nawazuddin Siddiqui), falls in love with a woman, Miloni (Sanya Malhotra). It’s a typical mismatch setup, with Miloni the upper class accounting student and Rafi the street photographer, neither content with their lot in life. Their meet-cute is merely a brief encounter that neither gives much credence to, but winds up tying their fates together for the near future. Miloni is shy, and her life is entirely ruled by her overbearing parents who see her as nothing more than an intelligent woman who will marry and move overseas to America. Rafi works tirelessly to bring his family out of poverty, living in a small ramshackle, crude apartment with four other roommates. Rafi’s picture he takes of Miloni during their first encounter is the only photograph she has of herself, and Rafi’s grandmother who raised him begs him to find a woman and settle down, so he lies and poses Miloni’s photo as his made-up girlfriend. When Miloni’s photograph is confiscated in class and Rafi’s grandmother comes to the city to meet his new “girlfriend,” the two make a deal that blossoms into something much more.

That blossoming happens at a slow, deliberate pace that frankly feels honest to the characters. Ritesh Batra’s film doesn’t cheat the film’s characters or their journeys, never falling prey to shortcuts that often ruins other films in the genre. There’s no magic moment where Miloni overcomes her shyness to become an outgoing extrovert. The couple’s relationship doesn’t follow a traditional arc that one would expect from a relationship drama, instead allowing the two characters to grow at a more natural pace.

Photograph shows immense restraint at all times. There’s almost no obvious, forthright catharsis to be found in the film; No kiss accompanied by a swelling score, no Love, Actually homemade signs at a front door, and no flurries of lust or passion. Even Rafi’s attempt at a grand romantic gesture — finding the one small factory still producing a cola that Miloni used to drink as a child — is all about the journey. Batra gives us the pieces of the story that matter: Rafi going out of his way out of pure love to do the impossible is what matters to the characters. The decision not to depict that culmination of these events is Batra showing his hand, hammering home the fact that big moments of enchantment might be enjoyable to witness but the immense challenges of getting to those moments is where love truly is found.

This is an absolutely gorgeous film to watch. After dabbling briefly in english-language films with Our Souls at Night and The Sense of an Ending, Batra’s return to Hindi film is simply stunning. When western (see: white) filmmakers tend to shoot India, they relish and fetishize the perceived poverty of the cities. Batra shoots and depicts the city as vibrant, yet unexaggerated — there’s no cultural tourism on display, rather the city serves as a mere setting and the story and characters are rooted in it.

Everything about Photograph is understated, possibly to a fault. Most filmmakers could take this story in a myriad of directions, focusing on the caste differences of Rafi and Miloni, the effect their differing skin colors and racism has on their relationship, the major cultural differences between Indian and European/American worlds, or even depicting all the “important” touchstones of love the couple share along the way. There’s a version of this film that ends with a kiss or a declaration of affection or even love. Those imaginary versions might be better or might be worse than Batra’s actual vision, but none of them are nearly as interesting as what Photograph actually is.

Welcome to FLEET WEEK! Previous
BARRY Season 2, Episode 4: What?! Next