Review: PIRATES OF THE CARIBBEAN: DEAD MEN TELL NO TALES

An echo of its former glories, the franchise continues to flounder 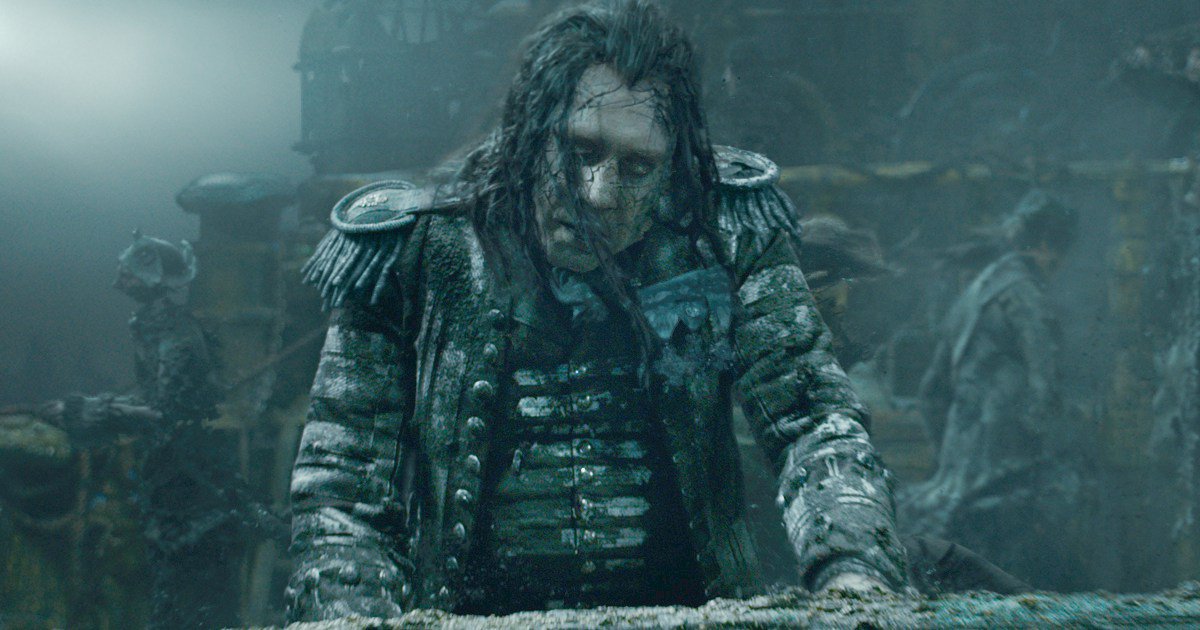 Pirates of the Caribbean: Dead Men Tell No Tales begins promisingly enough — The first scene establishes the basic plot, a son trying to find a way to break his father’s curse, and the second shows that this movie doesn’t mind showing off the kind of maritime mayhem, supernatural wickedness, and violence that helped to make the early Pirates films so titillating.

From there, we’re off. A young Henry Turner (Brenton Thwaites, whom you might remember fulfilling a similarly Basic Young White Man role in last year’s very special Gods of Egypt) is on a quest to find Poseidon’s Trident, a magical artifact which can give one control over the sea itself. With the trident, he plans to free his father, Will Turner, from the curse that keeps him aboard the Flying Dutchman and carrying out his duties to ferry the dead. All of that, of course, will be familiar to fans of Pirates of the Caribbean: Dead Man’s Chest and At World’s End.

In the same way that the plot relies heavily on the intricacies of what came before, Dead Men Tell No Tales relies on the feelings and energy of the previous Pirates films. This is it’s greatest stumbling block. The movie does its best to lean on the beats and balance of the first and best of the franchise, Curse of the Black Pearl, going so far as to set up a trio akin to Will-Elizabeth-Jack with Henry-Carina-Jack (in truth it reminds me most of another recent attempt to recapture the magic of the past to diminished returns). But unlike Pearl, a bravura action film and still one of the best blockbusters of the 21st century, Tales feels only like a pale imitation of what came before.

Without the assured, ambitious direction and visual panache of Gore Verbinski, it’s almost inevitable that the film will feel lackluster in comparison. Directors Joachim Rønning and Espen Sandberg supply a handful of images that might qualify as approaching the dark majesty of some of the frames Verbinski built in the original trilogy, like a skeletal boat rearing up out of the water, an amorphous orange ghost energy boiling out of the water as a ship and her men explode, or a battalion of screaming ghost men running atop the ocean. But the film never feels cohesive in the way that Pearl does, or even as over-the-top ambitious as the latter two Verbinski era films.

The characters, as well, are imitations of their original counterparts. Thwaites is able-bodied as Henry Turner, but while he has the earnestness that Orlando Bloom brought so well to Will Turner, he does not have the same edge and convincing strength that made Bloom the beating heart of the original trilogy. Many beats of this film are throw-backs to moments from the original, like when Henry puts a sword to Jack’s chest and demands his assistance, similar to what his father did in Pearl. Like Will, Jack handily puts one over on the young Turner, though instead of knocking him over with a yardarm, this time he just lazily points a gun at him.

Kaya Scodelario fulfills Keira Knightley’s Elizabeth Swann role, as an intelligent young woman chafing against the constrictions of the time period on her gender. Scodelario does her best with the material she’s given, I’ll say, though similar to Thwaites, she lacks the particular finesse and depth that Knightley brought to her own role back in 2003. It’s an almost amorphous factor that separates particular actors when they are given this kind of material and direction. Finding leading men and women who can sell the ingenue parts provided here to the two young actors is a taller order than people might realize, easily identifiable when you juxtapose the performances here with their counterparts in Pearl.

This brings us to Jack Sparrow, once again sloppily and slovenly portrayed by Johnny Depp. Jack has overstayed his welcome as a character who needs revisiting in our cultural lexicon. The producers can be complimented for realizing that making Jack the main focus was a creative mistake (On Stranger Tides) but Jack’s antics, as they have since Dead Man’s Chest, really, fall flat more often than not. The bizarre alchemy from Curse of the Black Pearl that made Jack Sparrow work (and earned Depp an academy award nomination for the role!), from Depp’s genuinely weird performance to Verbinski’s tight direction and pacing, are gone here. Depp’s lack of energy in the role almost seems to reflect my lack of enthusiasm for seeing him run around drinking and slurring his words.

As I mentioned previously, most of the film centers around disparate parties searching for Poseidon’s trident. Including, eventually, Hector Barbossa (an always welcome Geoffrey Rush, usually the best part of these things), and the nefarious Ghost Captain Salazar (Javier Bardem), who of course wants revenge on Jack Sparrow for condemning him to an eternity of being a really angry ghost. Something I genuinely find hilarious about these movies is the sheer number of people that Jack has caused to be cursed as supernatural creatures. Thanks to either his meddling, his scheming, or his ineptness, Jack has single-handedly caused hundreds of people to become zombies, fish-people, or ghosts over the years.

Javier Bardem’s mumbling Captain Salazar is a former Pirate Hunter who gets a fantastic introduction and then isn’t given the means of achieving the same kind of immortality that Geoffrey Rush found in Captain Barbossa. Salazar is a cruel ghost, now no longer killing just pirates, but wantonly murdering any and all who cross his path. There is the hint of an arc about his relationship to honor and what it means to him, but it’s never brought out in any real way other than that he no longer seems to care who he kills as long as he gets his revenge. Barbossa, meanwhile, is sadly not given as much scenery chewing as Rush deserves this time around. His only beats of note emerge later in the film, though I’ll just say that Guardians of the Galaxy Vol. 2 handles similar beats that are constructed for Barbossa much better than Tales even tries to.

Above all, the movie feels cut to the bone. An early set piece featuring a bank heist (seriously) has Jack, between shots, being dragged on the ground, to riding on a piece of wood, to suddenly climbing on top of the structure that his crew has managed to drag with them during their getaway. Later, in that scene mentioned above, when Henry accosts Jack, the movie stumbles awkwardly into a scene of flirtation with Carina. It feels like moments of connection were cut in the script or in actual footage more often than not. It’s not enough to be discernible in a largely structural way, since the film by-and-large works, but it is enough to rob much of the proceedings of effect and pacing.

Dead Men Tell No Tales is the unfortunate kind of retread which isn’t just unoriginal; it is actively less interesting than the predecessors it is emulating. Don’t look for fantastic, tightly choreographed sword fights or breath-taking set pieces here. And while anyone is going to have a hard time living up to the sort of finales that Gore Verbinski cooks up, having four people wrestle over a trident and then climb an anchor is an almost shocking drop in scale for the series, even if one of those people is a ghost.

Review: BAYWATCH Previous
The Last Pirate Movies Ever Made: Revisiting PIRATES... Next

"In a world without gold, we might have been heroes!"