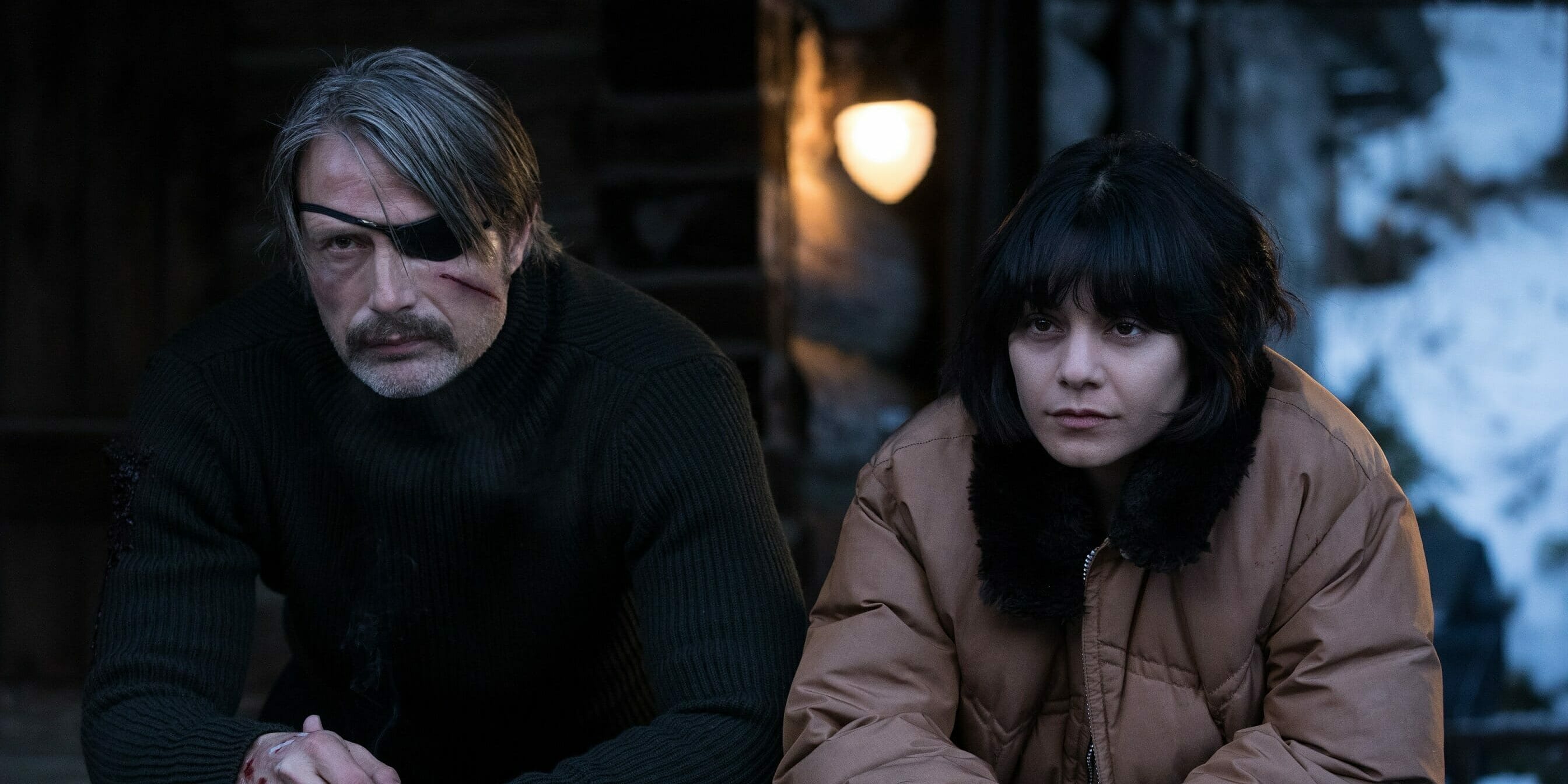 Ever since noted film scholar and man-about-town Tanner Volz introduced me to Nicolas Winding Refn’s trippy and beautiful Valhalla Rising, I’ve been aching to watch Mads Mikkelsen execute more bodily harm on people. There’s something about the brutality, specificity, and matter-of-factness that Mads brings to physical violence in his performances that engrosses me. It’s part of what made his Hannibal Lecter so delicious to watch for so many years on Bryan Fuller’s excellent Hannibal.

Netflix’s latest original picture, Polar, a film predicated on the idea that Mads plays a brutal retired killer who gets pulled back into the game, would appear to fit my Mads plus violence related desires to a T. Unfortunately, the movie’s disparate elements and banal sense of early 2000s indulgence turn the experience into more of a chore than an entertainment.

Directed by veteran music video legend Jonas Åkerlund, Polar begins with an achingly terrible sequence involving Johnny Knoxville and a team of colorful assassins, featuring performances and costumes that would be close to camp if they weren’t so rote. It’s unfortunate that so much time is spent with these characters, particularly given that everything about them, from the tone of their scenes to the very quality of how they’re written, is at such disparate odds with the majority of the movie. From there, we’re whisked off to meet Mads Mikkelsen’s Duncan Vizla. One of the top assassins in the world, Duncan is getting ready to retire. It turns out his skeevy boss, played by Matt Lucas, has concocted a scheme where he kills off his retiring employees so as to avoid paying their pension. Somehow this is seen as both a prudent and sustainable practice for a businessman, particularly one who specifically employs vengeful killing machines.

The movie is at it’s best in quiet moments of Mads Mikkelsen attempting to retire in Montana. With no idea what life outside of killing is, Duncan tries to learn what it means to be a normal person. He ends up trying and failing to adopt a dog, setting up his house up for his own birthday (the image of Mads blowing up a single balloon and then sitting quietly surrounded by decorations is incredibly amusing), and teaching local school children about kukri knives and the best ways to slice open a person’s arteries. Mads excels at giving away little things with his eyes in these scenes, whether it’s bemusement or quiet sadness or regret.

Alongside Mads in Montana is Vanessa Hudgens, running away with every scene of hers in the movie. Hudgens isn’t just operating above and beyond everyone else here, she’s basically in a different film entirely. It’s an honest and giving performance, one that took me completely by surprise, not because of any doubt of her abilities (I’ve been a fan for a long time) but because it seemed so out of place with the rest of the movie. Hudgens is giving so much to this movie that I desperately wish the rest of it was operating at a commensurate level.

I truly wish the film had centered on the tentative friendship between the skittish Hudgens and the weary Mikkelsen as they navigated their respective traumas. Their scenes are amusing and sweet and both characters, not used to human interaction, bounce off each other in interesting ways. Alas, the rest of the movie comes lumbering into their quiet lives in the form of those colorful assassins from the beginning of the movie. Then it’s time for a solid hour of Mads Mikkelsen killing people, alongside a bland sequence of torture and a drink with Richard Dreyfuss.

In the post-John Wick world, it was clear that many directors, second unit directors, and stunt coordinators made the effort to elevate their game in regards to fight sequences. Polar has it’s share of these moments. But even in an extended hallway fight scene (that you might mistake for a scene from a Marvel Netflix show), despite how effectively Mads executes his brutal fight choreography (and again, this is particular skill of his), it never approaches the verve or crispness of what Chad Stahelski, David Leitch, and Keanu Reeves accomplish in the Wick films, or even what Leitch brought to bear in Atomic Blonde.

In the end, Polar isn’t trashy enough to be glorious trash, and isn’t good enough otherwise to justify its edgelord indulgence. Mads will always be worth watching (at least for me) but both him and Vanessa Hudgens are operating with too much talent and skill in a film that is wallows in it’s own worst intentions rather than rising to their level.

Chris Evans Reminds you that Animals Rule in the SUPERPOWER... Previous
The First HOBBS & SHAW Trailer is an Ice Cold Can of... Next