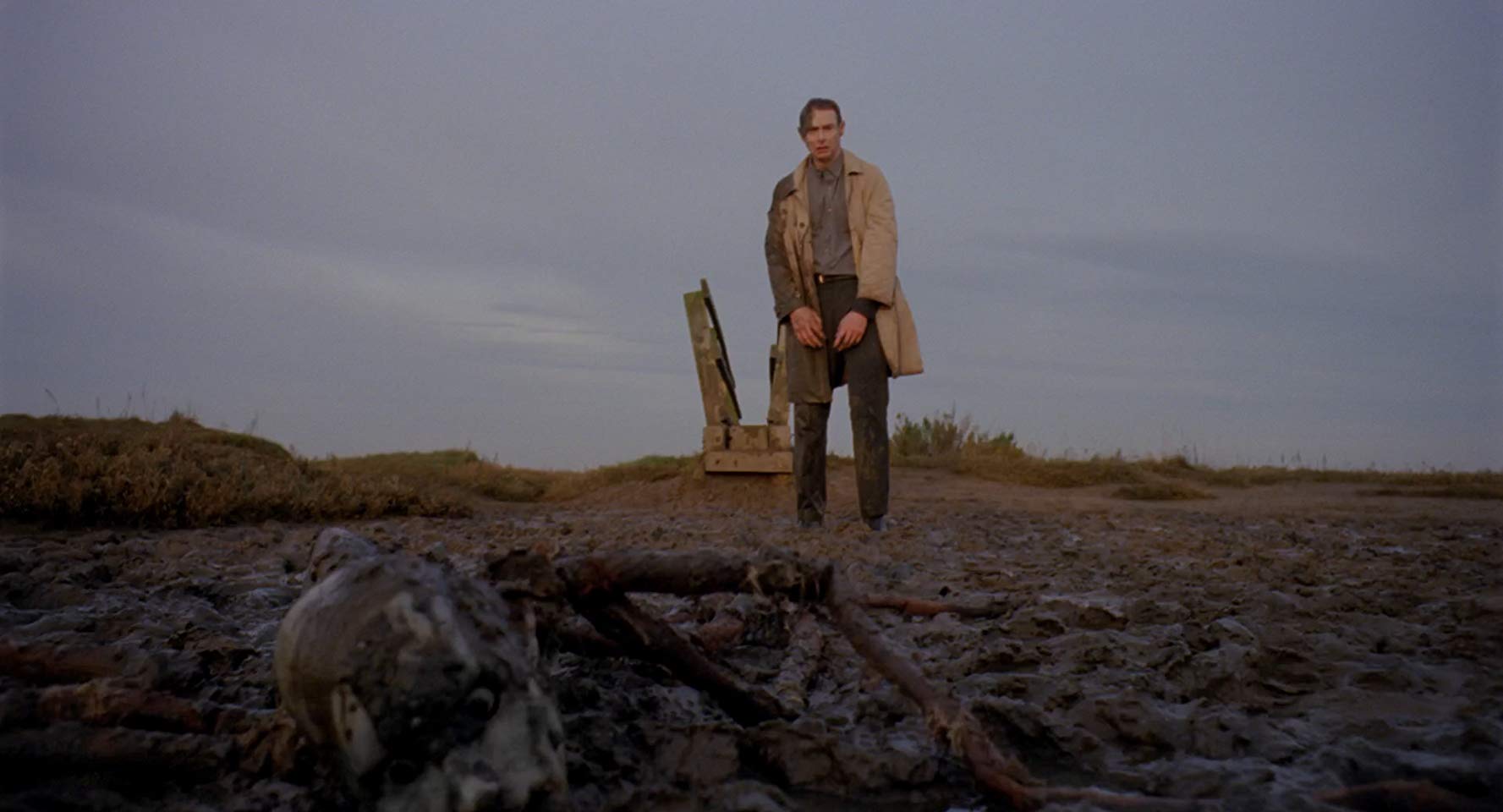 I have a bottomless appetite for microbudget, Lynchian psycho-horror and Matt Holness’s Possum is rad as far as such things go. It is also seemingly in direct dialog with Cronenberg’s Spider, in some ways quite literally–I look forward to thinkpieces on the topic.

There isn’t much plot to speak of, and logically it doesn’t hold together in the slightest (and nor does it need to, though I’m sure it will bother some viewers). Sean Harris, he of the dulcet growl so fitting to international terrorists in a little-known action franchise, excels in a sweaty, semi-verbal role as an aimless inhabitant of a half-burnt, grotty mess of a family home in rural Britain. His body language is remarkably weird and pitiable – the poor thing has no idea how to inhabit a human body. It’s fitting then that he’s a puppeteer of sorts, with an obsessive, codependent relationship with a particularly disturbing puppet he (maybe?) created. The story expands and contracts as he and his puppet venture into his past and present realities (maybe?) in thoroughly off-putting fashion.

It’s another of a number of recent films shot at least in part on 16mm (We the Animals, Mr. Roosevelt, First Man), lending it a colorfully smudgy, suggestive quality – shadows are positively filthy against the grain of this film and it’s much scarier as a result. The format’s recent popularity interests me. I much prefer its effect here to its questionable proxy for memory and nostalgia in We the Animals.

I connected to Possum as a brutal representation of the mind of an artist. Artists transmute their fears, give them shape, or words, or scents or other ephemera that externalize pain that is too great to carry inside without that pressure valve, that controlled bloodlet, that pouring into the world, into the senses of other humans. Sometimes we craft things from our rot that are too ugly, stories that are too awful to repeat without poisoning the hearer. Art is dangerous. Once we expel a tumor and mash its viscera into a new form… then what? What do we do with this material? Isn’t it just our pain given legs and agency? Can’t it follow us, either on its own or thanks to the carriage of fans? Was Tobe Hooper ever free of the demon chainsaw? Even when he least needed it? Was George Romero confronted by corpses in every room he entered? Constantly eating at him?

Possum reminds me a bit of of Cronenberg’s Brood. Its creatures, christened the “shape of rage,”  are a mother’s emotional spawn that hurt anyone who threatens their parent. Such is the awful spider-legged puppet in Possum, a golem, an imaginative abortion that is too horrific for its creator to ever escape. It lives because he lives. He regrets his art, he sleeps with it then turns around and attempts to destroy it – but his art is him and vice versa and he can’t destroy his own fantasies without destroying himself.

There is truth to this.

The older I get, the more I recognize that my fantasies are childhood shades. In middle age, the things that hurt when I was too young to name and describe them are now as familiar to me as my physical body. These terrors just sit there, motionless except when they aren’t – old wounds never really heal, they bleed when poked. In my art and my deeds and my character, I see a constant dance around these fat awful monsters, talking and singing and writing my way toward the illusion of safety. We spend our entire lives running from shadows.

As to Possum: Sean Harris’s waking wound of a man has no choice but to turn and face those shadows. This film, these scenes of him standing before his dark reflections, they are dreadful in a way I neither can nor care to articulate. I’ve had chills since I finished it this evening; the last half hour has imagery that will stay with me forever (even as it flails, probably inevitably, toward its climax). This film makes me feel awful, but it also leaves me determined to question the darkness that I myself have put into the world. Why? Why make horror films and books and music that amplify the spiders that occupy our folds?  Why then spill more pixels in reviews like this? Well, because we have to, of course. Art is necessary and it has consequences.

DIE HARD With a Podcast, Episode 6 Previous
Kevin's 18 Favorite Films of '18 - Part 1 Next