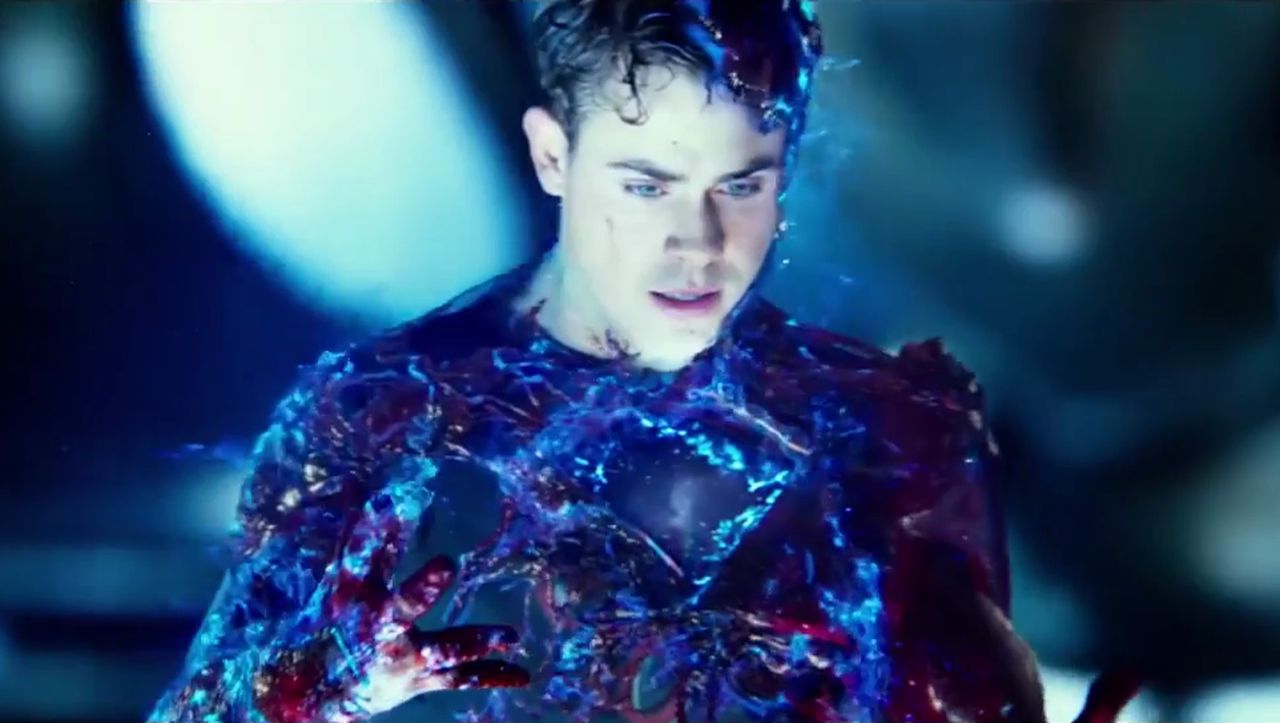 2017’s Power Rangers opens with what I can only describe as a reenactment of Saving Private Ryan‘s D-day sequence, featuring a naked and blue Bryan Cranston cradling his dying teammates and cursing his mortal enemy as a meteor crashes to the Earth, destroying everything. Immediately we smash cut to the present day and a scene centered around a bull semen joke.

Describing that juxtaposition is the best way I can sum up Dean Israelite’s Power Rangers movie, a film created to please…well, I’m not exactly sure who, to be honest. It’s not the dour, hedonistic deconstruction of Joseph Kahn’s Power/Rangers, a tongue-in-cheek satire of gritty reboots for the older crowd, who might crave such things and grew up with the original series. Nor is it light-hearted and pleasant enough to be aimed at children, the only crowd Mighty Morphin’ Power Rangers has ever really been for. The PG-13 rating and general behavior and humor of the characters indicates that the target audience is really the teenagers of today. Given the popularity of superhero films all over the world with young people, perhaps it makes sense to bring the Rangers out of the 5-12 age bracket and into the teen years. What the creators seemed to have missed about those other superhero movies (not to mention the original Rangers series) is having heroes who are, well, heroic.

One of the things I appreciated about the feather-light original series was its dogged commitment to wholesome goodness and heroism. The Rangers never question what they’re doing because they know in their hearts that they’re the good guys who are going to save the world. It’s a very straight-forward and positive representation of good values. Now, it’s not so much that the young men and women of 2017’s reboot aren’t interested in saving the day, it’s that they can’t seem to get around to doing it without a lot of hemming and hawing. Ironic or selfish detachment is the watchword of many of these teens. Appropriate to the age group, maybe, but less so to the material. While expanding the team’s diversity quotient in frankly exciting ways is a feather in Power Rangers‘ cap, along with 21st century values appear to come the requirement for the sheen of dispassion for wonder and heroism that have defined so many properties over the last several years. This (often literally) gunmetal grey aesthetic is so pervasive that when the Power Rangers theme starts blaring near the middle of the climactic battle, it feels completely dissonant with what is happening on screen.

All of the Rangers, save one, are sort of assholes. Even Alpha 5 (Bill Hader, having a better time than basically everyone) and Zordon (the aforementioned naked, blue Bryan Cranston) are dicks to a surprising degree. Zordon’s motivation when the Rangers first discover his ancient ship and their new powers? To manipulate the teens into unlocking the Morphic Field so he can resurrect himself. A dismissive, selfish Zordon is shocking, but maybe not wholly excessive given the theme of “parents just don’t understand!” that runs throughout.

The Rangers themselves are somewhat lightly sketched but ably played by the cast. Character motivation was never a primary concern for Power Rangers (like I said, those kids were happy to be heroes) but here, the Rangers are connected not by a desire to save the world but by their loneliness. There is a perhaps unintentional meta-commentary going on with their respective motivations, though. Our Rangers-of-color, as it were, all have real reasons to be there and to want a sense of purpose and belonging. Zack (soon-to-be-heartthrob Ludi Lin) has a terminally ill mother and fears being left alone after she dies. Billy (RJ Cyler, who steals most of the movie) lost his father and wants to find people who understand him the way that he did. Trini (Becky G., a singer now doing the acting thing and the definite weak link in the bunch) is ostracized and questioned by her family for her sexuality.

Meanwhile, our two white rangers (or half-white, in the case of Naomi Scott’s half-Indian and English Kimberly) are alone basically because they’re bad people. Jason (Dacre Montgomery, who has one of the whitest names I have ever seen) is the star quarterback of Angel Grove High, and throws away his career by committing excessive vandalism and endangering several lives seemingly because he felt too much pressure to perform to expectations. Though there’s an opportunity for Jason to have a personal stake in the plot when it is his father who discovers the emaciated corpse of Rita Repulsa in the ocean, this amounts to nothing (the editing and narrative, though functional, has more dropped plots than there are seasons of Power Rangers TV). Kimberly, meanwhile, and I’m not joking here, has been banished from her popular friend group because they won’t forgive her after she released a nude photo of one of them to the public. It’s a remarkable testament to how likable the two actors are (Montgomery shows serious shades of Chris Pine in the role) that you don’t outright hate these two privileged mooks.

Fortunately for Power Rangers, RJ Cyler (in the form of Billy) is more than up to the task of buoying the movie with charm, heart, and optimism. It’s no wonder that Billy’s Blue Ranger is the bravest of the bunch. He is the first to step onto the morphing platforms, and later to discover that the secret to morphing is to care more about the team than yourself. Billy is also on the autism spectrum, an aspect of his character brought up and touched on, but never criticized or mocked. Billy is a genuinely sweet and funny guy. He’s the heart and soul of the team. Cyler plays a real hero amidst outcasts and frustrated popular kids.

The plot is fairly perfunctory to this origin story: Ranger-gone-bad Rita Repulsa (Elizabeth Banks, giving her all even if it doesn’t amount to much) is trying to locate the life-giving crystal located in Angel Grove so she can…you know what? We never found this part out. That’s okay. She’s evil and she loves gold. Instead of an awesome (and very silly) armored dude with wings, her version of Goldar is a giant gold homunculus. Her putties are formed out of the ground and random objects, and the Rangers have one glorious scene of beating the crap out of them after activating their armor for the first time. There is a genuinely incredible amount of Krispy Kreme references. It’s actually integral to the plot, and one of the silliest shots in the movie features Banks tucking into a frosted glaze donut while destruction reigns outside.

The best moments of the movie, though, are when the team enters its training period after meeting Alpha and Zordon. A montage with humor, bonding, and genuine moments of friendship follows. Kimberly and Trini exercise their newfound dexterity by fighting over the last bite of a cookie at Starbucks. The team laughs and cheers Jason on as he gets the snot beat out of him by holographic enemies. Alpha 5 teaches Billy how to take and give a punch. It’s fun and, maybe because it doesn’t feature moments of rejecting the whole Ranger thing (this happens way too many times) feels the most connected to the history of the franchise.

Maybe it’s unfair to keep comparing this movie to how its tone clashes with the past twenty plus years of Power Rangers media. Maybe a Power Rangers where the kids swear and stumble and talk about killing the bad guy is what the culture is asking for right now. I’m not so sure about that, but the good folks at Universal seem to be confident in that direction.

It’s hard not to root for a movie so nakedly progressive and enthused about prospering it’s nonwhite, queer, and differently-abled heroes. The faces and aspects of the teens in Power Rangers reflect our culture in a better way than most films manage these days, even as Hollywood slowly but inexorably moves towards greater representation for all people, and for that it should be celebrated.

And to be honest, I got pretty pumped up when the Megazord and Goldar were punching each other in the face. And in the end, that’s pretty much what Power Rangers is all about.

Oh I get it, like how you build Lego stuff out of parts!