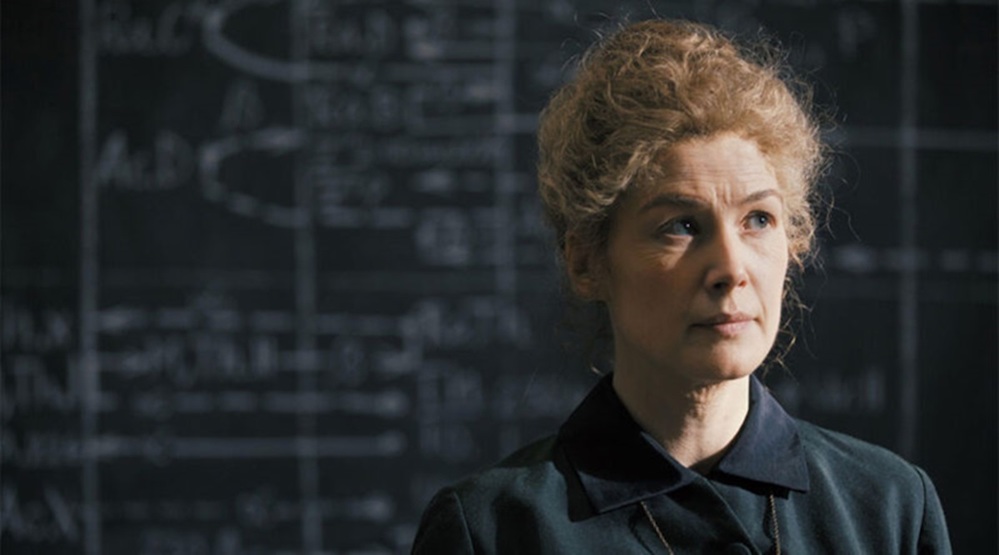 “ Marie Curie needs to think about his entire life before he dies.”

That’s, essentially, how we’re introduced to Marie Curie, arguably the most famous and important scientist in history and winner of two Nobel Prizes,1 in Marjane Satrapi’s Radioactive.2 We see Rosamund Pike in (bad) old-age makeup being wheeled into a hospital on a stretcher as everyone around her says “is that madame Curie?” just in case you were slightly confused about what movie you were watching. Then, in the blink of an eye, we jump back in time to where it all began as her life flashing before her eyes serves as the film’s framing device — a cliché that filmmakers somehow still haven’t realized was played out over a decade ago.

From there, the film is a rundown of all of Curie’s momentous achievements. We see her work with her husband, Pierre, that leads to the discovery of two new elements (Polonium and Radium) as well as their work in the field of radioactivity. Her husband’s death and her subsequent affair with Pierre’s student, Paul Langevin and the effect these events have on her take center stage for the film’s second act. Finally, Curie, along with her daughter Irène, implemented mobile radiography units during World War I, which saved countless lives and limbs for French soldiers injured in battle. Curie lived an incredibly eventful life, and if there’s one thing you can say about Radioactive, it’s that it does capture the volume of her achievements.

The magnitude of those achievements are captured through the film’s main deviation from the biopic form. Satrapi — a strong filmmaker whose Persepolis is a masterwork and her previous film, The Voices, is an underrated black comedy — uses flash-forwards during Curie’s experiments that show what her research would lead to. While sometimes a little corny, these scenes are often the most alive the film comes. These flashbacks range from a child receiving radiation therapy for cancer all the way to the Chernobyl disaster, emphasizing how Curie’s research shaped the next century of human history. This filmmaking trick does lead to the film’s most crass moment, however, as the film’s depiction of the bombing of Hiroshima (including a Little Boy visual pun and a scene dissolve that has to be seen to believe) comes off as gross and exploitative, particularly because nothing is conveyed in the scene that isn’t handled more elegantly with a scene involving a desert nuclear bomb test.

Outside of those moments, there is little in Radioactive that breaks the tired biopic mold. The first half-hour or so, where we see Pike’s Curie being courted by Pierre (Sam Riley) and their relationship blossom both in the laboratory and at home, is carried by the two actors’ chemistry.3 Shortly thereafter, unfortunately, it becomes a rote melodrama that, as is sadly often the case in biopics like these, concocts drama out of events that never happened. The most egregious example being an extended sequence depicting Marie and Pierre’s marriage being strained by Pierre accepting their Nobel Prizes on behalf of them both while Marie stays home with the children. In reality, neither attended the ceremony and their award was accepted by a representative from France. Historical fiction doesn’t need to be slavishly devoted to factual accuracy, necessarily, but it needs to be in service of something more than artificially creating banal drama.

There’s not much else at all to recommend in Radioactive. Pike is giving the exact performance you’d expect from a film like this: committed and professional, but often broad and full of affectation. The most surprising thing about Jack Thorne’s screenplay was finding out it wasn’t written by Anthony McCarten, the reigning king of the stodgy, lifeless biopic. I had hoped that a filmmaker of Satrapi’s talent could have made something more out of Radioactive, but the end product is just a tedious, tiresome bore.