The New Platonic Ideal of a Summer Blockbuster is Here 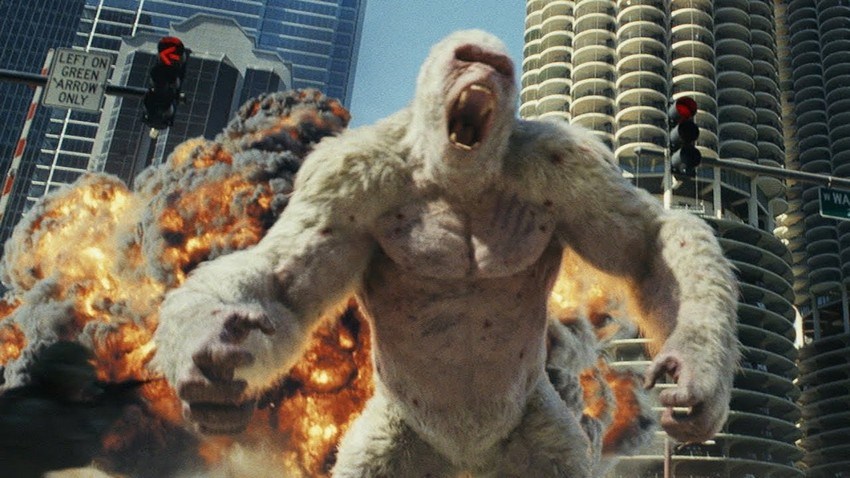 Many blockbusters nowadays feel like they take themselves too seriously. They forget that their main purpose is to entertain and enthrall; they become enamored with the idea of pulling off some great heist on the audience, manufacturing drama or stakes or simply hitting by-the-numbers beats because it’s expected, with no joy or heart at the center of it all.

Rampage, ably directed by Brad Peyton, delightfully eschews all of that by being an almost optimal level of stupid fun. This is a movie which balances The Rock cracking jokes about assaulting military personnel with duplicitous CEO siblings activating an evil radio tower on top of a skyscraper, all while giant, mutant animals wreak havoc and evolve on an unprecedented scale that no one ever stops to question.

Make no mistake: this is a ridiculous movie. And Rampage knows and loves this about itself. From the hilarious Gravity pastiche that opens the film to the moment where Dwayne Johnson once again breaks free of something that shouldn’t be humanly possible and beyond, Rampage time and again proves its willing to show you a good time at the movies. At the heart of it is the most important thing a good action movie can have: personal stakes. Sure, the city of Chicago is in danger (more than in danger, it sure as hell gets its ass kicked in this movie) but what’s really going on, and what we care about, is a man trying to save his best friend. Who just so happens to be a gorilla, who has also been accidentally exposed to a pathogen that mutates him into a savage giant.

One of the most unfortunate casting decisions in recent memory came from Dwayne Johnson choosing to play Black Adam over Captain Marvel in (eventually, although who knows at this point) an upcoming WB DC comic book movie. It’s unfortunate because no one today embodies Captain Marvel, a child’s idealized version of an adult, the way that Dwayne Johnson does. He’s an action figure made real. He’s larger than life, competent but cool, funny but warm, and never quite seems to have time for girls. That’s Dwayne Johnson in Rampage. I keep anticipating his shtick getting old, but to be honest, he keeps getting better. He commits to showing audiences a good time, and he pretty much always delivers.

Johnson plays primatologist Davis Okoye, who ends up embroiled in a fight to stop mutated creatures after one of the gorillas under his care (named George) at the San Diego zoo joins their number. Along the way he picks up disgraced geneticist Dr. Kate Caldwell (Naomie Harris) and reckons with a wise-cracking government agent (who probably went to Secret Agent school with Mr. Nobody) played by Jeffrey Dean Morgan. Morgan is having an amazing time, here, and is happy to let you know it every single time he’s on screen. They also contend with a pair of billionaire CEO siblings, who are as comically whitebread (Jake Lacy’s poptart eating Brett Wyden) as they are devilishly nefarious (Malin Ackerman’s Lite Bond Villain Claire Wyden).

The movie is surprisingly tight for it’s featherlight concept and plot. Characters are quickly established and, barring a couple of scenes where they divulge their backstories to one another, free of moments that feel perfunctory or over laden. By the time the movie gets to it’s smash-em-up climax, it feels absolutely earned, but also doesn’t feel like it overstays it’s welcome. Before it’s done, Chicago and a healthy portion of National Guard troops get well and truly smashed in a scene of complete mayhem as the mutant beasties wreck shop.

Rampage isn’t on a mission to change the blockbuster. It’s not trying to reinvent cinema or titillate you in new ways. But it just may titillate you in old ones, as in make you feel like you might have when watching one of the great 90s blockbusters all over again on a Saturday afternoon on TNT (appropriately, upcoming Lewton Bus Film of the Year The Meg played a trailer before this one and promises many of the same delights). I will say that its ability to pull off an ending that feels both full of pathos and humor is impressive. Davis saved George when he was very young, and George has never forgotten this. It is established early on that the idea of paying Davis back for this is important to George, and seeing how this plays out is not just executed well, but is genuinely moving.

Rampage is simply a delight. The kind of thing that the Transformers films purport to be but never really fulfill. There are so many fun, crowd-pleasing moments, whether it’s a well-timed quip from Johnson, Naomie Harris offering meta-commentary on the film (and being generally badass. This doctor is no damsel, which is a treat) or George beating the shit out of a giant alligator with a piece of a bridge. Rampage is a movie that loves what it’s doing, and it does that thing so well.

King and Kubrick: Adapting The Shining Previous
Kubrickian: Singularity and Influence Next