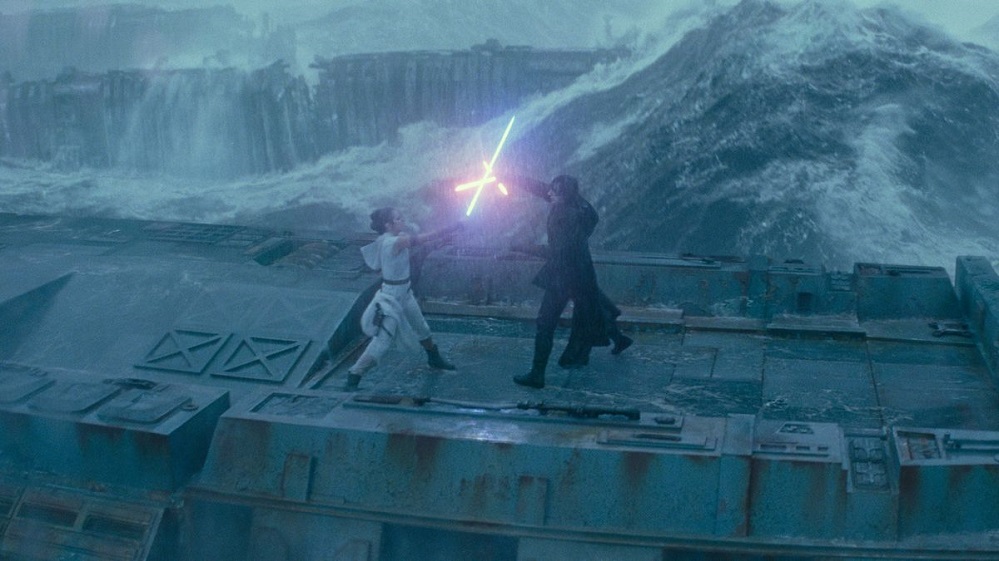 From the second JJ Abrams was hired—after Lucasfilm took two years and one Book of Henry to realize they had made a huge mistake by hiring Colin Trevorrow —I wondered how he would handle finishing something. He’d long been the go-to guy to start projects, (Lost, Star Trek, the soft-reboot of the Mission: Impossible films) but he had always been long-gone by the time they wrapped up. His style works well for those first films in these series, allowing him to be vague and ask questions he has no intention of answering, but actually concluding a trilogy feels somewhat outside of his previously displayed wheelhouse. Bringing him back for Episode IX was a questionable idea to begin with, but it’s even more baffling when you combine it with Lucasfilm’s turbulent relationships with creatives, the extreme (and dumb) response to The Last Jedi that polarized many of the series fans, and the fact that Rian Johnson’s film had done away with much of Abrams’s aimless mystery and ended on a note that could allow the final film to go anywhere.

Which is how we end up with The Rise of Skywalker, a film that combines all of Abrams qualities and faults as a director with a story that takes after Return of the Jedi and seemingly aims to backtrack on the more “controversial” elements of The Last Jedi at every turn. Unlike Return of the Jedi, which heavily relied and built upon the previous two films in the trilogy, Abrams film seemingly ignores The Last Jedi with the exception of that film ending with The Resistance on the ropes. The film opens with messages from the aforementioned, and presumably deceased, Palpatine declaring the end of The Resistance and the rise of The Final Order, causing the characters on all sides to panic. Kylo Ren takes the opportunity to attempt to wrestle and confirm his place as the supreme power in the galaxy, while Finn, Poe and Rey search for clues as to the origins of the messages.

There’s an almost comical element to how the film needlessly backs away from the previous film’s character arcs. Rey and Kylo Ren still have a seemingly co-dependent, antagonistic relationship, still seeing each other in force visions that have only gotten more intense even after Rey both symbolically and literally closed the door on him the last time we saw them. Poe and Finn are still struggling with what it means to be a leader. Supreme Leader Snoke was killed, allowing Ren to potentially become the trilogy’s big bad with no one pulling his strings, but Abrams instead brought back Ian McDairmid’s Palpatine in order to replicate the Vader/Palpatine relationship. In maybe the most cynical (and frankly gross) move, Kellie Marie Tran’s Rose is basically a non-factor, becoming a mere engineer in The Resistance and never really gets involved in the main characters adventures.1

The biggest issue with The Rise of Skywalker is that its narrative is like Abrams (and co-screenwriter Chris Terrio) had an idea for what he wanted his trilogy to be and shoved all of his ideas for both his second and third films here, with zero regard for the character, narrative, and thematic arcs of The Last Jedi. The first half of the film in particular is an aimless, messy, and convoluted series of set pieces and changing through lines. It’s extremely plot-heavy with little else going on under the surface, which would be fine if the sequences of events weren’t completely incomprehensible. There’s a needless clinging to ephemera from the past, particularly in this opening section, as well as a need to rehash past films that is antithetical to The Last Jedi’s thematic pleas to move on from the minutiae of the past. It’s a course correction from Johnson’s vision that, when taken back to back, is whiplash inducing.

The Rise of Skywalker isn’t a complete disaster, though, as once the film settles in and gets to the back-half it becomes laser focused and quite enjoyable. It shifts into an inevitable battle between good and evil, zeroing in on the characters and the action instead of maps and MacGuffins. Even the elements of the film that are exceedingly dumb and feel somewhat unearned work much better in the end than in the beginning. There’s plenty to like in this film, but it’s often a chore to get to those parts.

It’s the performances that carry much of the film, even at its lowest points. Adam Driver continues to be one of the best actors working, and he sells Kylo Ren’s arc in this film in a way that the writing probably doesn’t deserve. The same goes for Daisy Ridley, who gets stuck with arguably the film’s worst character development,2 but her performance doesn’t show it. John Boyega and Oscar Isaac3 don’t get as much to do this time around, but they’re two immensely charismatic performers and their charm is impossible to ignore even when they’re stuck being Rey’s sidekicks for most of the film. I won’t say much about Leia’s role in the film, but Abrams did an incredible job blending the late Carrie Fisher’s cutting room floor material from the last two films into this one—it’s not just a cameo, but rather a full performance that is seamlessly integrated into the film. The biggest success of the Sequel Trilogy from day one has been its cast, and The Rise of Skywalker isn’t an exception.

Given how a third of this series are incompetently made, inadequately acted, and impenetrably written abominations of films, The Rise of Skywalker is still firmly middle-of-the-pack in the franchise. But that doesn’t make it any less disappointing that this is how the “Skywalker Saga” will end,4 even if the final hour or so does just enough to prevent it from becoming a failure—something that is never a guarantee in the Star Wars saga.

In the end, the successes and failures of The Rise of Skywalker call into question the entirety of the Sequel Trilogy and begs, “What the hell happened?” It’s not a bad enough film to make you believe the enterprise was a mistake, but the differing ideologies, creative directions, and by-the-seat-of-their-pants writing style without an overarching theme or narrative direction is painfully obvious here. We’re left with a trilogy that is incoherent as a series, rather than something that is well thought-out, meaningful, and thematically consistent. Lucas may have made the original trilogy up as he went along, but he and his collaborators never wavered on their intent. Here, it’s clear that no one—not JJ Abrams, not Rian Johnson, not Kathleen Kennedy—was on the same page for long enough to make this whole thing work. It’s a shame, because this was a series rife with potential from the get-go, and to see it end with this film is such a missed opportunity.