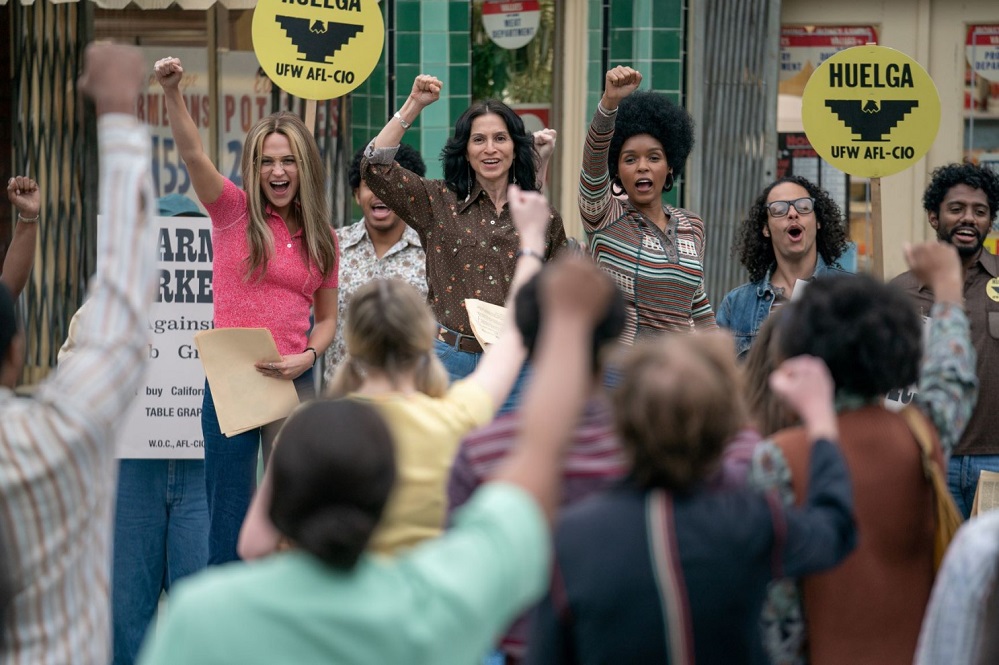 The Glorias kicks off like basically every biopic, with a scene featuring the Oldest version of Gloria Steinem (played in this incarnation by Julianne Moore). The film then cuts back to her childhood upbringing, contrasting who she became with where she started. It’s a traditional framing that belies a far more unconventional vision that the film has of the genre. While The Glorias does hit many of the beats that one would expect from a film of this nature, writer/director Julie Taymor is playing with narrative structure, editing and unorthodox stylistic choices that keep the film feeling fresh and bringing life to what amounts to a (deserved) hagiography of one of the key figures in modern American feminism. It’s a film that sings when the timelines weave in and out and collapse onto each other and elements of surrealism take over, but not every decision pays off, often falling into painful moments that are as poorly conceived as they are cringe-inducing to watch.

That unquestioning devotion to its subject — the film even goes so far as to feature a cameo by the real-life Steinem — is arguably the film’s biggest problem. There’s a lack of friction in the proceedings that makes the entire endeavor feel too easy. The sexism depicted is less structural and systemic and far more focused on cartoonishly pigs of men. Steinem is depicted as a perfect listener and her BIPOC allies in the movement, portrayed wonderfully by Janelle Monáe, Lorraine Toussaint and Kimberly Guerrero as Dorothy Pitman Hughes, Florynce Kennedy and Wilma Mankiller respectively, are her instant friends with zero interpersonal conflict despite the historically immense racial struggles within the feminist movement — the issue of how race affects women is brought up, but it has no real bearing on the proceedings. The film devotes far more time to Timothy Hutton’s traveling antique salesman and vagabond huckster father1 than it does the lives of the legendary feminist women of color who made the movement what it was. Everything feels too pat and easy. The film’s opening scene with Steinem in a rough biker bar being praised by a couple of tough bikers for inspiring as well as a scene where a young Gloria tap dances for a Black barber shop as they cheer her on are perfect encapsulations of The Glorias as a whole: a film that is more interested in praising Steinem than engaging with the messy, complicated journey of the feminist movement of the 60s and 70s.

Which is disappointing, but Taymor is clearly more interested in exploring Steinem than doing a full-blown historical drama about this moment in time. Alicia Vikander and Julianne Moore play Steinem as an adult, interchanging at key moments, giving a glimpse into the regret, pain, and influence certain events had on her. Vikander’s Gloria will be posed with a question, and Moore will be the one to respond, showing how the older version wishes she could go back and change the way she handles certain events. The framing device — the four Glorias (Vikander, Moore, Lulu Wilson’s Teen Gloria and Ryan Kira Armstrong’s childhood Gloria) are on a Greyhound bus having conversations about events of Gloria’s life — is similarly interested in different eras of Steinem’s journey interrogating each other. They challenge each other, wondering why things turned out the way they did: why Gloria didn’t have a family, why she married late in life, why she pursued journalism instead of dance, etc. It’s a clever conceit that brings to mind the pinnacle of the biopic genre, Todd Haynes I’m Not There, though a far more literal interpretation of the character.

Taymor’s career in film, after her breakthrough direction of The Lion King on Broadway, has been at the very least fascinating to witness. Her Titus is an undervalued feature and the rest of her filmography is ambitious and constantly pushing boundaries. The Glorias similarly has aspirations of breaking the genre rules, perhaps inspired by Steinem’s own groundbreaking initiative. It doesn’t always work, but it’s doing its own thing rather than being a boring, staid character piece. It’s a flawed, loud and somewhat facile look at an important figure, but there’s so much energy and filmmaking prowess that those problems often fall to the wayside.

LOVECRAFT COUNTRY Episode 7: "I Am" Previous
Mavis’s Watchpile, Vol. 6 Next