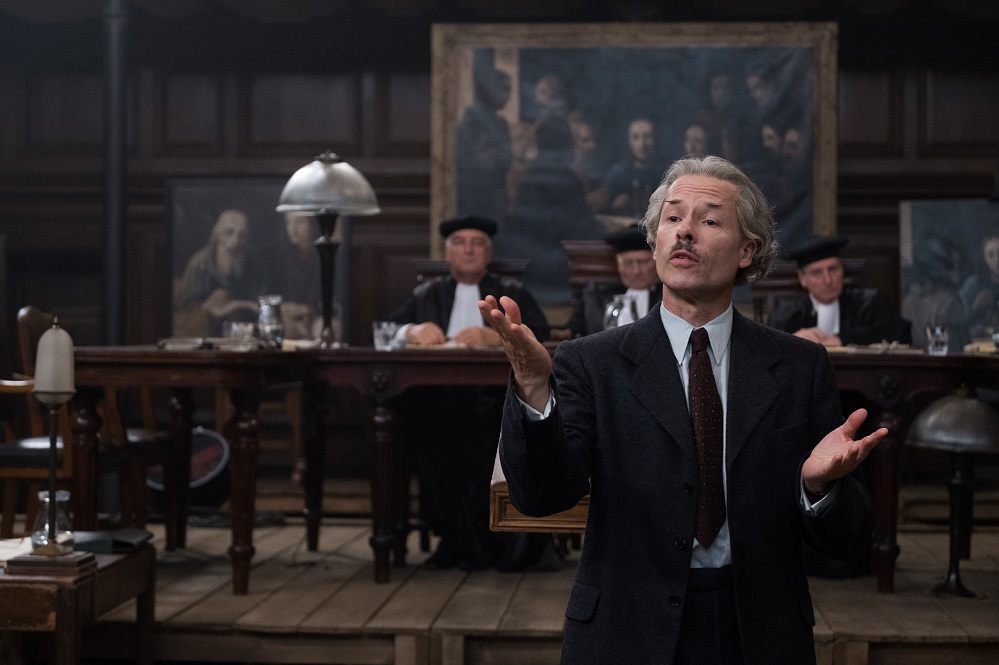 Originally titled and screened at festivals as “Lyrebird“ — after the Australian fowl that has the ability to perfectly mimic the sounds of other birds and wildlife — The Last Vermeer tells one of the most fascinating stories to come out of the rubble of World War II. Han van Meegeren, a seemingly unremarkable artist turned successful art dealer, managed to perfectly forge the works of multiple famous century-old artists, particularly that of the titular Johannes Vermeer. His forgeries earned him a fortune of almost a quarter billion US dollars adjusted for inflation. He also was put on trial for selling one of his yet-to-be-revealed forgeries to Hermann Göring, assumed to have been stolen from Dutch Jews during the occupation and that van Meegeren was aiding and abetting the enemy. The Last Vermeer entertainingly depicts the courtroom drama of van Meegeren trying to clear his name by admitting his life of crime. Sadly, it comes after an hour of tedious criminal investigation and is depicted through the eyes of an uncompelling fictional composite character.

Said character is Captain Joseph Piller, played by The Square’s Claes Bang. He’s a stoic, by the book investigator with a failing personal life who comes to admire van Meegeren. There’s nothing interesting about Piller, which could work if the film simply used him as a means to tell the story. Rather, he is the film’s true protagonist and The Last Vermeer is nearly as dedicated to his clichéd, unengaging arc as it is the movie’s actual subject. Practically the entire first half of the film is devoted to Piller and his assistant Minna Holberg (Vicky Krieps) trying to solve the mystery of how van Meegeren got his hands on a Vermeer and sold it to Göring. Naturally, this is solved offscreen by Holberg — this film might be the worst case of the industry wasting Krieps after her should-have-been star turn in Phantom Thread — and much of the investigation is spent wheel-spinning. When the trial kicks off, and when van Meegeren takes center stage, the film begins to find its groove.

Much of that is because van Meegeren is played by the always-great Guy Pearce. Pearce is the type of actor who makes a meal out of every role he’s given, and The Last Vermeer is no different. He’s charismatic to the point that you almost ignore his ridiculous hair and makeup for the film. The trial scenes give him ample opportunity to monologue about artistic value and critical gatekeeping and he is more than up for the task. Even lines of dialogue about how critics were mean to him — which are almost always eye-rolling to me — land with heartfelt sincerity. Pearce has a blast playing up the multitudes of van Meegeren. The playboy art dealer, the smug criminal mastermind, and the earnest painter just wanting to put his soul on display and be accepted. It’s a wonderful performance

Much of the film’s problems can be attributed to the fact that it was directed by a first time director with minimal formal training and experience. Dan Friedkin,1 a multi-billionaire turned film producer (The Mule, Destroyer, the aforementioned The Square), does very professional-looking work in his debut as a director. The Last Vermeer has a nice, if unremarkable, look aided by Academy Award-winning cinematographer Remi Adefarasin. The technical aspects of the film are perfectly adequate. It’s Friedkin’s lack of storytelling experience that sinks the film’s lowest moments. Too much of the plot is consumed with Piller’s investigation, which mostly goes nowhere. It’s fundamentally the least path to take van Meegeren’s story, which also comes down to the script penned by Iron Man scribes Mark Fergus and Hawk Ostby along with John Orloff (Anonymous, Legend of the Guardians: The Owls of Ga’Hoole). Friedkin rights the ship enough with van Meegeren’s trial and focusing on Pearce’s performance, but it does feel a bit too little too late.

The Last Vermeer is a story with immense amounts of potential, both in terms of the captivating historical account and in terms of the cast and crew this film assembled. The final result, unfortunately, is extremely mixed. The first half drags where the second half is lively and snappy. The early section isn’t bad enough to negate the strength of the trial scenes, but the opposite isn’t necessarily true either. There’s enough in The Last Vermeer to recommend while simultaneously being, overall, fairly unimpressive. It’s, for lack of a better way of putting it, the Larry David gif in movie form.

Off The Beaten Path: WE ARE YOUR FRIENDS Previous
Everyone's Wrong About Ratched Next