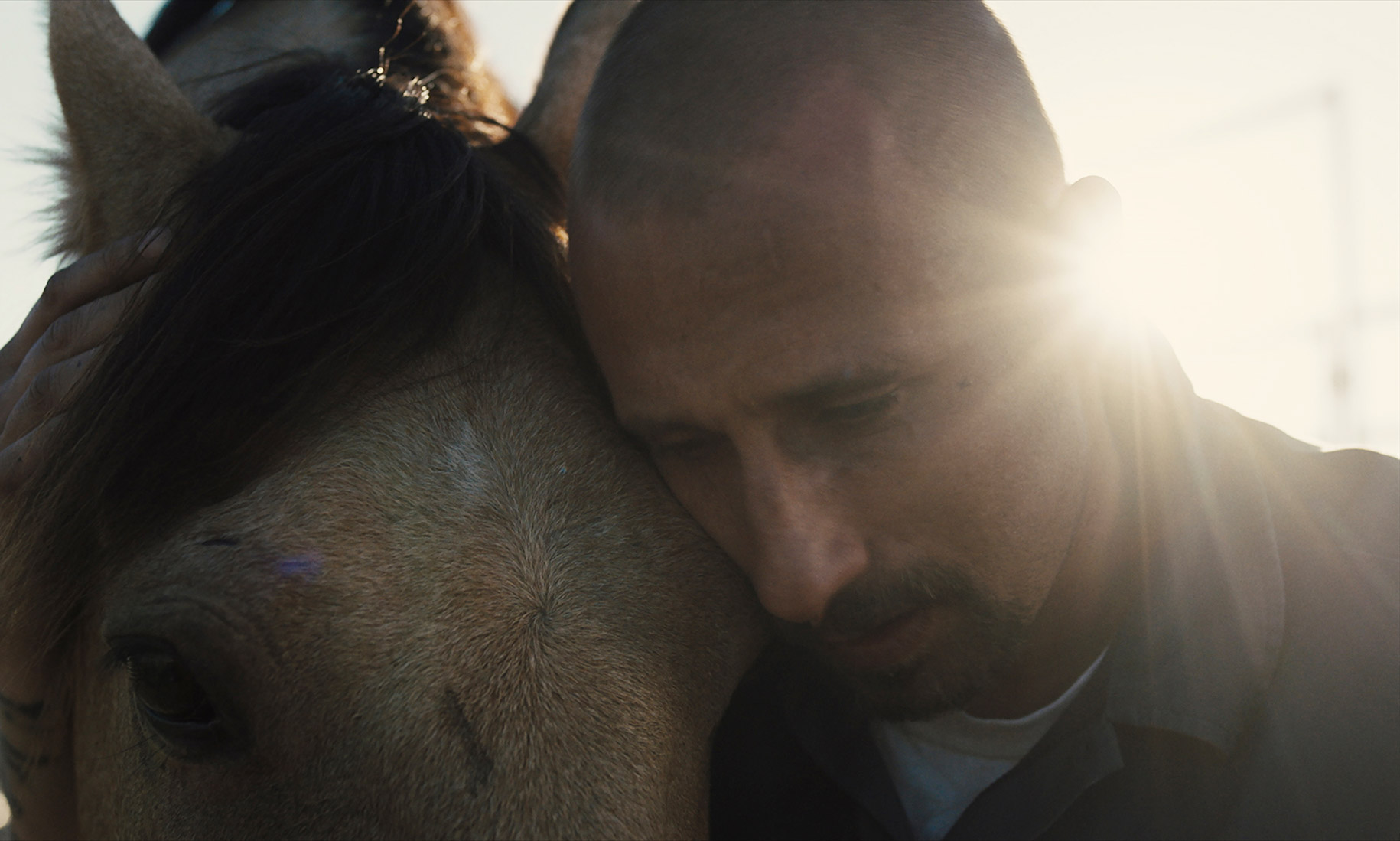 Men discovering emotional vulnerability and finding a path to spiritual recovery through animals is a well worn trope. Horses, in particular, have been at the forefront of these depictions more often than not, owing to the immense influence of the Western in cinema’s early history and the massive significance the beasts have had in the history of Europe and America. Even in the past decade we’ve seen multiple stories of the connection between man and horse, from War Horse to Lean on Pete and The Rider. The Mustang doesn’t transcend or break free from the formula of the man-and-beast genre, but the performances and direction elevate it into something beautiful.

Matthias Schoenaerts stars as Roman Coleman, a violent, anti-social criminal serving out his sentence at a facility in the middle of the plains of the American West. Due to overpopulation, wild mustangs are round up by the US government and sent to the prison, with the prisoners as free labor to care for and eventually break the horses so they can later be sold at auction. While working outdoor maintenance, Roman is drawn to the wildest horse in the facility and is offered an opportunity to work with the horse by the head of the program, Myles (Bruce Dern). Fellow convict Henry (Jason Mitchell), the star trainer of the program, serves as his mentor, helping teach Myles how to connect with the horse while slowly breaking Roman’s aggressiveness himself.

Schoenaerts crafts an impressive performance as Roman. He’s a menacing, imposing presence, making it easy to buy into the character’s violent tendencies. We’re introduced to him staring down the prison’s psychologist, refusing to answer her questions and demanding to go back to his cell. So much of Roman’s early character work is like this: glowering quietly and wishing that everyone would just let him suffer through his sentence in peace. And as Roman’s arc develops, so does Schoenaerts’ performance. Roman’s moments of vulnerability are brought to life by Schoenaerts control of the character. He never magically transforms into a man in complete control of his mental and emotional state, and Schoenaerts never plays him as such. At the end of the day, he’s still just as broken as before, but his “redemption” is in realizing this and allowing himself to heal.

The supporting performances by Bruce Dern and Jason Mitchell are equally important to the film’s successes. Dern plays the curmudgeonly Myles with a lived-in aura that immediately conveys that he’s seen-some-shit. Myles is a tough-love type teacher, and Dern brings this cliché to life through a crotchety affability and genuine love for the men in his charge. He loves the horses he trains, and his cold demeanor towards Roman is because of the lack of mutual trust. Bruce Dern is an all-time great, and this is another incredible performance — along with Nebraska, Hateful Eight, and Chappaquiddick in what has been a remarkable reinvigoration of his career.

Similarly, Jason Mitchell elevates a boring role on paper through sheer charisma. Mitchell, since he was brought to the limelight as Eazy-E in Straight Outta Compton, has been one of the most immensely watchable actors in recent years. His role as Roman’s mentor basically means he sits around on top of fencing spouting platitudes about how to connect with horses, but he truly makes you believe every word. There isn’t a lot of depth to what he’s doing, but sometimes the pure allure of star power is enough to take a forgettable role and make it something memorable.

While the script by Laure de Clermont-Tonnerre, Mona Fastvold, and Brock Norman Brock isn’t predictable, Clermont-Tonnerre’s direction makes it all come together elegantly. A first-time director, Clermont-Tonnerre finds beauty in the sweeping desert and mountain ranges of the American West. She captures both the magnificence and grace of the titular animals without glossing over their terrible strength and power. Ruben Impens cinematography is gorgeous without being overblown. The Mustang isn’t showing off for the sake of it.

Which really is The Mustang’s biggest strength. There’s zero pretension or sweeping sentiment that drowns the film by becoming maudlin. Clermont-Tonnerre might not buck1 the conventions of the genre, but her film is a testament to the way that performance and direction can overcome formulaic storytelling. But formula exists for a reason: it’s an effective way of storytelling for artists and audiences alike. The Mustang might not break new ground, but it makes up for this narrative and thematic familiarity through forceful performances and wondrous imagery.