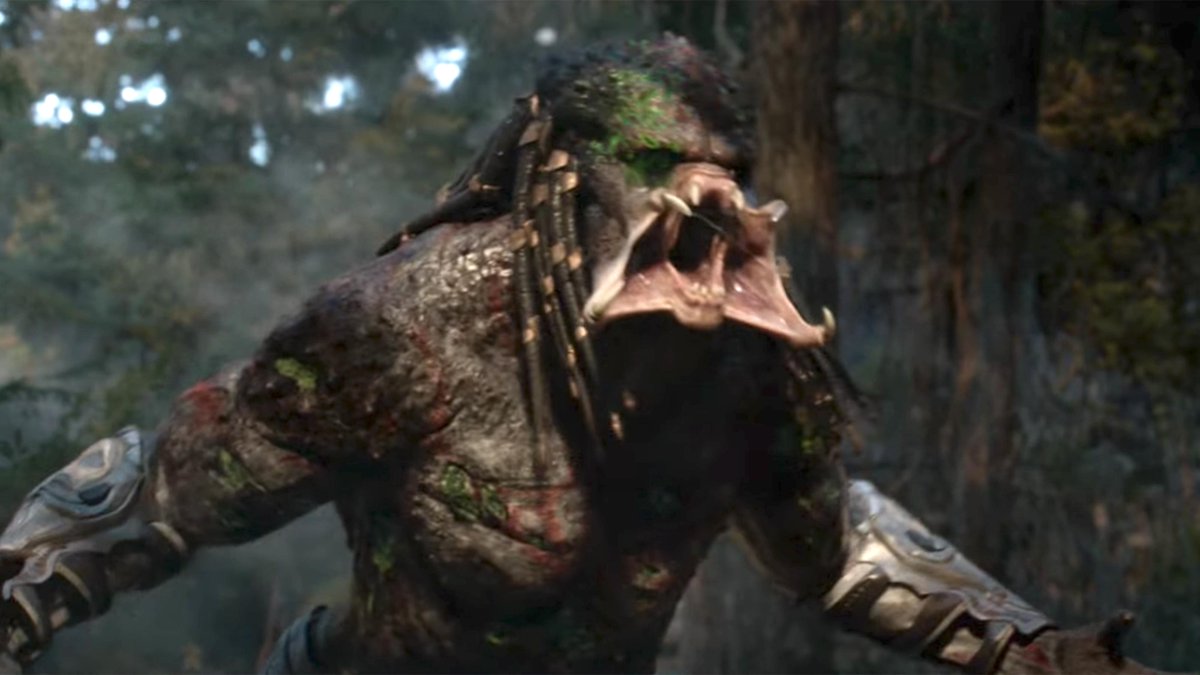 Deep in the jungles of a Black & Dekker screenplay, a team of kinda-funny toughguys are being hunted. Their adversary is advanced, evolved, and merciless. His weapons are serrated and honed for the task.

His mission: to cut the life out of every character, and slash every scene to ribbons.

His name: … I don’t really know. Somebody at Fox? I mean, I don’t want to land all of this at the feet of Harry Miller. I don’t know him like that.

You’re probably picking up on the inference that The Predator is not very good. And I’m just going to come right out and say that you are a very astute reader. You should maybe review films. I’m going to warn you now that I am going to delve into what I guess you could consider SPOILERS FOR THE FILM The Predator (but not until later, and I’ll warn you, I promise). And while I normally wouldn’t do that, I’m going to tell you right now that nothing I ‘spoil’ is going to matter. Because not a lot of the events in this movie carry much in the way of pivotal weight. Earlier, you cleverly picked up on my subtle suggestion that maybe the movie is not very good. The fact of the matter is that it isn’t. It’s got some really fun moments, some great interactions, a very good cast (mostly), and at least a little of that old Shane Black charm and swagger that we’ve come to revere over the past thirty-some years.

Unfortunately, The Predator doesn’t have any investment whatsoever in being a story. It’s got loads of plot, that’s for sure. It’s got things that I think are supposed to be twists and reveals, I guess.1 And it’s even got things that, in a capable editor’s hands, would probably qualify as badass moments. What it doesn’t have is any reason to exist. Now let me be clear; I’m not the kind of person who expects a movie to prove to me that it is worth my time, or has some great knowledge from on-high to impart to me. I’m in love with loads of genre trash that could be easily discarded forever, leaving the world absolutely unaffected by its absence. I’m the kind of person who is more than willing to meet any and every film on its own terms, and accept its craft and perspective as gospel for a couple of hours, provided it’s executed with a little conviction. I’m more than happy to be led by the hand and accept the world a film wants to show me and the story that it wants to tell, so long as it wants to do either. So when I say that The Predator has no reason to exist, I’m telling you what the film told me. The Predator doesn’t know what it wants, doesn’t know what it is, and doesn’t particularly care, either way.

The Predator, co-written and directed by Shane Black, is the fourth movie in the series proper that began with 1987’s Predator. That film starred Arnold Schwarzenegger (and featured a cameo by Black), was directed by John McTiernen, and is a modern action classic. But it had every reason to be a piece of schlocky c-grade piffle, totally forgotten. Seriously. At one point, the film was set to feature a then unknown Jean-Claude Van Damme in a cheap crab suit chasing soldiers around the jungle. The reason why it didn’t, and the reason why practically every person you’ve ever met knows the film is because McTiernan, Schwarzenegger, Stan Winston, and Alan Silvestri had a great concept, and did everything in their power to make that exact movie. The team that made that film knew precisely what they wanted to make, and they set out to make that movie a reality. There’s a saying that I am fond of, and it’s that a mediocre plan, perfectly executed, beats a perfect plan, never begun. Every time.

No, but really. This almost happened.

I don’t know what movie Shane Black set out to make, because I’m not psychic. The film doesn’t want to be a Predator movie, since it sort of goes out of its way to avoid anything but the surface trappings. And it doesn’t really want to be a Shane Black movie, either. Because it’s caught up in a bunch of kind of boring Predatoring plot until it decides it doesn’t want to be. It’s not really a movie about soldiers. Or PTSD. Or family, or camaraderie, or predators, or climate change, or preda-dogs, or evolution, or… anything. All of that stuff is there, but none of it is there. There’s very little in the movie that really matters. And most of it, while enjoyable enough in an easygoing way in the moment, has been leaving my brain with rapidity from the second it ended. Mostly, that is, except for the truly weird stuff that made it from some draft written in the 90s sitting in a drawer somewhere.

Take Jacob Tremblay’s character, for instance. The son of our main protagonist, uh… (checks notes) John Predatorsniper. Tremblay plays a character who is on the spectrum. I can’t with any reasonable certainty tell you what spectrum, but I can tell you that he’s got magical powers of learning and understanding and solving anything the plot requires. See, that’s because, as we are told more than once, people on the spectrum in the area of Asperger’s or, for lack of a better word, Autism… are maybe (or definitely) the next step in our evolution. Don’t get me wrong; Tremblay does a really good job for such a young kid swimming in waters with all this nonsense. He’s downright charming, and has one of the better zingers in the movie. But, why are we still doing this? Mercury Rising was a long time ago, and I’m fairly certain that nobody in this century has been burning to recapture its dubious glory. Also, there is a subplot in this movie about a preda-dog that gets shot in the head and then kind of becomes a big dumb pal to the main group of protagonists. But also, kinda not?

Oh, and one more thing: None of the problems I’m talking about above really land as movie-killers. In fact, they’re pretty benign, all things considered, but they stick out now because they’re a symptom of a bigger problem the movie has, which slams into focus in the final scene which is the absolute worst scene in not only the film, but in any movie this year. At the end of the film, we finally discover what ‘good’ Preddy brought us as a gift. It’s a scene that is worse than any tacked on Marvel stinger, except they felt the need to tack it into the narrative, despite the fact it actually makes no sense whatsoever given the story that preceded it. It’s just a scene meant to set up another film or two. Weightless and adrift, and demonstrating the utter lack of care that went into the story.

SPOILERS ARE OVER. SERIOUSLY, NOT THAT IT MATTERS.

And this is the problem. While Boyd Holbrook and Keegan Michael Key and Olivia Munn and Sterling K. Williams and Tom Jane and Trevante Rhodes all do some pretty decent work, and bounce off of each other decently, all of this stuff just kind of… happens. The Predators are on Earth to do things for reasons. Reasons that don’t make any sense, don’t fit with anything that we know of the creatures, and don’t matter to anyone in the story. At all. In full transparency, I’m a big fan of the Predator movies. And the key ingredient in a Predator movie is that it should never, ever be a movie about Predators. A good Predator movie is just a regular genre movie, and then suddenly there’s a Predator. That’s it. That’s how you make them. The Predator can’t decide if it wants to be a movie about the nonsense the Predators are up to, the nonsense the humans thinking about those Predators are up to, or something in between. It’s a movie that doesn’t know what it is, doesn’t know why it is, and doesn’t know what to do about any of it. And that’s also why it commits the single big sin that always tells you you’re in for a bad time: We get a Predator, but we also get a bigger, more evil Predator. Pretty much any time your movie tosses in the idea that a bigger version of the creature is what’s going to amp up the stakes, you’ve probably got a turkey on your hands. That’s just math. I’m sad to say that Shane Black’s The Predator should probably be flushed out and left for the preda-dogs.