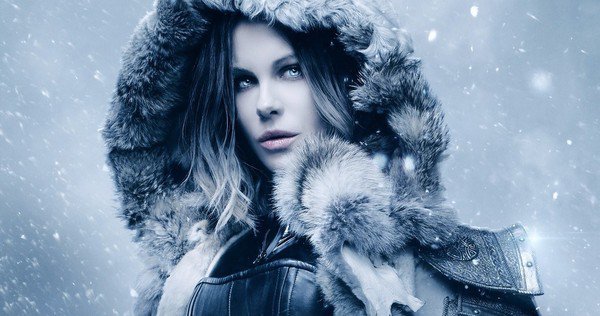 At this point in time, you are either on board with the Underworld series or you’re not. Blood Wars is the franchise’s fifth outing, and by now the lore had become a byzantine mess that’s equal parts camp and self-importance. Seriously, you would have better luck trying to decipher the Voynich Manuscript.

To recap (very) briefly, in a world that’s essentially an Evanescence album brought to life, vampires and lycans have been warring with each other for centuries. On the side of the vampires is Selene, a Death Dealer who served her coven loyally for many years, but the shenanigans of the previous movies resulted in her abandoning her coven and going on many misadventures with her lycan lover, Michael (sometimes Scott Speedman, sometimes a body double). In the previous film, Awakening, Selene is about to run away with Michael (in body-double form this time), only to be captured by some non-descript soldiers. She wakes up, finds that she has a daughter whose blood is special, and something, something, big CGI werewolf gets blown up from the inside by a grenade filled with silver dust.

Despite being a direct sequel, it’s not required viewing in order to understand Blood Wars. Partially because there’s a recap of the entire series at the start of the film, and partially because Blood Wars feels entirely disconnected from Awakening. Gone is its techno-futuristic world, and in its place is an aesthetic that is best described as “Game of Thrones meets goth-rock”. I can’t help but feel that this decision was made because someone high up saw how popular Game of Thrones was and they mandated that the franchise needed to follow suit. But since it resulted in the inclusion of vampire Valkyries, I’m not complaining too much.

In this installment, the lycans have a new leader named Marius (speaking of Game of Thrones, Edmure Tully himself, Tobias Menzies) and he plans to lead an assault on the last vampire coven, thus wiping them out forever. We’re never given a concrete reason as to why Marius holds such a burning vendetta against the vampires. One can only assume that his motivation is the same as any other person who happens to be waging an intergenerational blood feud – they’ve been doing it for so long all they know is hatred for the other side.

He seeks the blood of Selene’s daughter from the previous film because… it’s special, even though he already has access to special blood (which he is running out of, to be fair). Marius as an antagonist is nowhere near as compelling as Michael Sheen’s Lucien or Bill Nighy’s Viktor, but that’s because the movie doesn’t really give him much to work with. What redeems the character is that all of the campiest moments originate from him. He’s the one who gets the silliest werewolf form, he’s the one that fights Selene naked in the frozen tundra. Plus, Menzies brings an intensity and physical presence to the role which makes him fit more in line with the roughneck aesthetic of the lycans than Michael Sheen did.

On the vampire’s side, we have a new player in the great game. Semira (Sherlock’s Lara Pulver), who’s called Thomas (Charles Dance, another Game of Thrones cast member) to the last remaining vampire coven to ask a favour of him. She wants him to petition the vampire council to end Selene’s exile so she can come back and train their new recruits. She asks Thomas to do this because, despite being a member of the council herself, she doesn’t command the same respect that he does.

Semira as a character is pretty thin, she aspires to… power? Revenge? It’s not clear. Still, she’s realised perfectly by Pulver, and to be frank, I don’t think we’ve ever had such an overtly sexual character in the Underworld franchise. While sex appeal has been a part of the series since the beginning, Semira is the first character where sex appeal is her main conceit. However, her character doesn’t exist to merely be looked at. Instead, she uses her sex appeal as merely another weapon in her considerable arsenal.

Theo James returns as Selene’s protege, David, and I swear to God, if they’re setting him up as a possible love interest to Selene I will quit the series. James’s acting isn’t noticeably wooden, in fact, he’s entirely unremarkable. But in a series that lives and dies by its camp, being unremarkable is the worst thing anyone could say about your character. I don’t resent his presence, but I do not celebrate it, either. He’s just… there.

And finally, we come to the star of the show, the sole reason this franchise continues to exist, the effervescent and ever beautiful Kate Beckinsale. If you liked her in the previous movies, you’ll like her here. Selene hasn’t changed much, and Beckinsale has done this for so long that she can play the character in her sleep. But this time round, there is a world-weariness to Selene. She’s been doing this for too damn long, and all she wants to do now is maybe find a nice cottage by the sea and retire. When the world conspires to drag her back into the war, you half-expect her to exclaim “I’m too old for this shit”.

I mentioned before that Blood Wars is only a “perfectly acceptable” entry into the series. That’s because, unlike the previous movies, character motivation is kind of flimsy, and the plot is a bit nonsensical. Still, this isn’t enough to sink the film, because the best decision this franchise ever made was to hire veteran character actors to play its major roles. Each of them utters their nonsensical lines in their nonsensical scenes with the utmost sincerity. I will never forget the scene where Semira gives a monologue whilst receiving cunnilingus with all the self-importance one would expect to see in an Iñárritu flick. And it brought back fond memories of Michael Sheen and Rhona Mitra having zero-g sex on the edge of a cliff in Rise of the Lycans. Fun times.

In regards to the more technical aspects of the film, as much as I hate to admit it, the editing blows. The majority of the scenes feel compartmentalized from each other, there’s very little flow or continuity. The entire movie feels as if it was squeezed into an arbitrarily mandated running time, which made the entire narrative feel like it was hacked off at the knees.

Still, director Anna Foerster – who was a cinematographer before helming Blood Wars – lights her shots perfectly; the scenes in the frozen fjords of the vaguely Scandinavian vampire coven of Vardor are absolutely gorgeous.

I may sound like I’m tearing Blood Wars a new one, but I genuinely liked the movie. The action scenes are equal parts thrilling and goofy, with the gore having been noticeably ramped up. The effects are still as silly as ever, and I’m so glad they brought back some of the hokey puppet lycans. They were sorely missed in Awakening. But at the same time, I can’t help but feel that this entry really doesn’t rise above “decent” because of my aforementioned points.

Still, the heart of what drew me to this franchise is still there, and I can definitely say that if I had seen this movie when I was still in high school, I would have written a six-part fanfic epic immediately after my fifth viewing. And with these sorts of movies, that’s really all I can ask for.

A few more errant thoughts that didn’t warrant their own section:

– Was that Daisy Head’s real tongue, or was it CGI?

– Whatever happened to the detective from Awakening?

– Holy shit! Was that a woman amongst the lycan ranks?

– The lycans themselves are getting too bulky, they look like furry gym rats who abuse steroids.

– How come the vampires and lycans are so white? At least there was a token black member on both sides in the first movie.

Review: SILENCE Previous
A Trailer for 2016 Next

Review: THE ONLY LIVING BOY IN NEW YORK