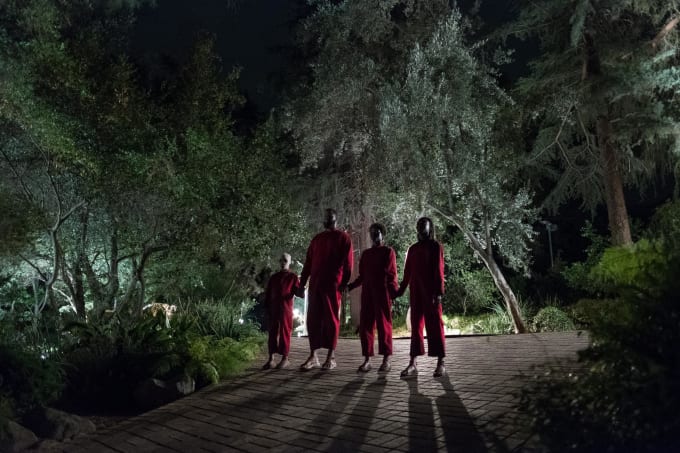 I wouldn’t be surprised if Jordan Peele is a fan of Walt Kelly’s Pogo. It was an excellent, hilarious and incredibly influential comic strip, and Peele strikes me as a man of taste. More specifically, I can see Pogo’s tendency to use genre tropes in the service of social commentary appealing to his sensibilities. With his directorial debut Get Out, Peele tackled the oblivious racism of rich white liberals, and the objectivization of black bodies, using horror, comedy, and even science fiction, causing much hand-wringing among the “But is it really horror?” crowd. With Us, his follow up feature, Peele has delivered something more traditional in its use of genre tropes (until it isn’t) and more experimental in other ways. It’s as political as its predecessor, but aimed in a different direction: inward.

Us also takes Pogo’s most famous line of dialogue and makes it literal: “We have met the enemy and he is us.”

The film opens up in 1986. A young Adelaide is on a family trip to the beach in Santa Cruz. After her father wins her a kickass “Thriller” t-shirt from a carnival booth, she wanders away from her parents and stumbles across a fun house. Lost in its hall of mirrors, she encounters a seeming doppelgänger of herself. The experience clearly affects her, leaving her unable to speak.

Modern day: the now-verbal Adelaide Wilson (Lupita Nyong’o) is married and has two children. Her husband Gabe (Winston Duke, reuniting with Nyong’o after Black Panther) manages to convince her to take a trip to the beach, despite her understandable phobias about the place. Once there, Adelaide begins noticing omen after omen. Doublings, coincidences, alignments. When the Wilsons return home, all of those omens manifest in the form of four figures in identical red jumpsuits, standing motionless in the driveway; figures that happen to look exactly like the Wilsons.

What follows is largely a traditional home invasion horror film, albeit an extremely well done one, centered around a very unnerving conceit. Peele has yet again proven his ability to balance terror and humor, often in the same scene, using one to help pace the other, from moment to moment. Jokes near the beginning of the film payoff in action or horror beats later, or vice versa. While in some ways this is more of a traditional horror film than Get Out was, it’s also more of a comedy, although it never veers into self-parody.

The central cast, playing dual roles, is uniformly1 great. Nyong’o is the standout, playing both Adelaide and her double with equal skill, even as the latter is often barely capable of speech. Winston Duke gets to display his comedic chops yet again, this time not as a mighty warrior king but as a goofy dad who enjoys embarrassing his kids. For their part, the kids (Shahadi Wright Joseph and Evan Alex) are excellent, displaying a disturbing physicality when playing their doubles, in stark contrast to their (mostly) cowering main roles.

Watching the movie barrel toward its climax, I was a bit wary of where it was going. As laden with exposition as the film ends up being, not much is explained in detail, leaving some elements of the premise mysterious if not outright nonsensical, but I think it works really well in the end. The last act feels at times like a mixture of surreal arthouse and Dario Argento, focusing more on “dream logic,” theme, and visceral effect rather than literal sense. That may be a deal-breaker for some, but I ate it all up. If nothing else it’s gorgeous, thanks to cinematography by Mike Gioulakis (It Follows, Split).

With Us I have to wonder if Jordan Peele is doing some introspection. Between acting, writing, directing and hosting,2 he’s become a Hollywood golden child, prompting obnoxious comparisons to older, more established filmmakers. He has to be doing pretty well for himself, financially, and being the socially conscious fellow he is, I’m guessing that’s something he’s given a lot of thought to. While what Us is saying is not quite as overt and barbed as Peele’s last film, there is still a through-line of class guilt and resentment. We never find out what the Wilsons do for a living, but it’s clear they’re doing well enough to afford a nice big house on a lake with a motorboat, even if the latter is kind of a piece of junk. Us in its own way asks, “What was the price of achieving that?”

It also includes fluffy animals. Walt Kelly would be proud.

Event: ROAD WARRIOR at the Uptown Club Previous
Things We're Digging This Week - Week of 3/18/19 Next