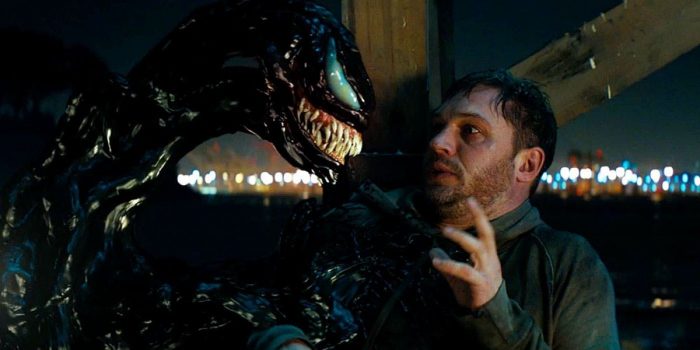 Why do people like Venom? This is a thought that floated through my mind as I sat amidst my rather large and raucous crowd awaiting the screening of Ruben Fleischer’s Venom, a film based on the now thirty year old Marvel property created by Todd McFarlane and David Michelinie. There are some easy answers, of course. Nostalgia for a piece of their youth being perhaps the top one. The idea of Recognizable Property + 21st Century Effects = Profit has certainly been a successful gambit for many a franchise at this point, with the Marvel Cinematic Universe being a dramatic outlier alongside less savory attempts at “Hey, you used to like this shit, right?” like Transformers or Jurassic World.

But maybe people like Venom for even simpler reasons than recognition and the brief, fluttering delight that childhood memories often bring. Maybe it’s just that he kind of looks cool,1 or it’s that he’s a dark reflection of that goody two-shoes, Spider-Man. And as much as those folks might love Batman, he doesn’t bite people’s arms and legs and heads off and have big teeth and stuff.2 And as we have all learned over the years, or at least been told enough times by every superhero film producing company in the business, ultra-violence is dark and gritty and mature and must be respected.

All of which adds up to 2018’s Venom being a very peculiar movie. With its centerpiece being one of the crowning epitomes of 90s comic book excess, it must be swimming in some of those less-than-savory ideologies mentioned above, right?

Multiple times throughout Venom‘s runtime, people look Eddie Brock square in the face and call him a loser. And they’re absolutely right. He’s the “reckless, badass lone wolf” archetype who ends up destroying his entire life thanks to his inability to not be an asshole. Then along comes Venom, an alien symbiote introduced with a fantastic lack of fanfare in the opening minutes of the movie (there is very little time wasted on exposition here, a boon for the movie). Eddie and Venom don’t meet right away, but once they do, it’s a match made in heaven.

For you see, Venom is a loser, too.

Only slightly more emotionally mature than the stunted Eddie Brock, Venom is able to admit out loud that he’s a loser, but he embraces this part of himself. He’s a selfish git. As soon as he decides he likes it on Earth (and hanging out with Eddie) he’s willing to betray his entire species. Frankly it’s a rather brilliant idea. If an advanced species ever did want to invade Earth, we’d probably have a much easier time winning them over with tater tots and reality television than through military might. Rather than take the easy route of portraying Venom as an unbridled dark and cool badass he is believed to be,3 Venom actually turns this on its head. Venom and Eddie are both jerks, but, unlike the comics, where their relationship is definitely toxic, the movie shows the accidental connection between the two eventually bring out better sides of one another.

Feeling cobbled together yet remarkably straight-forward, Venom chugs along its merry way, some sort of plot happening in the background while the stars of the show, Tom Hardy (as Eddie Brock) and Tom Hardy (as Venom), go about their day. Often the best parts of the movie are when Hardy is arguing with himself in public, Venom indignant at having to follow Earth customs. The symbiote has a pretty steep learning curve when it comes to acceptable Earth behavior; he would rather eat people and sit on top of buildings than learn how to, uh, not eat people. The best parts of Venom are in these moments, when a twisted version of Pygmalion plays out as Eddie attempts to teach Venom how to act and behave.4 It should be specified here that Eddie Brock is no Henry Higgins. Actually, that’s sort of what works so well about the relationship between Eddie and Venom. Both being losers, it’s remarkably hypocritical for either of them to call one another on their shit. They both know this and come to terms with it fairly early on. Eddie starts to let Venom pretty much do what he wants (within reason. No eating cops, Venom! Too bad) while Venom even does Eddie a solid by encouraging him to reach out to his ex-fiancé (Michelle Williams, having a decent enough time), going so far as to finally get a tearful Eddie to apologize for his terrible behavior in the past that ended their relationship. Venom is a solid dude. Large swaths of the movie are a remarkably adept argument for how well a Venom-based sitcom could work.

But something else is afoot, and it is the plot hammered into this thing. Riz Ahmed plays Elon Musk, a cartoonish, sociopathic bad guy scientist hell bent on sending humanity (or just himself) to the stars. Ahmed plays Musk in enough hilariously disparate and campy scenes to allow for acknowledging that the performance glances briefly in the direction of current Camp-Villain King Balem Abrasax before turning its gaze.5 Musk becomes obsessed with using the symbiotes he recovers from one of his spaceships to evolve humanity, or something. It’s not a great plan, to be honest. His evil plan becomes more confusing later on when he gets a symbiote of his own.6

Venom is ultimately a strange beast to recommend. It’s often very pedestrian (its one action scene of note is really just the factory fight from The Incredible Hulk, but I liked it there and I like it here) but despite all that, its bizarre commitment to bromance, subverting toxic masculinity, and reducing a “dark, gritty” character to a goofball who likes eating people and tater tots is sort of sweet and delightful.7 If there is any doubt to the camp aspirations of the filmmakers, they pretty much go out the window by the time the mid-credits stinger plays and a vibrantly ridiculous wig is onscreen.

So why do people like Venom? I don’t really know. But I’d be okay with people liking this Venom.

Obviously, October is HORROR MONTH at Lewton Bus! Previous
Review: A STAR IS BORN Next