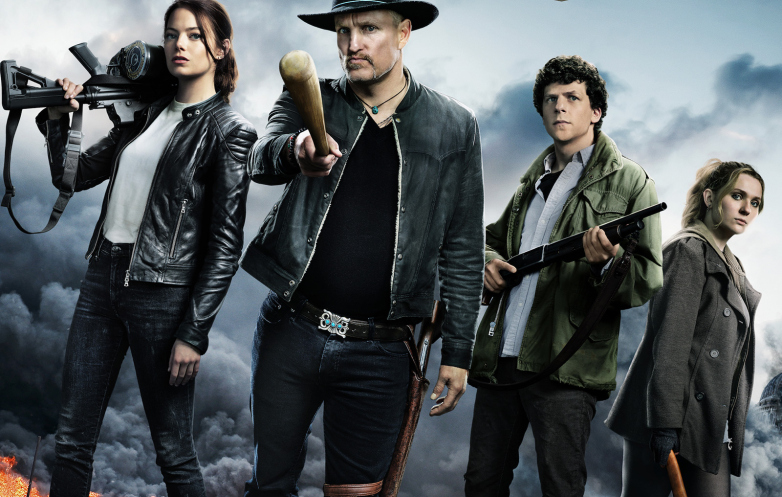 There’s a moment about midway through Zombieland: Double Tap that references Bill Murray’s accidental death (spoilers, I guess) in the first film which at first is a cute callback before quickly becoming Too Much, a fairly apt description of the movie as a whole. Actually, that’s probably a little unfair to the film as much of it walks the sequel line of “the same, but more/different” fairly well. It’s just that those bits that are too much tend to jump out at you like a brain-starved zombie, drooling blood and bile into your face.

The film picks up… immediately? 10 years? 2 months? After the first film ends. It’s hard to know exactly because while it is clear that some time has passed they are never explicit about how much time, which is generally fine, but does create a few issues I’ll get to in a moment. First I’ll need to finish the plot recap….

Right, so we pick up at some point after the end of the first film with our nomadic heroes deciding to take up residence in the now overgrown White House (no overt references to the current resident). And for awhile they are happy, but eventually the call of the road takes hold and they end up back on the blacktop, albeit not all together. With our characters split we need some new blood, which comes in the form of Zoey Deutch’s Madison, possibly the dumbest person to ever survive a zombie apocalypse (as Harrelson’s Tallahassee remarks at one point “zombies eat brains, and she ain’t got any”), and romantic rival to Stone’s Wichita.

Madison exists more as a plot device than character, and on paper she is insufferable – the type of annoying character that could easily sink a film. But Deutch, possibly the film’s MVP, imbues her with just the right amount of likability and cluelessness to keep her from grating. She is also hilarious. I think she gets the best lines, and she delivers them like a seasoned comedy pro. I’ve heard her name, but don’t think I’ve ever seen Deutch in anything before (edit: I have, in WHY HIM? And THE DISASTER ARTIST, but she obviously didn’t jump out at me in those like she does here), though I’ll be keeping my eye out for her in the future.

Heading first to Graceland, then to the hippy commune Babylon, our leads run into a few more guest stars, er, I mean, characters to remind us that there are other people out there, and at least two of them are very, um, familiar. If you’ve seen the trailers, which I assume you have, you’ll know the types of characters that Luke Wilson and Thomas Middleditch play, and you’ll also know that it is not the most original gag in the film (and there is a lot in Double Tap that is familiar). I will say that, one protracted scene aside, their bit in the movie is at least attempting to offer some character insight, while also offering a fun bit of mayhem. The last big addition to the cast is Rosario Dawson as Nebraska, who does the best with what she has, which isn’t a lot. But I’m certainly not going to complain about having Rosario Dawson in anything, much less a film where she [redacted] with a [redacted].

The short yes is that this film feels very familiar. Having just watched the first film again last week, it was easy to slip into the rhythms of the sequel. The characters felt right. The world was a little farther along the garden path (is that a saying? If not let’s pretend it is). The look and tone and music – another Metallica classic playing over the credits – were all in the ballpark. But that’s also a detriment. Yes, the characters felt familiar, but that’s because they had the exact same issues they did in the first film. They manifest in slightly different ways as happens with familiarity, but ultimately no one feels as if they have grown. Which makes the indeterminate amount of time that has passed in the world of the movie all the more perplexing.

If it’s ten years, as is suggested by the age of Little Rock (Breslin) and the state of the world, which is far more overgrown, then that means they’ve been existing in this emotional stasis for ten years, which is crazy, even in Zombieland. My hunch is that it’s far less and that they decided to be vague precisely to avoid people (like me, apparently) poking holes in the logic of the film. But even if it’s a couple of years then it’s weird that these people aren’t different at all.  But maybe there just hasn’t been a reason to grow before. I’m probably picking nits with this time x character thing, but it just felt weird to have the movie both acknowledge the passing of time while also putting the characters back in the same box as the first, now with a new hat. The good thing is that by the end of the film it feels as if the characters have truly grown, and if we get a third film – there’s just something about a trilogy, you know? (stay for the credits, kids) – then hopefully it’s with characters who have new places to go.

Speaking of new places to go, one of the most frustrating things the film does is introduce and define new zombie types, and then do practically nothing with them. In the case of one zombie type, it literally does nothing except introduce it, which is too bad because it felt like the most interesting addition to the pantheon of zombie species, not just in the film, but in the genre as a whole. Instead the main zombie-type adversary was just stronger. Unlike the rules, which have a tendency in both films to at least come back for comedic effect if not for narrative/character reasons, the new zombie types appear to mostly be here for the one gag. However, in a film that feels like there are more than a few scenes left in the rough cut, I suspect that these new zombies were possibly meant to offer more menace originally. There are a few odd edits throughout that suggest missing pieces, but considering that the film moves at a pretty good pace for it’s 97 minute I’m not going to complain too loudly. A little over an hour and a half is long enough for pretty much any zombie film, even if it’s a little rough around the edges.

I guess that was a longer no, mixed in with some yes…? I seem to have lost the thread a little there, but in the end I would say that Zombieland Double Tap is a fun return to the world and characters of the first film, and that if you liked that one you’ll almost certainly enjoy this one, I just doubt it will earn too many new fans.

1UPtown: RAIDERS OF THE LOST ARK Previous
Review: ELI Next