How a dog can bring us to common ground 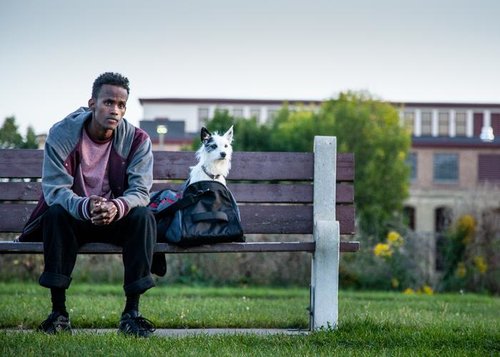 If there’s one thing I’m an absolute sucker for, it would be dogs.  No matter where I am, who I’m with, or what I’m doing, if there is a dog around I’m immediately drawn to it.  I simply cannot resist man’s best friend.  This mentality made me the perfect audience for Musa Syeed’s A Stray, a film that relies heavily in our investment in a character who cannot speak (spoiler: it’s because he’s a dog).

Barkhad Abdirahman portrays Adan, a Somalian refugee living in Minnesota.  After getting kicked out of his mother’s apartment, he begins living in his community mosque.  Soon, he is back on his feet and gets a job as delivering food for a patron’s restaurant, only to hit a stray dog on his drive to the customers.  Adan is forced to take in the dog despite his religious belief that the animal is impure.  His faith is challenged as his mosque, his friends, and his family won’t take both him and the animal in, leading to Adan spending his nights homeless with his four legged companion.

This all sounds like a bit of a downer of a film, but it’s really not.  That plot synopsis makes A Stray sound like a tear-jerker that will be relentlessly bleak, save for the finale of the film.  This film, however, blends in plenty of comedy and joy to lighten up the affair, which helps the film not overstay its welcome.  It’s a relatively short film, clocking in at a mere 82 minutes, and it is bursting at the seams with energy.  While this brief runtime leaves some of the film’s threads unresolved (the subplot involving Adan being an FBI informant doesn’t really go anywhere), however, it’s a minor complaint when the meat of the film benefits so much from its lean structure.

Abdirahman is unbelievable in his first leading role, portraying Adan with charm, charisma, and plenty of warmth and humor.  The film entirely is on the shoulders of its leading man, and he nails every aspect of the role.  Moments of anger, confusion, exasperation, as well as happiness, joy, and triumph come and go from scene to scene, and Abdirahman’s performance helps the film maintain its tonal balance throughout.

It would be improper to not note how impressive the canine performer (and its handlers) is in A Stray.  Many of the film’s emotional beats rely on a deep connection with both Adan and the dog, and I can’t think of a single moment that doesn’t fully land.  Spending much of the film inside a box, gym bag, or wrapped in a blanket, she makes the most out of every second she’s on screen, charming the audience with her photogenic smile–it’s easily one of the best animal performances of 2016.

It’s easy to brush A Stray aside as a film that is unrelatable to most audiences, but to do so would be misguided.  I’m a white, middle-class, U.S. born Christian, so to say I know anything about the experience of a Muslim refugee would be absolute nonsense.  That said, I connected with Adan’s journey on a deeply personal level, as will most of its audience.  Dealing with a crisis of faith, questioning if you’re doing the right thing, and abandonment are all universal struggles that anyone can connect with.

A Stray is not a perfect film—the numerous loose ends leave the film feeling incomplete when the screen fades to black.  It is, however, both a wonderful story as well as a profound work of art that deserves to be seen by as wide an audience as possible.  It brings to heart the current political discourse in our country regarding refugees and it gives me hope that maybe, just maybe, this film, or one like it, can change the hearts and minds of millions.

MASS EFFECT and the Value of Empty Space Previous
The Essence of Camp Episode 39: HELLRAISER Next