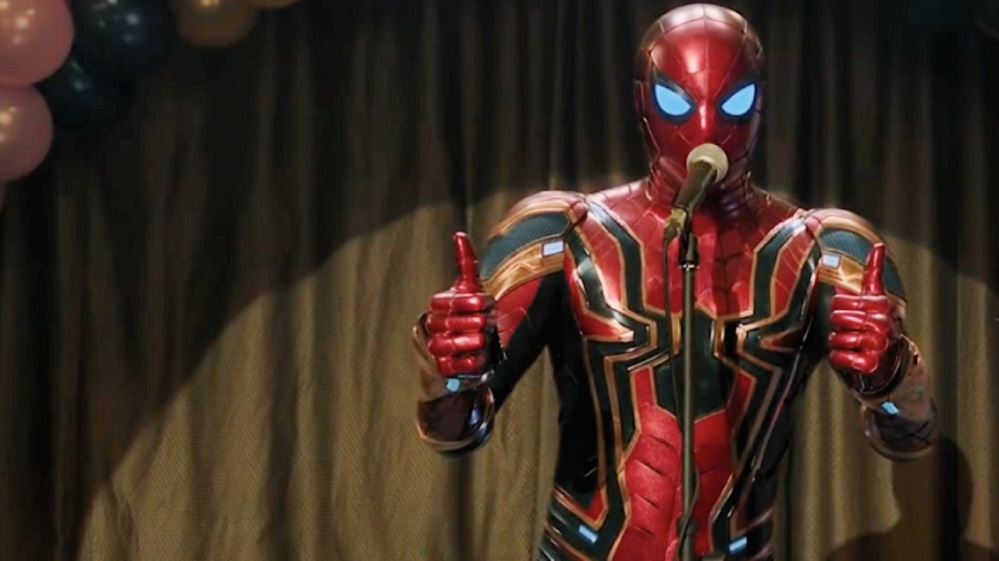 I didn’t grow up reading comics. When Sam Raimi’s Spider-Man came out I was, to the amusement of my friends, baffled that the titular “man” was actually a teenage boy. I enjoyed the Raimi films mostly as a Raimi fan,1 but I never quite understood the appeal of the character himself. Then Peter Parker entered the Marvel Cinematic Universe with 2017’s Spider-Man: Homecoming, and I finally got it. He really was “your friendly neighborhood Spider-Man!” A very young, small-fry of a superhero, thrust into a broader universe filled with billionaire geniuses, cosmic existential threats and, hell, literal gods. It’s a wonderful and relatable situation, being an everyday person2 confronted with a reality that is often confusing, scary and beyond your control. I’m glad I finally caught on to it. Spider-Man: Far From Home, the follow up to that film and Avengers: Endgame, continues with the concept and fleshes it out. It’s also an utterly charming blast of a film.

Far From Home picks up in the direct aftermath of the MCU-shattering finale of Endgame. The “dusting” of half of the universe’s population and their subsequent resurrection, now collectively referred to as “the Blip,” plays a role in the film, but it’s just touched upon. The Blip’s influence plays out mostly on a high school scale. Resurrected kids being pissed that they have to start their senior year again. The dorky little kid who became a dreamboat during the intervening years. That sort of thing.

In keeping with the smaller, more personal scale, what looms over the film isn’t the Blip but the death of Tony Stark. The image of Iron Man shows up again and again, from murals to TV broadcasts to ad hoc shrines in the streets of Venice, but more than that the film centers on the effect that the passing of a friend and father figure has had on Peter Parker (Tom Holland). Peter is cut adrift, reeling from the loss of his mentor and trying to figure out his role in a post-Tony and possibly post-Avengers world. Peter is worn down by the world-saving business. He doesn’t want to be the “next Iron Man,” he wants to be a teenager. He wants to make his feelings known to his crush, MJ (Zendaya). He wants to go on a vacation.

It’s the latter that puts the “Far From Home” in the title, and kicks the movie off, as Peter and his classmates go on an enviable trip overseas. What Peter doesn’t realize is that he’s about to get enlisted in another world-saving adventure by the one-and-only Nick Fury (Samuel L. Jackson). A crew of Elementals, monstrous manifestations of Earth, Wind, Fire and Water, have somehow broken through from a parallel universe with the aim of seeing the sights of Europe and then destroying them.

Luckily for humanity, they have been followed by the superpowered Quentin Beck, aka Mysterio (Jake Gyllenhaal), who is hellbent on saving the Earth and avenging his parallel Earth that the Elementals destroyed.

All of this globetrotting and interdimensional chaos doesn’t dilute what the film is at its core, which is Peter Parker finding his place in the world. He’s trying to balance navigating his teenage priorities and anxieties and being whatever passes as normal in the MCU, with the (still unspoken) mantra of “With great power comes great responsibility.”

Homecoming wisely avoided the traditional superhero origin story. We’ve seen Uncle Ben die nearly as many times as we’ve seen Bruce Wayne’s parents die.3 Instead it threw us in media res, with Peter already Spider-Man, even if only on the “friendly neighborhood” level. Far From Home oddly feels more like an origin story than its predecessor. It finds Peter coming more into his own; discovering what his strengths are, in the face of interdimensional threats or otherwise, without the safety net of a crew of ridiculously strong and more experienced heroes.

And the movie as a whole? A metric ton of fun. The writing is hilarious. The characters are a joy to hang out with, whether we’re laughing with them or at them. Tom Holland is, yet again, perfect for the role. Zendaya is great as MJ, playing the snarky, morbid and politically aware badass that I totally would have had a crush on in high school. Pete’s got good taste. Gyllenhaal is wonderful. He plays heroic and charming and supportive without ever feeling smarmy or condescending. A potential surrogate-Tony, minus the smartass oneliners, who you would actually like to grab a beer with and spill your guts to.

My only real criticism of the movie is something that the MCU films (and modern blockbusters in general) have sometimes been accused of. The climax, for all of its emotional import, feels pre-vized to next week and back. It’s chaotic, shot with a “camera of god” that is capable of impossible things, and it often takes the weight out of the action. But that’s me nitpicking. If nothing else, that’s made up for by some visually creative hallucinatory sequences that portray Peter’s anxieties and general development, both as a person and a superpowered hero, in an efficient and spectacular fashion. People tend to complain about movies “having too much CG these days,” but there are certain things that can only be portrayed with the assistance of talented people with computers, and this movie is proof of that.

Spider-Man: Far From Home isn’t a top tier Marvel film for me but, as a Marvel fan, that means I think it’s really damn good. It builds well off of Marvel’s last decade and change of cinematic storytelling, helping to set the stage for the next phase of the MCU, while still remaining personal and heartfelt. I love this incarnation of Peter Parker. I want him and his family and friends to do well and grow. I also want them to have to deal with reality-splintering bonkersness. It’s fun to join them on the ride.

Why People Don’t See Films Like BOOKSMART in Theatres Previous
Forks and Spoons be Damned! KNIVES OUT! Next