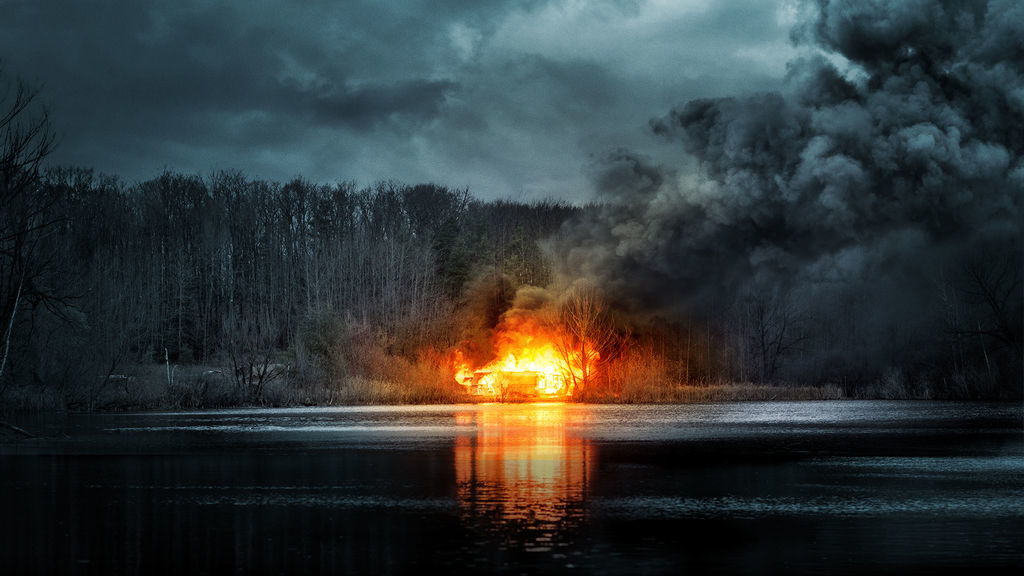 Stream of Consciousness is semi-regular series that highlights underseen gems that are available to watch now from online streaming services. Kevin recommends 2017’s Shimmer Lake, streaming now in the US from Netflix.

Shimmer Lake might be the most mid-to-late-90s film ever made.  We’re talking a gritty crime thriller using a non-linear narrative that’s full of twists and turns.  It’s kind of endearing how late 90’s it is, to the point where I couldn’t help but thoroughly enjoy it’s embrace of pulp and complete lack of pretension.  Oren Uziel has crafted a quick and entertaining, if slight and sloppy, directorial debut that’s worth giving a shot.

After recovering a duffel bag full of cash in the aftermath of a bank robbery, Andy Sikes is gunned down by his getaway driver who is supposed to help him flee to Mexico near the titular lake.  Taking notes from films like Christopher Nolan’s Memento and pretty much every Tarantino film, Shimmer Lake takes place over four days in reverse chronological order (Friday, then Thursday, then Wednesday, then Tuesday).  We see each day’s events unfold through the eyes of Andy and his brother Zeke, the local sheriff.  It’s a choice that introduces new layers to the mystery surrounding the bank heist that leaves three people dead and shows the latter day characters’ decisions in a new light.

Director Oren Uziel, in his feature film debut, shows signs of incredible talent here, weaving a mystery that feels like a throwback to the twisty, neo-noir era of the late 90’s.  Unlike most new filmmakers of his generation, his camerawork is subdued; often cinematographer Jarin Blaschke lets the camera remain static and distinctly framed rather than forcing acrobatic tracking shots into every scene.  Uziel lets his screenplay and editing do most of the heavy lifting, instead focusing on building a haunting and grimy atmosphere.

Featuring a cast primarily made up of comedic character actors, Shimmer Lake’s biggest issue falls with it’s acting.  Rainn Wilson stands head and shoulders above the rest as Andy, showing menace and melancholy in what might be the best work of his career.  Similarly, Ron Livingston and Rob Corddry are fun as the comic relief “B-team to the D-team” FBI agents assigned to the case due to the bank’s FDIC coverage, and the offbeat comedic chemistry between the pairing is off the charts.

Sadly, that’s about where the positives on the acting end, as most of the cast is either supremely miscast or so bland that they hardly even register.  Benjamin Walker as Zeke is a missed opportunity, as I can see how interesting Zeke is as a character on paper but Walker just doesn’t put together a magnetic enough performance to be the film’s central character.  Adam Pally’s sheriff’s deputy tries to work a balancing act between serious devoted partner and comic relief sidekick and the performance just doesn’t work — though there is a great running gag involving him being forced to sit in the back of the police cruiser every day.  And outside of Rainn Wilson, none of the three other criminals manage to be anything but stereotypes or overplayed tropes (there’s sadly a really terrible “secret gay politician” subplot here, but it also accounts for an A+ poop gag so I’ll go ahead and upgrade it to a D+).

Overall, I think Shimmer Lake is a perfectly competent film and a solid debut for writer/director Oren Uziel.  The central mystery works as does the non-linear timeline and I’ll be interested to see what Uziel can manage with a larger budget and more experience with tone control.  One of my biggest pet peeves with mystery films like Shimmer Lake is that the film tries to make you feel stupid through unnecessary or unprovoked plot twists, but I’m pleased that, while (spoilers) there is a plot twist, the film does a great job of providing enough bread crumbs throughout that it shocks, but doesn’t slap you in the face with how “brilliant” it is.

2017 Emmy Awards Recap Previous
Does It Look Like It's Our First Time? SKYFALL Next