My favorite love story ever written 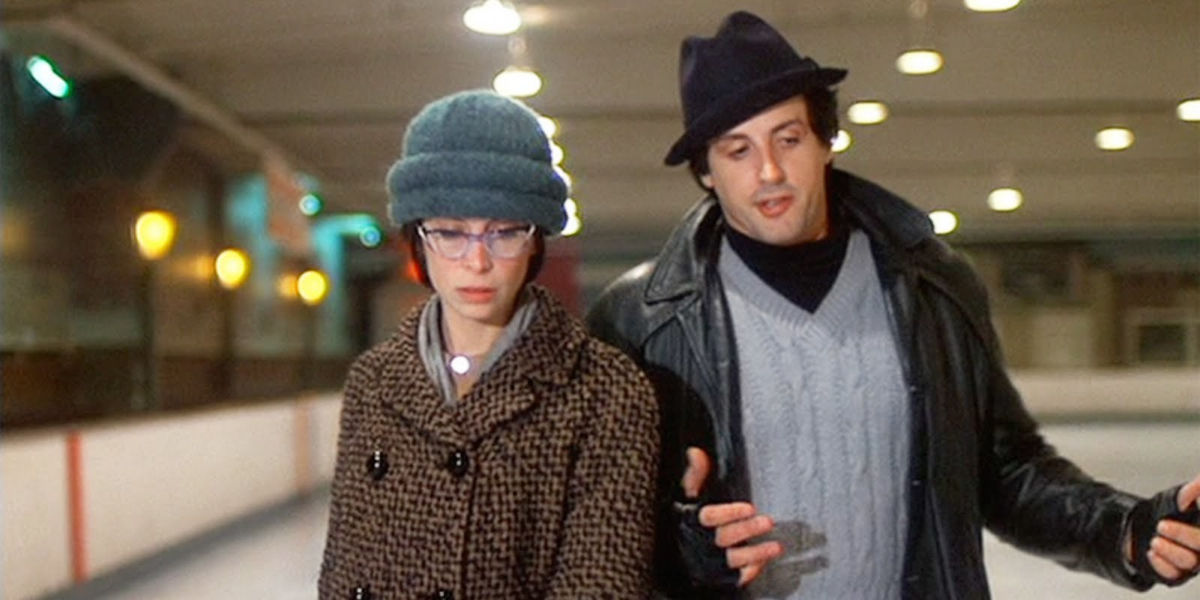 This month marks the 40th anniversary of one of America’s truly great films, Rocky.  In celebration of this (as well as the film’s release on Amazon Prime), we’ll be exploring the entirety of the Rocky series, and what makes this goofy boxer from Philadelphia one of the legendary characters in all of cinema.

I want to love my wife every day with the passion that Rocky loves Adrian at the end of this movie.  Rocky’s exasperated cries for his future wife in the midst of the greatest achievement of his life is one of the most emotionally powerful scenes I’ve ever witnessed.  It’s a moment that turns me into a blubbering baby without fail*.  It’s an incredibly powerful scene that adds the proverbial cherry on top of what is a wonderfully simple film about wounded, broken, gap-filled people finding love.

Sylvester Stallone, who made his bones as an action star and occasionally great actor, wrote one of the greatest screenplays of all time for this film.  It’s so full of tenderness and compassion for its characters that it’s a shame that Stallone never wrote another screenplay of this caliber. The film features no villain, and even what could be construed as antagonists are written with a deft touch and are never treated as irredeemable monsters.  Apollo Creed is shown to be a smart businessman and a fierce competitor, despite his arrogance and brashness. Throwaway roles like Gazzo, Rocky’s loan shark employer, are given pure motivations; there are no attempts to convince Rocky to throw the fight, but instead genuine encouragement and support.  Even Paulie, who at his most monstrous is terrifying and despicable, is shown to be deeply wounded and jealous because of his lot in life.

Speaking of characters, Rocky Balboa is one of the most unique and special characters written for the silver screen.  In a landscape that features the heroism of Luke Skywalker and the daring of Indiana Jones, Rocky is quaintly passive in his own narrative.  Outside of his courtship of Adrian, Rocky does next to nothing to bring about his character’s success.  Rocky does nothing to earn his championship bout, lets Paulie earn money advertising on his robe, and only brings Mickey on as his manager after Mickey pleads with him to do so.  It only serves to underpin the fact that the story isn’t really about the fight, but about Rocky’s growth as a man and his love for Adrian.  He’s a human labrador who yearns more for human contact and love rather than success in the ring.

Adrian is another individual unlike any other, and we rarely see such raw vulnerability and social awkwardness on screen.  Adrian is impenetrably shy, and constantly shoots down Rocky’s advances.  She clearly likes Rocky, never outright rejecting his flirtations, but is so painfully introverted that she is unable to let him in.  finally eking out of her shell after a thanksgiving day date, Adrian slowly becomes more comfortable expressing both her individuality by standing up to her abusive brother, as well as romantically, moving in with Rocky and eventually proudly telling him “I love you.”

But for all the great character work that Stallone’s script brings us, there is one key detail that his script, along with John G. Avildsen’s direction, that turns what could have been a great film into an all-timer.  After witnessing Rocky go the distance against Creed, the world’s greatest fighter, the film ends on a split decision at the judges table.  To drive home that the fight is merely a plot device rather than the focus of the story, and that the true plot is Rocky and Adrian’s burgeoning relationship, our attention is focused on Rocky and Adrian’s attempt to find each other after the fight.  Little attention is paid to the judge’s votes, nor does Rocky even care how the fight ends.  His only desire is to find Adrian and tell her his affection for her.  The fact that he’s just spent the last few hours getting his face pummeled, nose broken, and eye bludgeoned yet still notices that Adrian lost her hat, is such a small line of dialogue that communicates a deep understanding of the moment in both these peoples’ lives.

I was too young to fully grasp how special Rocky is when I first had the chance to see it.  As a teenager, I was drawn more to the cartoonish and motivation-driven sequels than the original film.  As I grew older and began to truly understand the depths of love and the importance of relationships, Rocky began resonating profoundly in both my heart and mind.  It’s rare for a year to pass where I don’t sit down and watch Rocky for the Nth time, and maybe more than any film it has changed my life in a profound way.

*I’m tearing up just thinking about it

Rocky is available to stream on Amazon Prime.  Next we’ll continue celebrating the 40th anniversary of Rocky with the second and third installments in the series, Rocky II and Rocky III.

PILLARS OF ETERNITY and Player Motivation Previous
The Essence of Camp 40: MYSTICS IN BALI Next