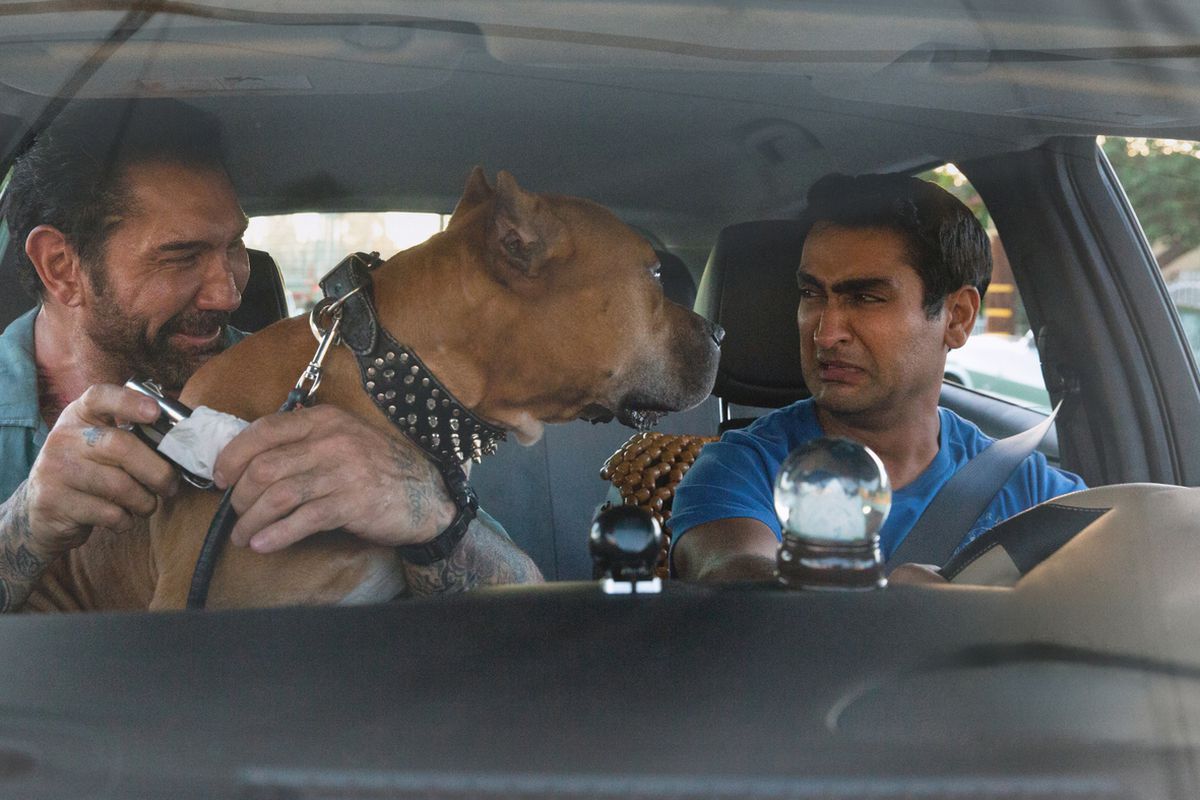 Stuber is a movie that looks great on paper; it’s my kind of movie. Kumail Nanjiani plays Stu, an Uber driver who unwittingly gets taken for the worst night of his life when Vic (Dave Bautista) gets into his car. Vic is a cop who can’t see because he’s recovering from laser eye surgery, but gets a hot tip that a notorious drug smuggler is making a big sale and he knows it’s his only chance to bust the guy before he disappears again.

It’s a pretty classic buddy comedy formula. Unfortunately, when you’re making a buddy cop movie and you use every trope in the book, you have to compensate with serious laughs and Stuber just isn’t very funny.

Don’t get me wrong, Nanjiani and Bautista are very funny people and do their best, but the script reduces their roles to traits and so the jokes are mostly a reflection of a set of cardboard characteristics and less something that is ascribed to real people. Bautista is mostly used for his size here and as Vic Manning, his grumpy gruffness comes from his masculinity and the stereotype of how gigantic, muscled men should behave. His strained relationship with his daughter is barely explained or properly conveyed, only that he lets work get in the way of connecting with her on a personal level. In this movie, that is ultimately more of an issue than say, the fact that he’s a scary, violent man. People die in this movie, often violently, and while I don’t think comedies are necessarily the place to go to critically examine the state of police violence in our country, the movie also doesn’t seek to at least doubt its effectiveness for long. It can’t, because Vic needs to get his man. When it does attempt to address it, it’s with Nanjiani’s Stu offering an alternative to violence. In this scene, he threatens to send a series of embarrassing tweets on a goon’s behalf. The problem with this sequence of jokes is that the threat of embarrassment relies on assumptions about a man being insecure in his masculinity and affirms those assumptions because the plot requires Stu’s plan to work.

The movie does a slightly better job when it comes to Nanjiani, but falls short when he is mostly portrayed as a sad sack working two jobs and who believes he should invest all of his money in a women’s only spin gym because he has a crush on his friend Becca, played by Betty Gilpin. He’s aimless, basically just going wherever his Uber passengers want him to go and he’s struggling for that 5-star review. In a better movie, I could see how this would be a clever commentary on the constant grind in a gig economy, but in Stuber it comes off completely as a gimmick and as strange product placement that could become outdated sooner rather than later. It comes off as even weirder when you consider that a good portion of the movie, because it’s centrally about the Uber ride from hell, is spent explaining how Uber works and then how electric cars work.

Another reason why the humor just falls flat is because much of it has very little setup. When Stu remarks that he isn’t going to take guff from a white man, Vic interrupts and clarifies that he isn’t white. Then the joke becomes, well what is he then? Stu rattles off a bunch of ethnicities, genuinely clueless about Vic’s ethnicity, then ends with a throwaway line about how he’s a grab bag of ethnicities. Why was this even in the movie? What does it serve? Did Stu really think Vic was white? I know race is a construct but how we perceive someone’s race is still such a big part of our society and how we treat each other and it just didn’t ring true that Stu wouldn’t know and that the audience wouldn’t either.

The supporting cast gets very little to do, which is such a shame. Iko Uwais, a treasure on all seven continents, plays the main villain, Oka Teijo. Watching him fight in The Raid was a delight, but unfortunately he doesn’t really get to do a lot of it here, and when he does the editing is choppy, and it looks like Michael Dowse, the director, tried to mimic Paul Greengrass but only adopted shaky cam as a technique and not as a tone-setting device. When Greengrass used it in The Bourne Supremacy and The Bourne Ultimatum, two of the best spy action thrillers to come out in the last 20 years, the shaky cam effect never obscured the geography or clarity of a fight. You could still see and understand what the characters were doing and where they were relative to things around them. In fact, the shaky cam effect was used pretty sparingly. It just stands out because it sets such a visceral tone. Stuber lacks that intention.

Natalie Morales, who plays Vic’s daughter Nicole, is called upon to simply be exasperated in every scene. Gilpin, as the aforementioned Becca, is funny but also portrayed as a woman who “dates assholes” as Stu says and has put Stu firmly into the friendzone despite a one-night hookup a while back. It’s actually this subplot that left me the coldest because the movie isn’t explicit until the third act that Stu realizes he is completely wrong about his approach to personal relationships, and that he lacked the fortitude to make decisions. Up until that point, Stu is supposed to be the hero who needs to get the girl and we are supposed to be sympathetic.

Stuber left me extremely cold because it feels like it’s only a third of a movie and the other parts were left on the chopping board, an issue that is all the more infuriating because it is the simplest of plots and uses all of the typical tropes of buddy cop movies: opposites are put together under zany circumstances, bickering, a dirty cop, etc. etc. Anyone who has watched a dozen buddy cop movies gets the gist and so there’s really no excuse for getting it wrong.

I laughed a little during this movie. Not a lot, certainly there were some mild chuckles involved and perhaps one or two guffaws. But I genuinely struggle to remember what parts were actually funny. At best, I was amused and at worst, I was bored and even though the film clocks in at a little over 1 hour and 30 minutes, it never takes advantage of its short runtime to be paced properly nor does it spend that time wisely by building up its characters. It wastes Uwais and even though Bautista and Nanjiani have great chemistry, there’s a strange and almost regressive lesson in Stuber. Yes, Vic learns to express his emotions better and Stu learns to take charge and make decisions. But there was no real reason why either of these characters needed each other to do that and it’s a shame because these actors are very good and I liked seeing them on screen.

Review: THE LION KING Previous
The First Trailer for A BEAUTIFUL DAY IN THE NEIGHBORHOOD... Next