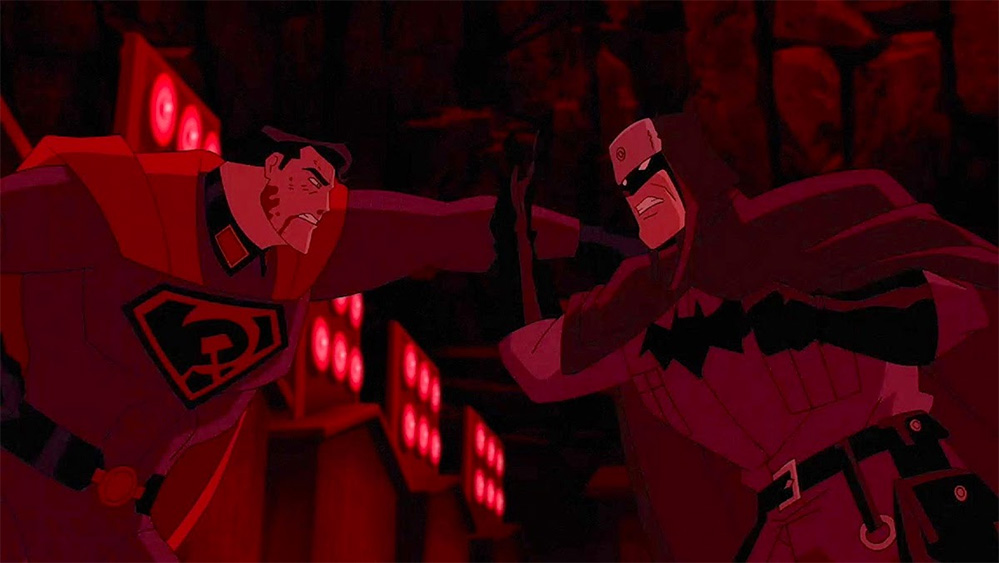 Elseworld stories are opportunities to play with well known characters in ways that are too outrageous for their canonic portrayals. In the case of Superman: Red Son, asking “what if Superman landed in the Soviet Union instead of the United States?” makes sense considering that the Man of Steel is an avatar for all the ideals America is supposed to represent. Landing in a fundamentally different country would alter his character in significant ways. Unfortunately, this adaptation of the graphic novel by Mark Millar, Dave Johnson and Killian Plunkett is yet another addition to the streak of subpar animated films based on DC comics.

The biggest problem with Superman: Red Son is its lack of narrative focus and momentum. The film has several plot lines crammed in an 84 minute runtime, never giving them any time to breathe or coherent development. It’s structured in such a way that it seems like a series of shorts with barely any connective tissue. The screenplay is under the impression that throwing hot button phrases like “America First” and “Not All Men” counts as thematic weight. In the end, those gestures are nothing but juvenile lip service. I’ve read comments saying that the film is anti-communist propaganda and too jingoistic, but in my opinion, that is giving it more credit than it deserves, because it really isn’t about anything. It doesn’t have the conviction to stand by any statement, nor the intelligence to do anything interesting with it.

The hollow writing is also reflected in the characters, whose motivations are never elaborated beyond a few lines of exposition. Superman’s arc is, in theory, about realizing the flaws in the system he grew up defending and changing his ways for the better; but it is never clear how he gets from point A to point B in terms of growth. For instance, he’s outraged by the abuses at Iosif Stalin’s gulags, but he proceeds to enslave Soviet people with mind control devices that are just as cruel; only to discover that… imposing your will on people is bad.

We also have Batman reimagined as a terrorist with resentments towards Superman, which is odd considering that the character we see here has nothing to do with Batman aside from the costume. It comes off as unnecessary fan service, especially since this version of the Dark Knight is just a one-dimensional mustache twirling villain. Wonder Woman is a rather passive presence and does nothing to move the plot forward. Lex Luthor is the secondary character that gets the most time in the spotlight, but it’s a predictable and generic portrayal with a miscast Diedrich Bader at the helm, lacking the imposing arrogance associated with the genius billionaire turned President.

Not surprisingly, Superman: Red Son suffers from the same problems DC animated films have been going through for the last six years. More specifically, the animation freezes so frequently to the point of being distracting. It’s clunky and it deprives the film from any energy or personality. The aesthetic designs lack detail and get boring to look at after a while. The voice performances hit only one emotional note regardless of the moment that’s happening on screen, failing to add any nuances to the characters.

I hoped that taking a break from the traditional canon in these consistently disappointing films would result in something that could be fresh, at the very least. But from the looks of it, if we want quality DC animation these days, Young Justice continues to be the only place to go.

J. Horton On: How Filmmakers Make Money on Amazon Prime Previous
Commercial Breaking Point: Media Convergence and the... Next