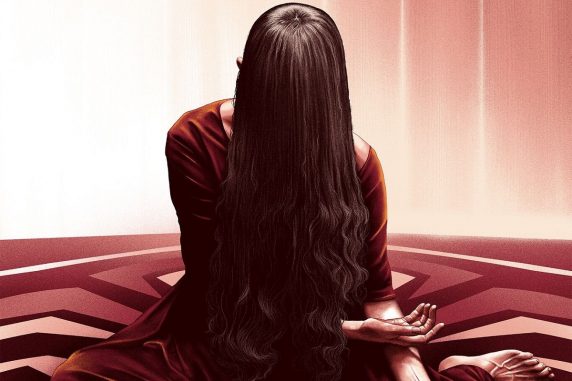 Love it or hate it, few can deny that Dario Argento’s 1977 surrealistic horror classic Suspiria is iconic, and deservedly so. There’s pretty much no other movie that quite matches its opulent hyper-colorful stylistic sensibility. Not even Argento’s other films and similar Italo-trash auteurs like Mario Bava can quite match it, and few other films quite achieve the dreamy haze of a true nightmare in such a way. Sure, it’s mostly all style strung together by the barest plot, the dubbing is hilariously bad — you know, because it was a low budget 70s Italo-schlock — and there’s no real coherent theme to be found beyond “witches be cray”, but who cares! The visuals are incredible, the kills and buildup to them are nearly unparalleled and Goblin’s prog rock score is one of the best soundtracks of all time. So, naturally, remaking this movie simultaneously became both a fool’s errand and a surprisingly interesting prospect, as there’s basically no way to replicate what made the original great in its specificity, so it’d have to strike out in its own direction.

You’re not gonna top a shot like this stylistically. Don’t even try. You will fail.

After a few attempts (including one by Halloween director David Gordon Green) failed to get off the ground, enter Luca Guadagnino, aka the last filmmaker you’d expect to take on this sort of film, going by his previous output. His last three films, I Am Love, A Bigger Splash and Call Me By Your Name, are about as far removed from the scrappy genre sensibility of Argento as possible. All of his movies thus far are warm, almost drunkenly exuberant explorations of desire, usually involving rich white people in the backdrop of the Italian countryside. Not exactly the sort of person you’d peg to remake a horror classic.

And Suspiria is exactly why you shouldn’t judge a book by its cover, because not only does Guadagnino reveal here that he does have a freaky genre side that’s he’s been itching to get out, but he also strives to make Suspiria completely and totally his own, rather than simply paying homage to a classic. All that really remains is the most absolute basic outline of the central premise — which, for the record, is “new girl starts at a prestigious dance academy in Germany, only for dark occurrences to begin shortly after her arrival that lead her to realize that something very evil is going on within the walls”. Gone is the vibrant multicolored palette of a secluded opulent dance academy, replaced by a wintry, muted color scheme that pulls you into the blisteringly cold atmosphere of 1977 Berlin, with a dance academy of dark corridors and Brutalist architecture. Gone is the 98-minute style exercise, replaced by a 150-minute runtime divided into six acts and an epilogue, from a screenplay that weaves in multiple different thematic threads and parallel plotlines.1 Gone is the Goblin prog rock score, replaced by Thom Yorke’s seemingly counterintuitive-but-shockingly effective eclectic mixture of Blade Runner style electronica, Krautrock influenced songs, piano waltzes and dark ambience.2

Pictured: the cinematic chill of winter (and also Lutz Ebersdorf, who is totally a real person).

And the end result is… pretty awesome? It’s not an easy film, and it’s a lot to swallow after one viewing, but Suspiria really does succeed on its own merits, and has its own concerns and aesthetic. It’s a film that’s almost inevitably bound to be divisive, as it’s a period piece set in 1977 Berlin, and its thematics include touching on numerous subjects relevant to post-WWII Germany, including the Berlin Wall, the Holocaust, the Lufthansa hijacking and the Baader-Meinhof Gang. There will no doubt be much to debate as to how well it integrates those themes onto the skeleton of the original film’s premise. Personally, I thought it worked, as those examples among others mostly serve in-film as a shorthand for the evils that form the backdrop of the film’s real central themes, which are basically a spin on the ground Robert Eggers covered in The Witch (fundamentalism-as-suppressor) only transposed onto the darker corners of 20th century history instead of Puritan New England, as well as zeroing in on female agency, drawing from both the original Suspiria as well as the broader mythology established in Argento’s pseudo-sequels related to the Three Mothers (Inferno and The Mother of Tears). Which builds to a scenario where the witch coven 3 at the heart of the thing is basically a dark mirror to the very real evil that men have wreaked upon the world. It’s no coincidence that the only significant male character in the movie — who serves as the avatar of regret for the failings of his generation — is played by a certain actress under heavy prosthetics. All the actual male-performed roles in the movie are portrayed essentially as buffoons.

Let Mother(s) take care of you.

As noted earlier, the film is very upfront about the presence of the witch coven, and thus sets up a fairly artsy slow burn over the course of its runtime, sprinkling bursts of violence and evocatively creepy imagery along the way. Guadagnino isn’t so much interested in scaring the audience in the traditional “horror movie” way so much as he’s interested in building a chilly, slowly mounting sense of unease, both through wonderfully old school visual effects and his and DP Sayombhu Mukdeeprom’s incredibly offbeat sense of camera placement. For the majority of its runtime Suspiria goes along like this… until the exact moment where it bursts into something else entirely. I won’t spoil what it is, but suffice it to say that I never would’ve guessed Guadagnino would’ve gone anywhere near it, and it’s completely reshaped my view of him as a filmmaker. I did not know that exuberant, drunken king of Rich Disaffected Italian Cinema had this much of a freak flag in him, and I’m truly in awe.

This shot is so right on the line between amazing and terrible, and dances on it and makes it look easy.

The cast is generally stellar. Dakota Johnson finally gets a role worthy of her underrated talents as this new take on Susie Bannion, Tilda Swinton oscillates between classic severe regal Swinton as Madame Blanc and… other stuff in her other roles (yes, this is a film where Tilda Swinton plays multiple roles), and the supporting actresses all acquit themselves well, especially Chloe Grace Moretz in a brief cameo. Even the one real paean to fan service, original Suspiria star Jessica Harper showing up in a small but pivotal role, works really well in context.

It’s hard to fully describe Suspiria in a spoiler-free review, but suffice it to say that Guadagnino’s radically reimagined take on a classic is not only a great film in its own right (worthy of being mentioned in the same breath as other horror remake classics such as The Thing, The Fly and Invasion of the Body Snatchers) but also a genuinely insane work of madness that demands to be seen. Not everyone will like it, and I imagine many will outright hate it, but blow past the sometimes-convoluted screenplay and the fairly questionable deep dive into real historical talking points of postwar Germany and you’ll find an enthralling, unnerving, sometimes nasty but always challenging one-of-a-kind horror film that rewards patience. I imagine the film will only get better on repeat viewings, and I honestly can’t wait to revisit it. I tip my hat to Luca Guadagnino, and I’m very excited to see where the guy who had the balls to follow up the lovely Oscar romance Call Me By Your Name with something as bananas as this goes from here. Give your soul to the dance. Let Mother take care of you. All is well, as long as we keep spinning.