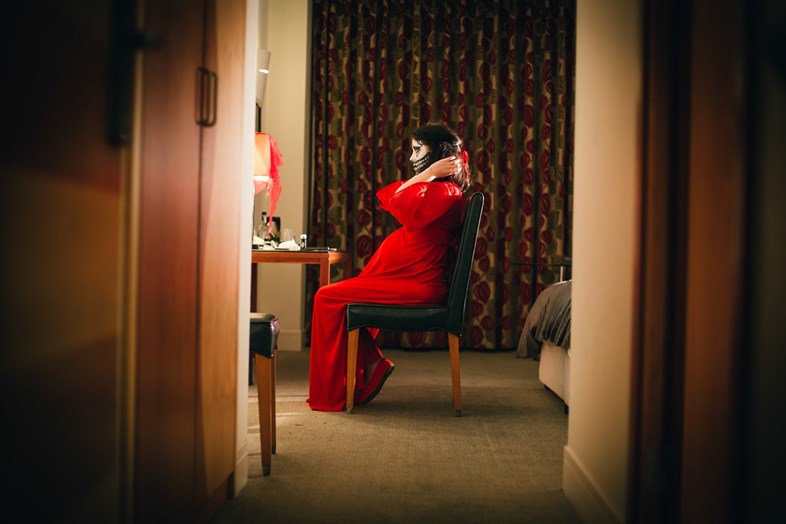 Hellish pregnancies are once again lighting up the imaginations of horror directors. Rosemary’s Baby is of course the popular archetype, an enduring barnstormer of idiosyncratic comedy, misogynist gas-lighting, and body horror. The five-ish decades since have kept the fear alive in many films but never, until recently, with the energy and originality of that landmark, or with a character as memorable as Mia Farrow’s put-upon New Yorker. The spectacular explosion of high-end independent horror during the past several years has elevated the full spectrum of sub-genres, and the long-standing concern with women’s survival has again turned its attention to motherhood. The past two years alone have given us Shelley, The Ones Below, and Antibirth – all of which portray pregnant women who suffer terrible threats both internal and external, and all with intelligence and ingenuity. Of these films, Prevenge stands out because, for all of its reliance on established beats, it feels the most personal.

Alice Lowe directs and stars as deranged mother Ruth, and her ever-presence gives the film a unity of personality and tone; it plays as an intimate extension of an individual creator. She sets the tenor as director, and wholly embodies it as the lead. The story is fun if familiar; a very pregnant Welsh woman fancies herself possessed by a chatty fetus that psychically commands her to avenge her partner’s death. She carries out her prescient tot’s orders with blunt matter-of-factness, unquestioningly slicing throats and gouging guts, enjoying psychopathy enough to quip at her victims as they gurgle on blood. Her viciousness is wittily countered by her deadpan unflappability; there is a wonderful, uneasy humor to all of the violence here, thanks to Lowe’s bemused consideration of her horrors. Furthermore, her victims are frequently ridiculous (a particular dude called DJ Dan is a real keeper) and she brilliantly plays the “straight man” (we really, really need to refresh this term).

For all of the silliness, there is a lot of sadness here. Not necessarily in the trite backstory; vengeance of a beloved’s death is common stuff in all corners of the genre. It’s in her abandonment to horror, playing out grief and anger with literal blood and guts, powerless to hold up the inevitability of it all. She is swept up by an awful destiny of her own making, and is resigned to carrying it out. Her fate has an actual voice, the very funny yet very scary detuned kill orders of the fetus itself – they play like demented thought bubbles every time she hesitates to drive a knife home. But again, for all of the film’s comedy, its her powerlessness that is ultimately the film’s emotional core, and it is genuinely upsetting at times.

I think this unforgiving emotional core is part of what makes the best of the new horror wave so compelling. The other films I mentioned share this, even if they aren’t quite as deft as Prevenge at delivering their protagonists’ suffering. They all portray pregnancy as a distressing deconstruction of character, an abandonment of stability, a surrender to dark forces. This idea is engrained in many stories of parenthood, fictional but of course anecdotal as well; there are few parents who will tell you that they don’t regret losing some part of themselves once their children took breath. These films do as horror films have always done best: retelling our actual fears and experiences through monstrous metaphor.

The film’s craft struck me. Its cinematography is a bit haphazard, mostly carried out with unsteady hand-held and seemingly improvised shots (“seemingly” does not mean “actually” – films that appear to have been composed in the moment are often rigorously planned). Its color-timing is inconsistent to the point of being distracting. It’s frankly an ugly film. Although I didn’t enjoy looking at it, I do think its style helps heighten the sense of intimacy. Formal composition would distance us from Ruth when the film needs us to feel as though we are inside her head (in more ways than one). It works.

Finally, as an electronic musician myself, I have to talk about the score. Toydrum provides a stunning kaleidoscope of electronic ambience and rhythms, but quite far from the now cliched (again) bombastic arpeggios of Stranger Things (don’t get me wrong, like everyone on Earth I like the score to Stranger Things). It is relentlessly melodic, but it leaves aside the almost hummable hooks from many of the new wave of electronic horror scores by drenching its harmonies in reverbs and other dense effects; these are distancing techniques that create a feeling of untouchable grief. As intimate as the film otherwise feels, the music portrays emotion that Ruth can never overcome. It’s an exhilarating effect. To my own amusement, I spent much of the film convinced that the score was actually the work of long-time Warp Records fave Clark, who recently contributed a stunning score for the epic televised crime thriller The Last Panthers. I am very happy to discover a new (to me) artist whose work is so relentlessly beautiful.

Prevenge is my favorite of the current crop of horror films about new motherhood. There are many accounts of women whose depression and illness during this experience severely up-end their lives; Prevenge transforms these into a familiar killer-inside-me metaphor that serves to tell a relatable tale of mourning. Metaphorical access to human experience is the ultimate mission of successful horror, and Prevenge delivers.

Things We're Digging This Week - Week of 3/6/17 Previous
Does It Look Like It’s Our First Time? Revisiting FROM... Next