Does It Look Like It’s Our First Time? THE MAN WITH THE GOLDEN GUN

This movie is as dumb as a butt. And I liked it! 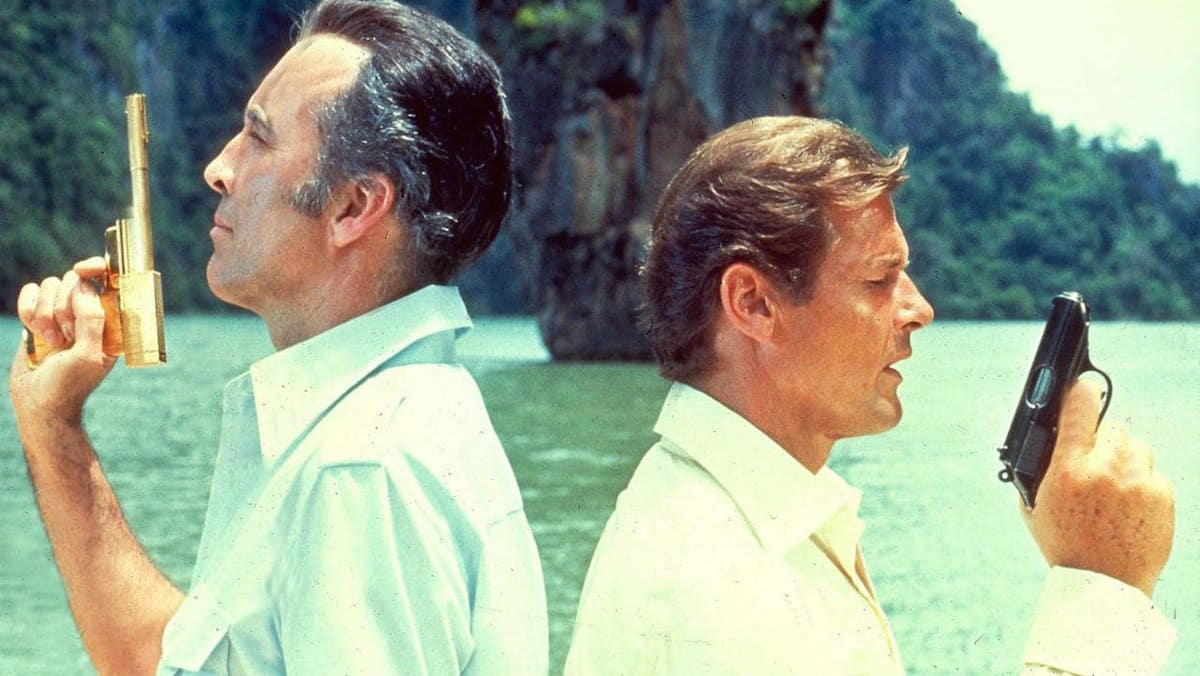 Welcome to another edition of Does It Look Like It’s Our First Time?

My name is Ryan Roch, and this week I’ve shipped Allen and CJ off to a dojo, and I’m jumping right into Roger Moore’s sophomore outing as agent 007, The Man With The Golden Gun. Starring Moore, Brit Ekland, Maud Adams, Herve Villechaize as the diminutive Nick Nack, and the iconic Christopher Lee as the titular villain, this film rarely rises above baseline as a Bond film. Like so much of this series, the Moore era in particular, it doesn’t always quite know what it’s going for and liberally lifts elements from whatever was working at the time (primarily martial arts films). But owing to a fairly stripped-down plot,and a great villain somehow it all kind of works on me.

Before we get any further, I just want to get into the titular theme. On the whole, I guess it’s terrible? But it’s still kind of a banger, and I’ve been whistling it for two days. I’m not singing it because it is pure idiocy. I wouldn’t normally bother, but I’m posting the lyrics in full at the bottom of this article, because they are bonkers. One quick note: Everyone always thinks the lyric is “He comes just before the kill”, which is both hilariously filthy and literally accurate to the character of Lee’s Francisco Scaramanga, but is not the actual lyric. Knock it off, you dirty birds.

As for the credits sequence accompanying the aforementioned song, it’s pretty much standard Maurice Binder fare outside the very awkward choice to include suggestive golden barrel stroking. It’s right in line with the rest of the film, in that it’s about as rote as much of the Bond paraphernalia herein.

The Man With The Golden Gun, loosely adapted from Fleming’s final Bond novel, begins with a duel to the death on Scaramanga’s private island home. Scaramanga dispatches a mobster brought to him for sport by his best frenemy Nick Nack. The arrangement these two have is that if Nick Nack can find someone to kill Scaramanga in a duel, he is bequeathed the island and all his possessions. Back in London, M has received one of Scaramanga’s favored golden bullets in the mail, stencilled with the numbers 007. Naturally, he removes Bond from his current assignment, ordering him to either resign or kill Scaramanga. Sure, why not?

From there, we’re treated to a pretty standard hunter/hunted movie focused on Bond’s efforts to proactively ice his would-be killer. If it seems like I’m overstating the point it’s because the film really doesn’t do much to distinguish itself. There are exciting stunts and chases, well filmed, and it features a dopey plot about solar energy that adds nothing at all. There is a dumb side-quest into the realm of martial arts (always generalized as karate), that I still can’t reckon with. Herein is a big problem with this film, as well as pretty much all of Moore’s run. There’s just some really bad elements that taint the good stuff. If I were to come up with a log line for this film, I’d probably use the most repeated line from the closed captions: [SPEAKING FOREIGN LANGUAGE]. I mean, why are there statues of Japanese sumo wrestlers in Hai Fat’s Hong Kong palace? Did his girlfriend need to be named Chew Me? Then there’s the line about there being cults where having three nipples denotes invulnerability and sexual prowess. You know what? I call bullshit, movie. Bond calling people orientals and insulting their wine is not something I hope you’ll be surprised by, cause that’s happening, player. Then there’s the unfortunate decision to bring back everyone’s least favorite Sheriff, J.W. Pepper (last seen in Live And Let Die) for an extended canal and car chase. That chase actually ends up really working, despite his cloying presence, but I would like to digress and have a word with 70s audiences about their love of this kind of Slim Pickens crap. Why is this everywhere? Seriously, dropping J. W. Pepper on us again is just tedious. Pepper shouting every thought he has and referring to everyone around him as “little brown water hog” or “pointy-heads” gets very old, very fast. Still, his extended presence does lead to two of the better moments in the film. First, the inexplicably-scored car flip (a slide whistle? Really?), and then the great scene where Scaramanga eludes capture by attaching wings to his car and flying away with the captured Mary Goodnight. This is pretty indicative of the Moore era as a whole. Some really exciting and fun bits, usually stuffed with things that make you cringe your face off. I’m not sure if modern audiences can really appreciate the appetite for corn and racism we’d developed in the 70s and early 80s, but just know that this is pretty tame for the era.

There are a few dramatic turns and reveals, but what they do to the story is disconnect it rather than intensify or focus it in any way. It’s a very strange way to plot a film, and because of that strangeness, this film does really manage to cohere into a pretty fun outing. A lot of this is down to Roger Moore and Christopher Lee. Amidst a plot that throws sci-fi, stunts, and sex into a blender to reconstitute a lot of what we’re expecting and familiar with, Lee especially elevates pretty minimal material to bring us something fun but very sinister that Moore can bounce off of. Moore has settled into the role, and this story gives him ample chance to shine as everyone’s favorite chill Uncle Bond. The one liners here actually tend to work, which is always a blessed relief. I’m not gonna lie: A lot of them are about dongs. But I keep scratching my head about this film’s bizarre perseverance. I totally dig that so much of the story is incidental. I like the choice to scoop up bond during the assassination attempt, only to reveal that he was not even the target, and should have stayed on his case. I like the fact that while Scaramanga would love to kill Bond, he takes absolutely no action on it until Bond flat shows up at his house. I love that Christopher Lee’s whole thing is just bloodlust. His backstory in the circus is silly but fits the tone. I dig that his friendliness with Bond is clearly boredom and professional admiration, rather than plot contrivance. There’s something refreshing about how lackadaisical it all is. If you asked me to show you how Spectre missed the mark, I might actually point at this film as a successful attempt. If there’s a problem with this approach it’s that once Scaramanga is off the board, we still have all this dumb b-plot to contend with. Also, Nick Nack. Nick Nack sucks.

All in all, I can’t recommend this film as a shining beacon of the Bond franchise, but for those already drawn to the exploits of 007, I can heartily recommend you check this one out with fresh eyes. From set to set, and even shot to shot, you will see the full gamut of good and awful production design, but large sections of the film are a joy to look at, and even when it drags, there’s never more than a few minutes distance to the next weird or actually fun element. There’s enough baffling incongruity to actually make it interesting, and the acting and chemistry all very much works.

Lyrics to “The Man With The Golden Gun”, as sung by Lulu:

“He has a powerful weapon

He charges a million a shot,

An assassin that’s second to none,

Lurking in some darkened doorway,

Or crouched on a roof top somewhere,

In the next room, or this very one

Love is required whenever he’s hired,

It comes just before the kill.

No-one can catch him, no hit man can match him

For his million dollar skill.

Has come to a glittering end,

For a price, he’ll erase anyone

His eye may be on you or me.

Who will he bang?

We shall see. Oh yeah!

Love is required whenever he’s hired,

It comes just before the kill.

No-one can catch him, no hit man can match him

For his million dollar skill.

Has come to a glittering end,

If you want to get rid of someone,

The man with the golden gun

Will get it done

With his golden gun.”