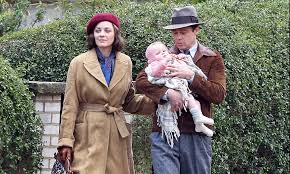 In 1942, two spies meet in Casablanca on a mission to assassinate a German ambassador. While on this mission, they fall in love and are eventually married. They live a quaint and happy life until the husband is warned that his wife may be a German spy.

This is the premise that was sold to us in the trailers and in the plot synopsis of Allied, the latest film by Back to the Future and Castaway director Robert Zemeckis, and it’s a good one. Unfortunately, the film itself manages to squander every single ounce of promise that said premise holds. While there is plenty of action to be had throughout, the film never manages to achieve the pulse pounding mood it is aiming for. In fact, the film doesn’t have a pulse at all.

Perhaps the film’s greatest flaw is the central relationship around which it is built. Allied wants us to care about Max (Brad Pitt) and Marianne (Marion Cotillard), in fact it needs us to. Otherwise, the second half reveal that she may be a spy, and Max’s turmoil over the idea that he might have to kill her would fall flat, and fall flat it does. Every step of the way Cotillard and Pitt fail to make this relationship feel real. This is wildly disappointing as Pitt and Cotillard are both incredibly charismatic performers in their own right, so when neither of them manage to bring an ounce of their usual verve to the screen you can only sit confused. Every line delivery is stilted, and as a result, the admittedly rough script (at one point Max’s boss loudly proclaims “Show me your chickens, Max!” with a completely straight face) stands out all the more. While the awkward wooden interactions work at first when Max and Marianne are merely pretending to be a loving married couple as a cover, it continues well after they are actually married, and it begins to be painfully awkward. On multiple occasions I found myself cringing as Pitt and Cotillard delivered line after stilted line of what I believe was intended to be romantic dialogue with all of the conviction of two teenagers in an after school special. So when Max begins to break down over his fear of losing his wife, I struggled to fight my urge to scream “WHY?” at the screen, as nothing about their relationship seemed particularly worth the amount of pain Pitt was attempting to convey in those moments.

Bad dialogue and wooden performances can usually be forgiven though if a film manages to either produce compelling action or if it has something to say, but unfortunately neither of these happened to be the case. While there are multiple action sequences throughout the film, none of them, beyond the assassination of the German ambassador, were particularly memorable. And if you were expecting this film to be a complex meditation on love, trust, and the lies we tell at the beginning of a romance, well, I have bad news.  At no point does Zemeckis or any of the cast and crew manage to elevate the pedestrian script or live up to the promise of the story. So when we finally roll around to the incredibly melodramatic ending, not only does it feel unearned, I legitimately found myself asking “Am I supposed to care about any of this?” If so, it was a major swing and a miss.

I could go on and on about the problems with this film, but that would require me to devote more thought to it than I already have, which I am loathe to do.  Instead I will leave it at this: Allied has many problems, but by far the worst is that it is boring, which a film with this premise had no business being. If you were thinking about seeing Allied this holiday weekend I would legitimately recommend doing anything else. It is my least favorite film of the year. And I saw Batman v Superman, so that should really say everything.