THERE WAS AN IDEA… Winning Wars With Niceness (and CAPTAIN AMERICA)

"I don't want to kill anyone. I don't like bullies. I don't care where they're from." 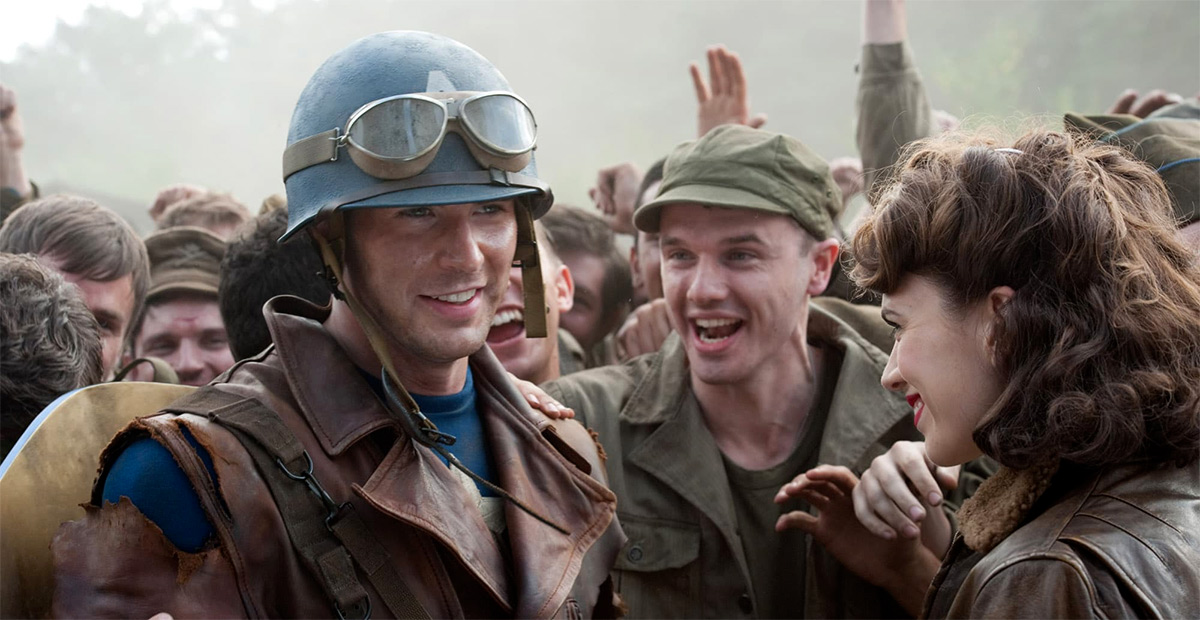 L. P. Hartley once wrote, “The past is a foreign country; they do things differently there.” That is certainly true of 1942, the year that Marvel’s Captain America: The First Avenger came out. In those days it was pretty clear cut and agreed upon that Nazis were bad, and that there were no nice people on their side. They needed to be stopped. Oh, crap. Wait. Sorry. 1942 is the year that Captain America: The First Avenger was set. It actually came out in 2011. But my statement still stands. In 2011, we still all agreed that Nazis were terrible people who needed to be stopped.

What a simpler time that was.

After the first Iron Man came out, despite not being someone who grew up reading superhero comics, I was pretty pumped at the idea of an extended superhero universe. It’s an idea that was obviously familiar to people who were comic fans, but to a person as ignorant of comics as myself it was utterly novel. I loved it. It struck me as a wonderfully new form of cinematic storytelling. But I was also skeptical. Iron Man established a heightened and fantastic universe that was still comparatively grounded in that it was based in recognizable technology, as ridiculously advanced as it was. It also had Robert Downey Jr.’s incredibly charismatic and snarky presence working for it. What I heard was coming in the Marvel Cinematic Universe was not that.

Thor in particular struck me as the giant road block in the franchise. Would popular audiences buy this totally crazy cosmic, extraterrestrial version of Norse mythology as part of the same universe as Tony Stank—I mean Stark? I really, really doubted it.

You’d think I’d have learned my lesson from that, but you’d be wrong. I felt certain that any movie featuring Captain America would fall flat on its face. Again, I was fairly ignorant of the character beyond the broad strokes. I thought that, first of all, a character named Captain America would go over like a lead balloon in other countries. Secondly, I thought that the character was just too cheesy for the American public. I use that word “cheesy” very carefully, as it’s a word I really dislike that is generally used as a “Get Out of Jail Free” card for criticisms utterly lacking in substance. A Boy Scout character like Cap would just be too pure and earnest for modern audiences, and his spangly costume would be (again) too cheesy.

Nothing silly about this.

Yet again, I was wrong. From that point on, I learned not to underestimate what Marvel is doing. Captain America didn’t crack the top ten at the box office for 2011. It was after all up against Harry Potter, Transformers, Pirates of the Caribbean, Twilight, Fast Five,1 and Mission: Impossible. Also, The Smurfs, but let’s not linger on that. It still carried its own weight, and shouldered a whole hell of a lot of setup for the MCU that was to come. Critical response? Quite good as well.

In retrospect, it’s remarkable how well The First Avenger works. The choice of Joe Johnston was perfect, accomplished as he is in creating crowd-pleasing adventure films, and having the experience of The Rocketeer under his belt. Both The First Avenger and The Rocketeer manage to balance fun characters, fun adventure and nostalgia without the latter quality becoming totally obnoxious. The “dieselpunk” aesthetic in both, which imagines highly advanced technology in an interwar/World War II setting, is just so much fun that I can’t help but feel at least some level of affection for both.

But none of The First Avenger would have worked without Chris Evans’ Steve Rogers. A film that could have been a jingoistic exercise in “Greatest Generation” hagiography and xenophobia is instead defined by this character. Rogers is not a blood-thirsty “patriot.” He is not a born solider. When he is asked if he wants to join the war effort so he can kill Nazis, he responds, “No.” He doesn’t want to kill anyone. He just doesn’t like bullies. He wants to protect people. That’s what motivates him to get into no-win fights with a hulking asshole heckler in a movie theater. That’s what motivates him to jump on a grenade to save his fellow trainees. That’s also what motivates him to, having just bulked the heck up thanks to the super-soldier serum, pursue the Hydra agent who just killed his friend Abraham Erskine. What makes Steve Rogers Steve Rogers is not his gigantic biceps. If the procedure had failed, 90 pound weakling Steve still would have chased after that Nazi bastard. He probably would have failed, but he would have tried. “I can do this all day,” as he likes to say.

No matter your sexual orientation, we are all Peggy Carter.

“You don’t win wars with niceness,” says Tommy Lee Jones’ Col. Phillips, as he tosses that (dummy) grenade in Steve Rogers’ direction, “You win wars with guts.” As it turns out, Rogers has both, and it turns out you need both. Being a “good man,” as Erskine puts it, isn’t just being nice. To me that just implies politeness. It’s having ideals, a strong moral core, and empathy. Captain America: The First Avenger is the film that shows him being part of a propagandistic, pro-America, Hitler-punching road show2, but also clearly establishes a character who won’t waffle when the higher-ups fall short of what America would like itself to be. We see this more in the sequels, but the groundwork is laid in The First Avenger. Steve Rogers is an idealist, not a nationalist, and he’s willing to bust heads for what’s right, even if what’s wrong is wrapped in the American flag.

There have been subsequent Marvel films that I have to acknowledge are better made, better written, and more thematically rich in certain ways, but Captain America: The First Avenger is still my favorite film in the MCU, warts and all. Not to trash-talk Batman too much, as he’s a character I often enjoy, but I think it speaks well of us that Captain America is a character who beats out the rich vigilante at the box office.3 Cap is the hero we need right now, and if we try hard enough, the one we deserve. Apparently he’s not too cheesy.

Review: A WRINKLE IN TIME Previous
Things We're Digging This Week - Week of 3/5/18 Next