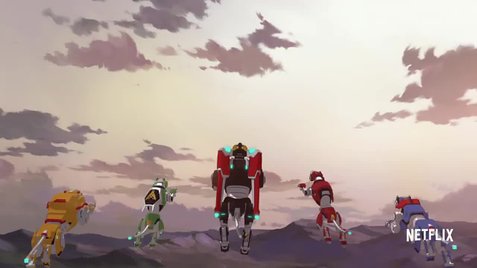 Voltron: Legendary Defender is back to it again with a short season 3. This time we have a new opponent and finally some serious back story which has been a long time coming. I’m going to be honest here, the first two episodes are a bit of a bumpy ride due to the raging case of teenage angst from one of the characters but moving forward, the show does improve. Sure we had the overall cliches of most sci-fi/mecha genres: scientist that went too far? check. Alternate reality? check. Clones? possible check.

Here’s the breakdown, as mentioned before, episode 1 and 2 are pretty much 50% angst. To be fair, the Voltron team had just lost their captain but the whole moving forward cliché took a bit of a push to get going. The series however, starts showing some promise 16 minutes into the episode when Prince Lotor, son of Zarkon and the new opponent for the season makes his entrance. Let me tell you, it is good. It gave me flashbacks to every single gladiator movie I have ever seen but once he starts talking he begins to set off some major alarm bells. Anytime someone makes a speech about “[changing] the old ways” and “[allowing] those worthy to rise to our ranks” you know things are about to get bad. Prince Lotor is downright Machiavellian in his tactics which poses quite the significant challenge for our heroes.

Episode 2 is not super exciting. It addresses the obvious issue most kids could spot in a second. If you have a powerful machine that must be operated by 5 people and you currently only have 4 people, one new person must be found to fill the slot. Those of you who have seen the old school Voltron: Defender of the Universe already know who this person is. Or you know, if you’re just a good guesser. This episode also gives the viewers a closer look at the abilities of Lotor’s four generals. These ladies are deadly. Two of them however, bear some serious resemblances to characters from Avatar: The Last Airbender. Acxa acts a lot like a less sociopathic version of Azula and Ezor’s acrobatic style along with her personality show similarities to Ty Lee. I’m not complaining, because I really love ATLA (a conversation for another day) but I caught myself referring to Acxa as Azula many times today, just saying.

The next episode is exactly what you would expect. A new leader and new pilots being shaky in their new positions. They grow overconfident due to the successes that they had in the past under the original team and they bite off more than they can chew. It is a game of cat and mouse with the cat waking away when it considers it knows the extent of the mouse’s abilities. It was a bit of a snooze.

Episode 4 shows the viewer the materials that were used to create Voltron in the first place and an alternate universe. There was literally an abandoned ship in space involved which the team just haaaaddd to investigate. As the episode went on I got major Doctor Who vibes. You know “The Girl In the Fireplace”, the majorly creepy one? Yeah, that one. Well, not as creepy as that one but if I were a Paladin I would leave the premises. There was a distinct moment in that episode where I literally gasped and covered my mouth to muffle a loud “no!”. You will know it when you see it and it is truly a dystopian nightmare.

The next episode gives us clones? Maybe??? Or a backstory in the making? It potentially lays the groundwork for some incredibly cliché storytelling that the series would have to work hard to dig it’s way out of.

Six is full of bad news. Absolutely full of them. The Paladins are haunted by their past mistakes and pieces start falling into place. A new weapon arises and they finally realize that they need more information if they are to take down Lotor.

The finale finally offers answers to several long held questions that fans of the series have been thinking on since season one, including the origins of Voltron itself. Perhaps the most disappointing things about season three is that at seven episodes, it is a bit short. After completing episode seven, I found myself hitting “next” only to discover that all that was left was a teaser for the next season.

Although this season does experience a noticeable dip in quality at one point in the middle, I would still highly recommend it. Netflix has had its hits and its misses with their original content but this show is a hit. It pays homage to the original without just regurgitating the past story with better graphics. The characters are not remaining static and they are developing into a better team.