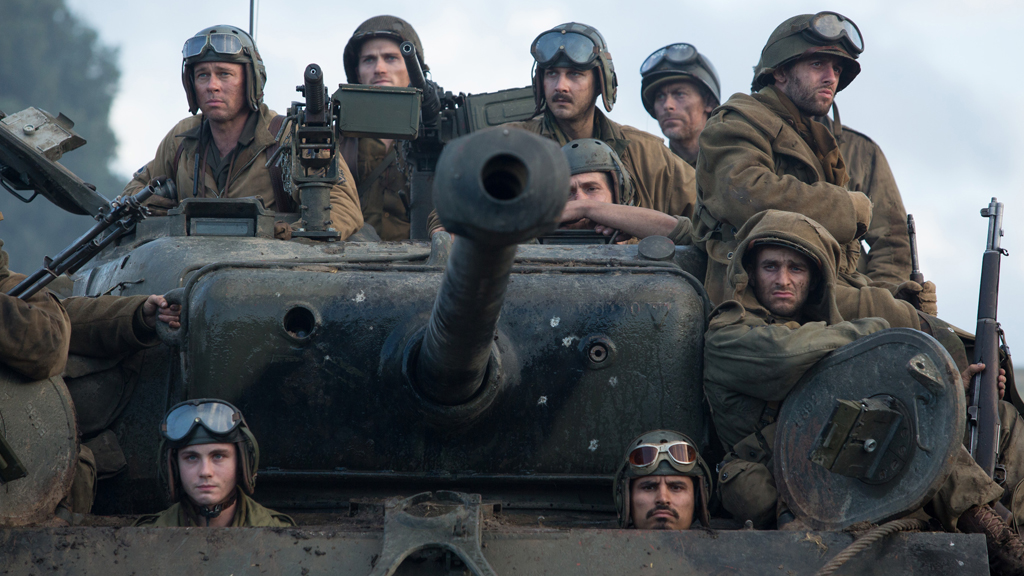 Nothing is more disappointing to me in a film than unrealized potential. A bad idea executed poorly is nowhere near as disappointing as a good idea that fails to become a great film, strictly because of the failings of the director or other members of the crew. Whether it’s a good idea that never gets off the ground or a promising film that dies near the end, nothing angers me as a film lover more than a film that should have been a classic. This brings me to this weeks’ selection: Fury.

Fury is a film focusing around a five man WWII tank crew and their time fighting in Germany at the end of WWII. We watch as they fight both the enemy and each other as they attempt to maintain some of the last vestiges of the humanity that has over time been stripped and burned away from them. They are presented to us fully formed minus their one new member, a private by the name of Norman (played by Logan Lerman), who is assigned to the crew after the death of one of their gunners. He is our window into their world and it is primarily through his eyes that we witness the rest of the war.

Fury isn’t a bad film per se. In fact, I would argue that it is two thirds of an excellent film, as the first hour and twenty minutes of this two hour film are some of the most brilliantly rendered and emotionally true military cinema I’ve ever seen. Director David Ayer gets this film off to a brilliant start, providing us with five well sketched soldiers who are further elevated by the performances of the more than capable cast that he had assembled. The action is well paced, the character dynamics carefully plotted out, and the emotional beats given plenty of room to breathe. Most every character you see serves a thematic purpose and the interplay is some of the best in the genre. And as long as that interplay is going on, the film soars. It’s only in the climax of the film where it sheds all of the character work for a chaotic thirty minute gun fight that everything falls to pieces.

Now I am not opposed to explosions and violence in military cinema. War is violent and to present it as otherwise would be to do a disservice to those that have fought and died. That being said, I do demand a general level of competence from action scenes in films and that is a test that Fury most certainly fails in its final act. All of the tight control from earlier in the film falls away as every single facet of the film begins to fail one by one in the final act. The editing is incomprehensible, causing one to struggle to track movement and locations from scene to scene. A tight sense of direction and geography from earlier in the film falls away, making it impossible to identify where the soldiers are and where the enemy is coming from. Day becomes night over the course of five minutes played out as in real time. Characters seem to teleport from location to location. A decision to focus almost entirely on the faces of the tank crew as they fire renders much of the action inert as we are simply watching the various actors scream while miming pulling a trigger. The choice to set the battle at night makes it impossible to make out details. And it is around this time that the way Ayer has been choosing to film the Nazi soldiers that the tank crew are fighting becomes a little weird. The camera loves the Nazis in Fury’s third act, perhaps a little too much. There is one particularly disconcerting sequence in which Ayer depicts a German sniper firing on the crew. This sequence plays out in slow motion with a slow dramatic musical accompaniment that makes the sequence feel almost heroic, until you remember that you are watching a Nazi trying to kill the protagonists. There are a lot of problems going on here and honestly if I took the time to name them all we would be here for quite a while. Suffice it to say that the third act is a letdown of enormous proportions.

I didn’t hate Fury. That’s what makes this all so disappointing. I was in fact planning for the majority of the film to give it a glowing review and slot it in near the top of my personal rankings for the genre. Then that ending happened and blew away a great deal of my good will. In the end I’m just disappointed. This should have and could have been a better film. That’s the upsetting part.

Review: LIVE BY NIGHT Previous
SILENCE: An Obscure Christian Defense of Multiculturalism Next