BARRY Review: Season 1, Episode 6, “Listen with Your Ears, React with Your Face 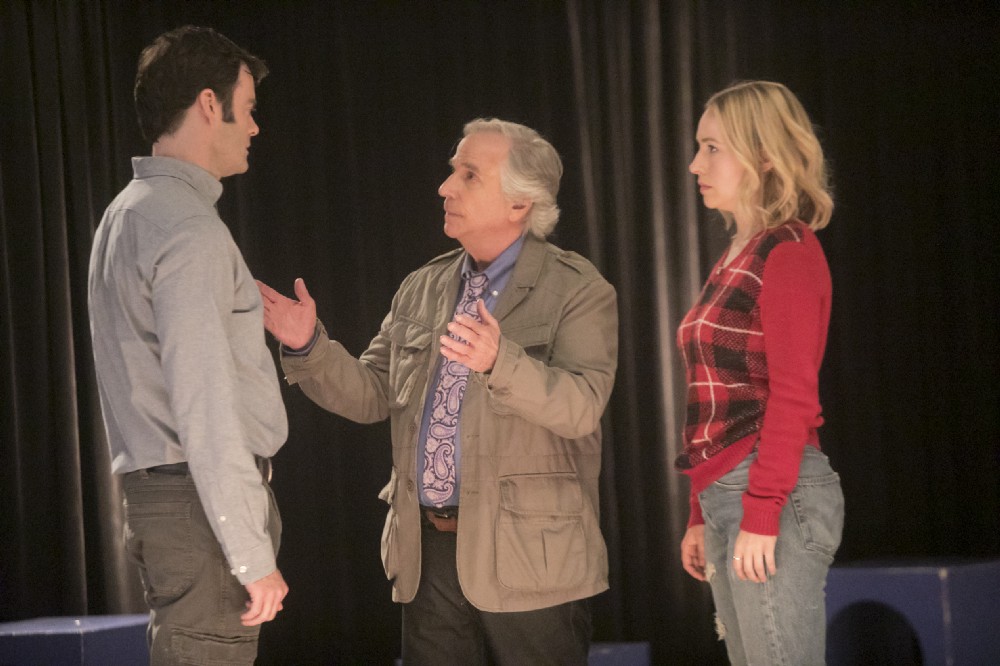 In episode six, “Listen with Your Ears, React with Your Face,” the situation between Barry and the Bolivians escalates as he and Taylor plan to kill the Bolivian leaders arriving to deal with their raided stash house, and Detective Moss trusts her gut feeling about Gene’s acting class while debating her relationship with Gene.

Have you ever gotten good advice from people who have no business giving advice? Like, they’re probably the worst at everything and yet their wisdom actually makes sense? It turns your world upside down a little, doesn’t it?

Barry has been at a crossroads for the last six episodes. He can’t extricate himself from this world of murder and crime. Fuches isn’t keen to let him go, and sees through all of Barry’s attempts to vacate his position and hand it over to Taylor. He doesn’t see any way out, and it’s Taylor who actually provides some useful advice, even if his initial suggestion (kill Fuches) goes over like a lead weight.

Taylor tells Barry that he needs to make decisions for himself and live out his dreams, whatever they may be. He even helps Barry in his own way, by offering the cash from the Bolivian stash house and dumping it into Barry’s backpack when he’s not looking. It warmed my heart a little that Taylor would give Barry all of the stash house money. Taylor is an utter psychopath but he’s the most supportive person in Barry’s life right now, and that says a lot about how dangerous the situation is and how terrible Barry’s friends are. Dale Pavinski, who plays Taylor, uses a deadpan delivery that makes everything he says hilarious even if it’s ghastly and awful. All the voicemails he leaves Barry would seem like a guy desperate for friendship, if they weren’t so disturbing and based on committing violence (“Barry, I want to kill the Bolivians with you.”)

Of course, Taylor’s support ends up costing Barry dearly. Barry finds the money in his backpack, and has to hide it in the acting class’s studio. When Detective Moss spots Vacha, the Chechen who has been stalking Barry and Sally, leaving the acting class, her Spidey sense flares up and she chases him through the streets. After their confrontation ends in violence, Moss finds Barry’s hidden money. She now has definitive proof that the Chechens are linked to the class, only she thinks the dearly departed Ryan was the one in business with the Chechens. Detective Moss is good at her job. Barry has the build to fit the fuzzy man in her dash cam photo, the skills to kill someone, and at some point, it’ll become clear that he only showed up a day or two before Ryan died.

It’s also Taylor who, after Barry fires him from the Bolivian job, shows up anyway, this time with two other guys. One of them is Chris, Barry’s friend who he invited to Natalie’s party in episode 4. It’s here where Barry starts to see how deadly serious his situation is. Even though he gets in the car, he desperately wants Chris to get out of it. The man has a wife and kids, and he’s woefully mistaken about why they’re going into the desert. It’s another example of Barry showing us and its protagonist the stakes involved. Barry’s decision to reach out to his old buddy on Facebook has now led them all to a violent confrontation.

There’s no way this ends well, and indeed it ends extremely poorly for everyone involved. The end of this episode made me gasp, possibly louder than I did during Infinity War. That’s saying a lot.

In the behind the scenes interview about this episode, Bill Hader and Alec Berg said that Barry’s aptitude and confidence in crime means he’s more likely to put himself in dangerous situations, and how that creates more problems. We see that evidenced here in the last five minutes, which are even more surprising than last week’s final five minutes. Once again, Barry is at the center of a scheme that is spiraling out of control. Now, the Chechens and Bolivians are at war, Barry is caught in the middle.

All he wants to do is be a good Macbeth.

Barry: “You can teach discretion but what [Taylor] needs, frankly, Fuches, is someone like you… to mold him.”
Fuches: “Don’t try to Parent Trap me, you dickhead.”

Vacha: “He killed my brother.”
Noho Hank: “Okay, you need to let that go.”

My favorite joke in this episode is when Barry apologizes to his acting class for yelling at them (in episode five), and they apologize to him for not understanding his experiences as a Marine. They say that they’ve taken a quiz and they know they’ve lived in a bubble their entire lives. Then one of them pipes up that they’ve been trying to understand, so they’ve been reading books about World War II.

Hiro Murai directed this episode, just like he did last episode, and it shows how brilliant he is at shooting night scenes and action. When Detective Moss takes off after Vacha, you clearly see what’s happening and Murai uses lighting from cafes, street lamps, reflections off cars, and other natural city elements to illuminate the chase.

Henry Winkler should receive an Emmy for the way Gene walks away from Detective Moss after she rejects him. He looks devastated, and the way he makes his takeout box swing a little bit inside its bag adds an extra bit of pathetic.