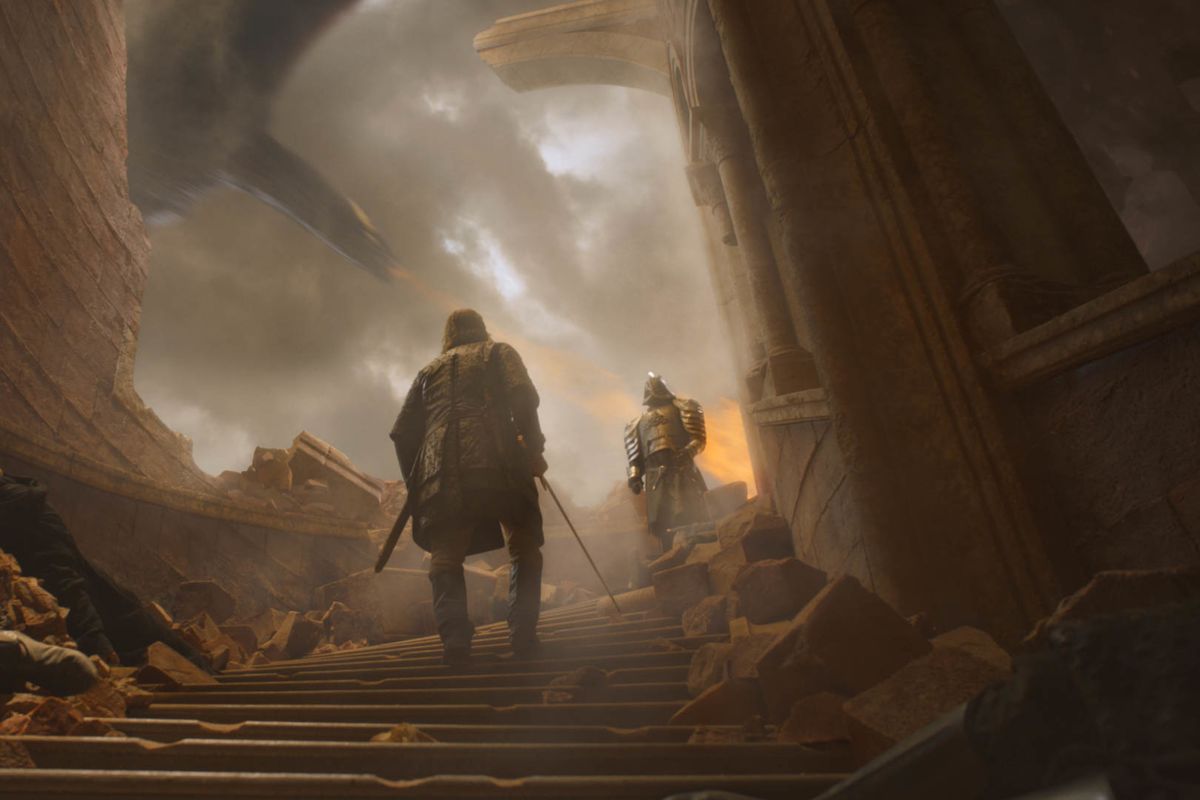 “Yeah, that’s you. That’s what you’ve always been.”

This is a line spoken by Sandor Clegane to his brother, the Zombie Mountain, at the arrival of their final confrontation in “The Bells”, Game of Thrones’ final climactic battle episode, but one could very easily read it as a mission statement for the episode’s thesis as a whole. While in recent seasons, as creators David Benioff and D.B. Weiss went off books, Game of Thrones has adhered to far more straightforward (and some might even say cliched) storytelling than its earlier seasons, riddled with closing loops and fan-servicey elements and an overly neat and tidy scaling down of the show’s originally sprawling narrative, “The Bells” feels like a brute force move to not only return the show to its original harsh modus operandi, but also like a final mission statement that feels very well as though it could have come from George R.R. Martin himself. The real truth of the game of thrones is that there is no winner, only losers; and when everything is on the line, society’s true selves are revealed.

So that is how Benioff and Weiss arrived at their big omega reveal in tonight’s episode, where Dany is faced with King’s Landing’s unconditional surrender and chooses to embrace vengeance and burn down the city anyway. As the late Jorah Mormont once said, “There’s a beast in every man, and it stirs when you put a sword in his hand”. When Dany began her fiery flight of destruction, so too follow the Dothraki, the Unsullied and the Northmen, and they begin to formally sack the city and kill civilians as well as Lannister soldiers that had already laid down their arms. It’s a shocking, grotesque sequence, where characters and men we’ve come to view unconditionally as “the good guys” begin to loot, pillage, and murder everything and everyone they see. The level of gratuitous carnage on display reminded me a bit of Rambo, as Benioff and Weiss rubbed the audience’s nose in the soot and dirt of the fighting.

Unfortunately, “The Bells” was also a prime example for why this show’s rushed and truncated storytelling over recent seasons has come to bite it in the ass. Jaime and Cersei’s arcs come to an abrupt, sad end, going from Good Guy Jaime in “A Knight of the Seven Kingdoms” to a heel turn last week, to his final stand here reeking of extreme whiplash. The Golden Company and the Iron Fleet were dispatched in about two seconds flat (though the former actually feels like a nice subversion in comparison to what they could’ve done with it). And while there most certainly have been plenty of indicators towards the possibility of Dany going bad throughout the show’s run (dating back to  the first season where she watched her brother get killed by molten gold with a lack of empathy), her ramping up to full-on Mad Queen here felt rather silly, complete with makeup to make Emilia Clarke look gosh darn cuh-raaaaaaaaaaaazy. Dany having Varys burned alive felt like a fairly organic development from previous episodes, yes, but then having her jump to burning a city of innocent people while also failing to dramatize the full making of that decision feels like the biggest consequence of the thinly sketched arcs of the last few seasons yet. For better or worse, the discussion of how well that choice was executed (which I think is really solid and true to the spirit of the show/books in theory) will come to define the discussion of this big dumb ending.

And yes, make no mistake, this big dumb ending was pretty goddamn dumb. The gestures towards grace and restraint from the show’s early battle episodes are long gone, and in its place is some wildly overblown spectacle. Hell, the Clegane brothers have their final battle in just about the most hilariously epic manner possible, complete with them falling into a pit of flames as though they’re Gandalf and the goddamn Balrog. To his credit, Miguel Sapochnik directed the hell out of it, staging impressively large and impressively vicious carnage in a way that the restrictions of “The Long Night” prevented him from doing there. There was an impeccable sense of geography, with shots constantly being composed to remind us where the central conflict of the battle was in relation to the Red Keep and the civilians of the city.

With cinematographer Fabian Wagner, Sapochnik also gave us some stellar, gigantic imagery. The shot of the brothers Clegane meeting on the staircase for the last time with the dragon blasting in the background, the close-ups of Arya’s exhausted visage as she stumbles through the soot-covered ruins of King’s Landing, Tyrion looking through the ruined outer wall as the city’s final sacking began. Technically, this episode was completely unimpeachable, and as the show’s last true big battle ride, you really felt the largeness of what was happening1.

Oh, also Qyburn dies in the most hilariously ignominious manner possible, and Euron Greyjoy (finally) gets killed off so we won’t have to deal with his nonsense next week, which can only be a blessing.

If the threads leading up to “The Bells” had been a bit more fleshed out and less rushed as they have so often been in recent seasons, it could have been the ultimate final harsh lesson Game of Thrones had to teach. As is, it’s an interesting and bold idea that feels right for this universe mired in dodgy and truncated execution. It’s pretty clear now that the show’s final showdown is gonna be between Jon and Dany, and next week has a lot of ground to cover to wrap this thing up. Hopefully they do it in a way that doesn’t leave such a bad taste in the mouth that the prospect of remembering this show fondly becomes impossible.