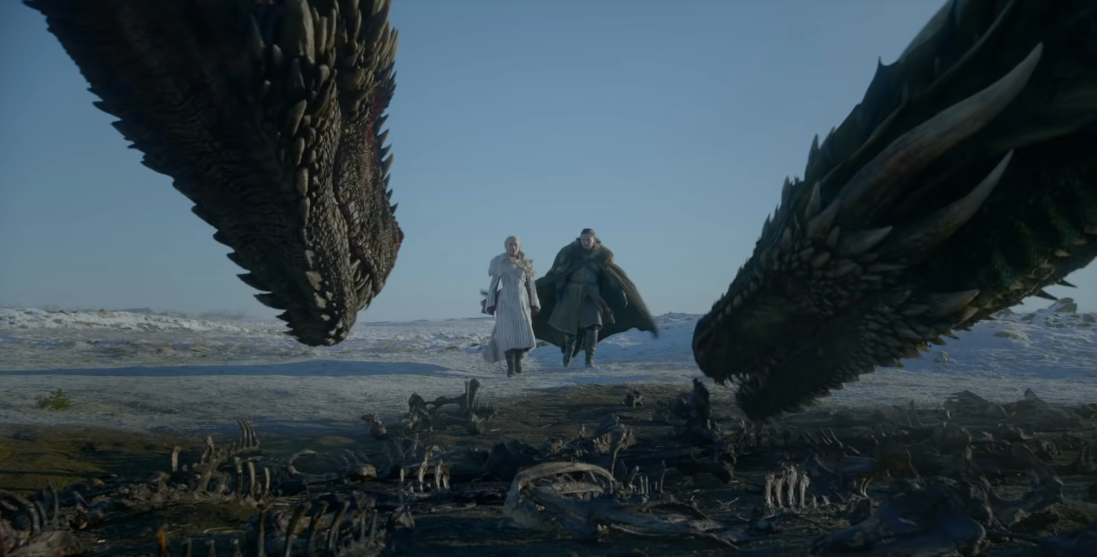 After eight years and almost 70 episodes, Game of Thrones has finally begun unspooling its endgame in last night’s season premiere, simply titled “Winterfell”. The show’s formerly signature disparate narratives have very rapidly come together in the last two seasons, and to reflect this the final season was given a new, visually arresting title sequence that cuts out the various locations and focuses us on the ones that now are vital to the show’s final hours:

Winterfell and King’s Landing are the two focal points now, as the show moves back to the position it had at the very beginning. Writer Dave Hill and director David Nutter go all-in on this notion, with “Winterfell” very deliberately recreating the structure of the pilot episode “Winter Is Coming” and being loaded with callbacks to the show’s first season. Like the pilot, “Winterfell” opens with a boy (not Bran this time, obviously) climbing a castle wall to get a look at the coming royal entourage.1 Jon visits Winterfell’s godswood, much like Ned did. Bronn is reintroduced frequenting a brothel, much like Tyrion’s introduction. When Jon finds out about his true parentage from Sam, it’s before the statue of Ned in Winterfell’s crypts, echoing Ned’s promise to Jon from “The Kingsroad.” The episode ends with Jaime’s arrival at Winterfell as it prepares for the coming Great War, and once again brings him face-to-face with Bran, who he pushed out of Winterfell’s tower for the big cliffhanger that closed the pilot.

Rather than significantly move the plot further, showrunners David Benioff and D. B. Weiss opted to use “Winterfell” to give us one last calm before the storm, to take stock of the characters and their relationships before they go on one last ride — literally, in Jon’s case, since it is now clear he will indeed be the rider of Rhaegal, the dragon named for his birth father, in the war to come. A large chunk of the episode is composed of reunions, including Arya’s reunions with Jon, the Hound and Gendry, Tyrion’s reunion with Sansa, Theon’s very quickly resolved rescue of his sister, and the aforementioned awkward closer of Jaime and Bran. Additionally, we get Daenerys’ revelation to Sam that she had his brother and father burned alive, a nice continued thread from last season that I was sort of worried would be dropped entirely.

“Winterfell” also leans very hard on the notion that Daenerys’ future in the North is not set in stone, with everyone from Arya and Sansa to Lyanna Mormont to the common folk expressing an unwillingness to trust her and follow Jon in bending the knee. It remains to be seen how much of this will play a role in the final batch of episodes once the Great War gets properly underway, but it’s nice that they’re at least trying to continue some of the political element that defined the earlier seasons. It also remains to be seen what exactly the role of Cersei, Euron and the Golden Company will be in this last run, but they’re presumably going to take part in the battle in King’s Landing that we all know is going to happen in the penultimate episode (where Euron will hopefully, finally be offed and stop eating up screentime). Bronn is also charged by Cersei with killing Tyrion and Jaime, which will presumably give him one last arc as he finally gets to prove that he actually does care about the two wayward brothers in this family.

As someone who generally thinks the later seasons’ move into fun-but-scattershot, Lord of the Rings-Lite fantasy is less satisfying than the earlier seasons’ more concerted attempts at dramatic and thematic cohesion — aided by the fact that Benioff and Weiss were working directly from the source material rather than Martin’s notes and concepts, to be fair) — this was a solid enough start to the show’s last run. The echoes to the first season felt purposeful and it’s nice to spend a little more time with these characters before we will presumably watch a lot of them die. Judging from “Winterfell”, Game of Thrones is going to have a spectacle-laden, entirely respectable and non-embarrassing conclusion, which is more than you can say for a lot of shows.2

KILLING EVE Season 2, Episode 1 - "Do You Know How to... Previous
Hozier’s “Shrike”: Butcherbirds, Brambles, and... Next