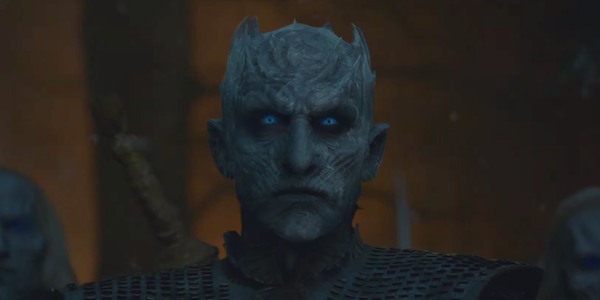 Over the years, Game of Thrones’ battle episodes have both become a tradition… but they’ve also somewhat become a tired inevitability. It’s crazy to think now back to the first season, where because of budgetary reasons all the battle scenes took place offscreen and we were often treated to an aftermath involving our main characters and a handful of extras on a hillside. That is, until “Blackwater”, when the show’s budget was given a substantial increase for the first time in order to depict one of the book’s pivotal sequences onscreen in its entirety. And while “Blackwater” seems almost quaint now on a scale level with its collection of extras fighting on a small patch of waterfront in front of a gate, in my opinion it remains the best battle episode the show ever did, because the limitations they had in terms of depicting the scale forced them to make character-centric choices in the storytelling, thus leading to an episode where the few moments of scale were thrilling, but the various stories being interwoven within the battle were its real, beating heart.

And in the subsequent battle episodes, it gradually feels like that aspect has been lost in favor of often visually breathtaking but also rather one-note spectacle. “The Watchers on the Wall” and “Hardhome” at least managed to maintain some of that character centrality while offering up a larger dose of scale, but “Battle of the Bastards” and “Beyond the Wall” ultimately had little to offer beyond the technical impressiveness of the battle being staged mixed with some tired dramatic cheats in order to give the illusion of drama happening within the overblown spectacle.

“The Long Night”, on paper, represents a pivotal battle sequence in the story of A Song of Ice and Fire: the long-awaited clash between the forces of the living and the dead. And director Miguel Sapochnik (returning to direct his third battle episode following “Hardhome” and “Battle of the Bastards”) makes a game effort of making sure this one stands out. While there’s definitely an argument to be made about the battle’s visual coherency, with lots of sequences often playing out in darkness or quick cutting to obscure what’s going on, it also unquestionably captures the horror of what the situation is intending to convey. All of our favorite characters thrust into the fog of a war that’s less like a war in the traditional sense and more like a waking nightmare. Along the way, Sapochnik also gives us some truly bugnuts fantasy imagery bound to become iconic in the series: The silhouette of the White Walkers entering Winterfell as the flames roar behind them, the completely absurd but also totally awesome image of Drogon taking flight while covered in zombies, the slow march of the Night King through the flames and into the Godswood.

Additionally, there were many great character bits and mini-setpieces strewn throughout the episode. By the end of “The Long Night,” nearly every major character has stared death in the face, and some have done more than just stare. The return of Sandor’s fear of fire, the last stand of Beric Dondarrion, finally fulfilling his purpose, the final acts of Melisandre doing all she can knowing her end is near, Lady Mormont getting one last triumphant moment by sticking a giant zombie through the eye. Tyrion and Sansa’s moments together in the crypts, where they realize they actually might have more in common than they originally thought. Theon, finally getting the closure and validation he so desperately needed (even if it’s just Bran telling him what he wanted to hear) before making his final heroic sacrifice.

But surprisingly, more than anyone, “The Long Night” belongs to Arya. Her perspective slowly reveals itself as a binding glue that holds the episode together. We see her fight off the dead from the top of the castle wall, then follow her through a tense sequence within the castle that evokes THE LAST OF US or JURASSIC PARK, and then through to her final realization of what she must do with Melisandre. Callbacks are made throughout to Arya’s earliest lessons from Syrio Forel, indicating that today is her day to stare the God of Death in the face too. And she does more than stare. She sticks the Night King with the proverbial Pointy End of the Valyrian Steel dagger, in a moment that’s both stupendously silly and also hilariously badass, finally bringing the march of the Army of the Dead to its end.

And yet… since viewing the episode, it gnaws at me that this conclusion, after eight seasons of buildup, might have ultimately been too neat and straightforward. It sort of undercuts the gravitas and portent of what was revealed in “Hardhome” if all it ultimately took to bring down the Night King was getting the jump on him with a knife. Also, after all of the visions of what was to come, with the Iron Throne covered in snow and King’s Landing looking to be a desolate hellscape, to throw that opportunity away for a quick and easy kill just feels a tad too pat. And what was Bran’s role in all this, ultimately? You’d figure the Hodor reveal from “The Door” would set up him having some sort of pivotal role in the course of the events of the Great War, but all he really does is… warg into a couple of crows, give his thanks to Theon and then await his possible end. Jon and Dany also had barely any real significance in the events of “The Long Night”, with both dragons apparently surviving intact and Jon’s role basically being to have a brief staredown with the Night King and then get almost-killed by the undead Viserion. Many of the other surviving characters (Jaime, Brienne, Sam, Gendry, etc.) weren’t given much more to do than get almost-killed by the wights a bunch of times and then somehow keep fighting them off until the end. And after all the buildup with the White Walkers themselves, they mostly just stand around and then disintegrate along with their master.

So yeah, as far as a last stand for the Army of the Dead, this was both wildly successful as a visual spectacle of the fog of a nightmare war and scattershot and frustrating on a larger story/character level. So, basically, a late season battle episode of Game of Thrones in a nutshell. As someone who outright loved last week’s “A Knight of the Seven Kingdoms”, this was a somewhat disappointing return to that inconsistent late season level I’ve become so familiar with, and continues my belief that this final wrap-up in the coming three episodes will be fine, but most likely not what it could have been under better circumstances. Ah well. At least we got one damn good climax after a long buildup this weekend.

Spoilerdome: AVENGERS: ENDGAME Previous
The Best of the Marvel Cinematic Universe Next