The players have begun to converge 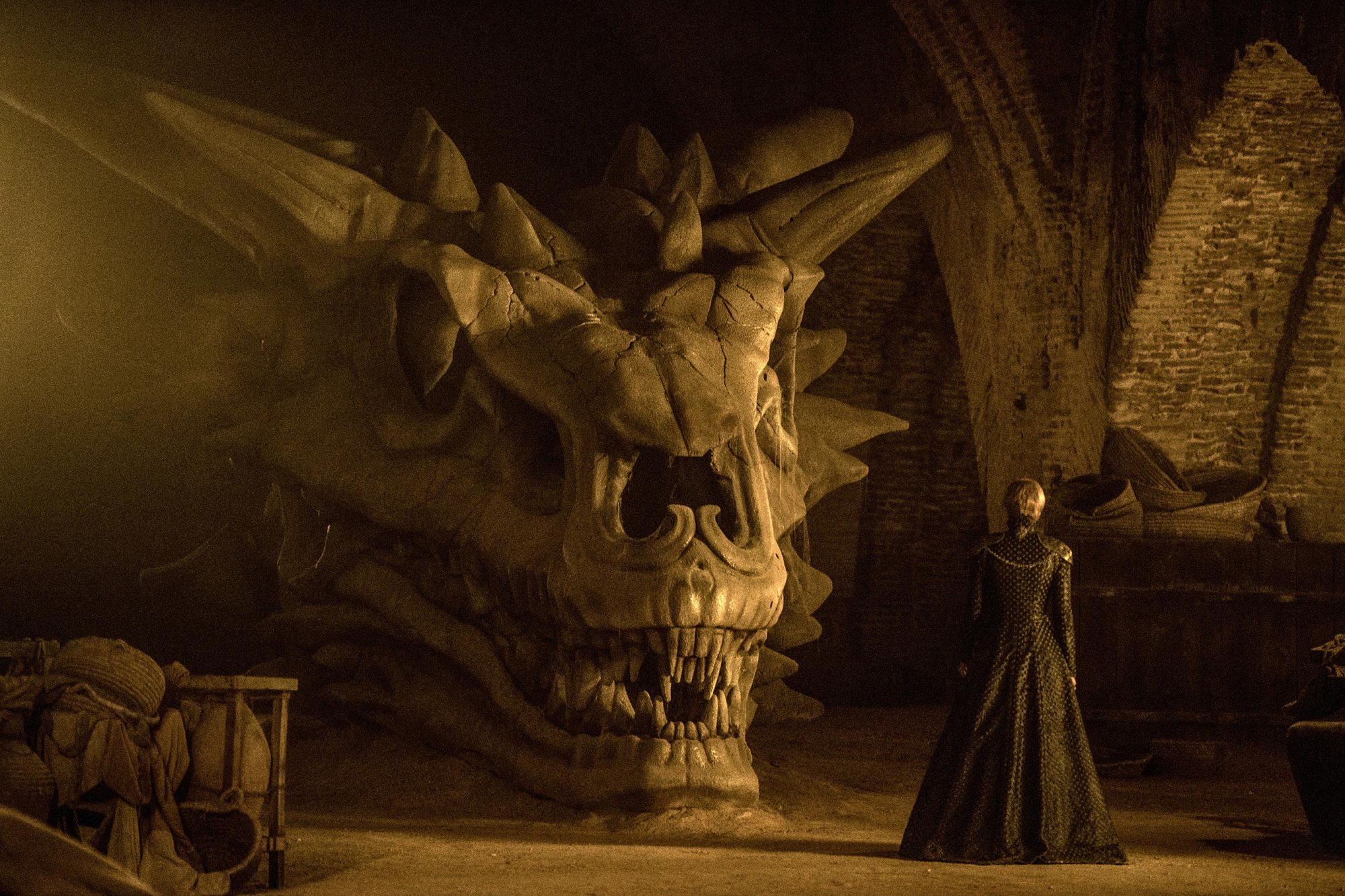 When last week’s Game of Thrones season premier ended, the board was finally set for the sure to be exciting end game of this epic fantasy saga. This week in the second episode “Stormborn”, the pieces begin to move and are beginning to provide us with the classic Game of Thrones twists that we’ve become accustomed to.

The episode begins on a spectacularly stormy night on Dragonstone, a night, that Tyrion remarks is quite similar to the one on which Daenerys was born. The newly appointed Hand of the Queen is counseling Daenerys on the appropriate course of action by which to begin the conquest of the Seven Kingdoms, urging restraint so as to insure that she has more than ashes to rule over when all is said and done. It is at this point when Varys whisperer and secret purveyor extraordinaire attempts to calm Daenerys by clearly telling her exactly what he thinks she wants to hear. Thus sets off a tense conflict in which she rails against Varys for his constantly shifting loyalties over the course of his lifetime, this culminates in Varys swearing allegiance to Daenerys and Daenerys pledging to hold him to that oath with dragon fire if need be. Right as the tension finally eases up we are treated to our reintroduction to Lady Melissandre, who has come to Dragonstone to pledge her assistance to the Mother of Dragons, declaring her to be “the prince that was promised” (prince is gender neutral in Valyrian) and announcing that she believes that Dany and Jon Snow together serve as humanity’s greatest hope against the coming darkness. This leads Dany to order Tyrion to send a message to Jon Snow requesting a meeting, setting up both a long awaited reunion between Tyrion and Jon, as well as the long awaited first meeting between Jon and Dany.

From there we cut to Kings Landing where Queen Cersei is attempting to convince the lords of Westeros to side with her against Daenerys and her armies. While the outcome of this request is at this point unclear, it does lead to several interesting reveals and conversations. We are reintroduced to Randall Tarly, father of fan favorite character Sam Tarly. Randall is a powerful lord and servant of the Tyrell family, who have in turn pledged their allegiance to Daenerys. Despite significant pressuring from both the Queen and Jaime, Randall appears prepared to side with his liege lords the Tyrells in the battle to come. We are also treated to the discovery that Qyburn, mad scientist and recently appointed Hand to Queen Cersei, has devised a rather impressive ballista which he believes should be able to take down dragons.

We then return to good old Sam Tarly who is frankly having a bit of a rough time at the Citadel. Not as rough though, I’m afraid as old Jorah Mormont who Sam is tending to for what is now an extremely aggressive case of grey scale. After a few minutes of disgusting scab picking, Sam’s mentor the Arch-Maester declares Jorah beyond help and basically tells him to decide how he wants to die.

From there we cut back to Daenerys’ war council where the grand plan to conquer Westeros is finally being revealed. Tyrion’s strategy is to lay siege to Kings Landing using the armies of Daenerys’ Westerosi allies while using the Unsullied to capture Casterly Rock, striking a deeply wounding blow to the Lannister family and the Crown in the process. He then sends out Ellaria Sand along with her Sand Snakes and the Greyjoys to return to Dorn and gather their army while Grey Worm is told to prepare to sail for Casterly Rock. Before we cut to the next location we are treated to a scene between Grey Worm and Missandei where the things they are feeling for each other finally bubble up to the surface. What? You thought I was gonna describe it? You can get that somewhere else you perv!

Because the show loves to cross cut between contradictory things, the scene between Missandei and Grey Worm is immediately followed by Sam attempting to cure Jorah’s grey scale, step one of which appears to be skinning the poor man. Needless to say this was very disgusting and I almost vomited multiple times, which was only made worse when the scene then immediately cuts to someone cutting into a pot pie. Speaking of pot pie, you know what  rhymes with pot pie? That’s right, Hot Pie! Our favorite corpulent little bread maker makes his return as Arya runs into him on her travels, only to discover while eating some of his wonderful baked goods that Jon and Sansa are alive and well and ruling the North. This immediately causes her to course correct and hopefully get to see family for the first time since season one.

Speaking of Jon and Sansa, it’s about time we cut to them. After receiving Tyrion’s message as well as a message from Sam revealing the mound of dragon glass upon which Dragonstone is built, Jon has decided to set out for Dragonstone to meet with Daenerys. Jon knows that he does not have the men or resources to fight the Army of the Dead alone and thinks that a good supply of dragon glass as well as Daenerys’ armies and dragons might be useful. In order to assuage the fears of his noblemen and women Jon places Sansa in charge of the North while he is away. This will prove to either be a brilliant or horrible decision as it does present Sansa with the perfect opportunity to betray Jon and take the Northern throne for herself if she so desires. Hopefully her loyalty to her family outweighs her lust for power but we’ll have to wait and see. We are then treated to a short scene between Jon and Littlefinger in the crypts of Winterfell. It is here that Littlefinger makes the mistake of revealing his infatuation with Sansa, a confession that comes very close to getting him strangled to death.

We then cut back to Arya for an incredibly exciting scene in which she is set upon by a pack of wolves only for it to be revealed that the leader of the pack is none other than her former pet direwolf Nymeria. While Nymeria  does seem to show some form of recognition for Arya it is not enough to overcome her need to run free so the two ultimately go their separate ways.

Finally as the episode appears to be winding down we cut to the portion of Dany’s fleet that is tasked with taking the Sand Snakes to Dorn to gather their armies. Yara and Ellaria Sand are flirting away in the cabin and having a grand old time when suddenly something strikes their ship. It is then that it is revealed that Euron Greyjoy’s Iron Fleet has found them and a spectacular battle ensues on the deck of Yara’s ship. Over the course of the battle Euron manages to slay the Sand Snakes and after a protracted skirmish capture Yara and Ellaria. It appears for a second as if Theon will have a chance to save them but alas he transforms once more into Reek on the deck of the ship, fleeing the battle at the very end to save his own skin.

This episode set a lot of things into motion. Cersei’s forces have managed to strike the first blow with their capture of of Yara and the Dornish Queen, but they were only part of Tyrion’s scheme which has only begun to unfold. Daenerys and Jon appear set to meet next episode, something that all fans of the show should be incredibly excited about. Sam may have discovered a cure for grey scale which could immediately put Jorah back into the mix, and it looks like another Stark family reunion may be about to happen. All in all it was an exciting episode with a wonderfully vicious Game of Thrones twist at the end. We’ll have to wait a week to see what happens next.