GAME OF THRONES Recap: Season 7 Episode 7: The Dragon and The Wolf

This one was insane 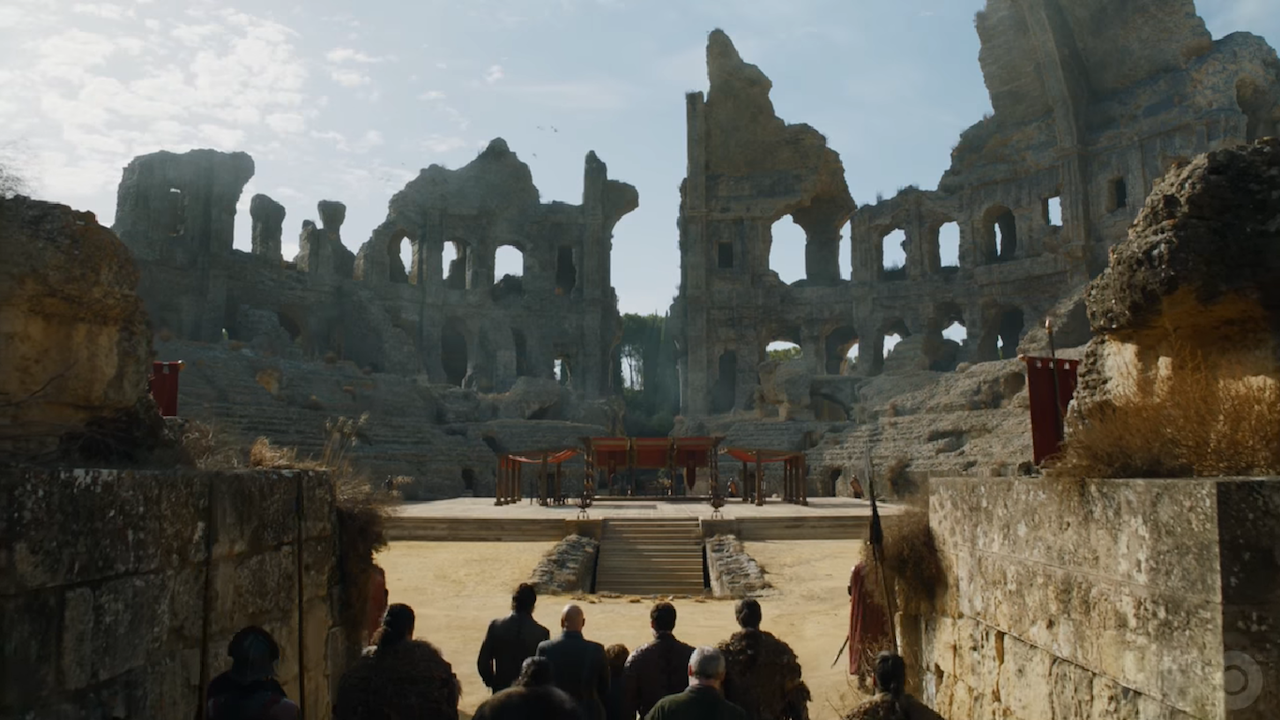 This is it folks, the grand season finale. Last night, Season 7 of Game of Thrones ended in spectacular fashion with “The Dragon and The Wolf”, culminating several multi season long arcs and setting the board for what is sure to be one of the most insane final seasons of television ever. What started as a sprawling continent spanning epic has slowly shrunk over time as one by one characters died off and the remaining ones moved ever closer to each other.  And while the sprawl of the story has decreased, the insanity and spectacle has increased. Moments that fans of the books and the show could have only dreamed about four or five years ago have now been realized in stunning detail on the screen. Let’s dive in and discuss what happened last night on Game of Thrones.

The episode begins by establishing perhaps the largest meeting of major characters since the very first episode. Jon has arrived at King’s Landing with his and Daenarys’ advisors and armies, and with the world’s most insane Jack in the Box in tow. Upon arrival they meet up with Brienne and Podrick and are escorted into the Dragon Pit, where Jaime, Cersei, Qyburn, Euron, and the Mountain await. They stand around for a minute wondering where Dany is and smarting off at each other while they wait. Dany, never being one for doing something subtle when there is a wildly dramatic option available to her, decides to fly into the pit on the back of Drogon, with Rhaegal flying close behind. After a bit of further arguing, our favorite impulsive decision maker The Hound marches into the arena with a crate containing perhaps the most important piece of evidence in the history of Westeros. He dashes the crate open and out charges the wight that was captured on Jon and Co.’s gloriously stupid trip north of the Wall. From there Jon gets to be really cool and deliver an awesome speech demonstrating the different ways you can kill the dead. Euron upon seeing all of this freaks out and flees the arena saying that he is taking his ships with him. This part also does a number on Cersei and she agrees to a truce, as long as Jon promises not to take part in the war that will follow the vanquishing of the Army of the Dead. Jon, being the noble, romantic, idiot that he is decides to go all George Washington on the proceedings and be stupidly honest and admit that he can’t do that because he’s already pledged his loyalty to Dany. Cersei gets understandably miffed about this and storms off with Tyrion following shortly behind her in an attempt to salvage the alliance that Jon may have just wrecked.

The ensuing meeting between Tyrion and Cersei is one of the most powerful and long awaited scenes on the show. It’s been three seasons since these characters were in the same room and the actors are working their tails off in this moment. The argument is pretty much a cycling through of some of the greatest moments of the first four seasons as the characters lay their issues bare, with Tyrion at one point daring Cersei to end his life. Thankfully she does not and before the conversation ends reveals her pregnancy to him. We then snap back to the Dragon Pit where Jon and Dany are once again engaging in some scene scorching heavy flirting as they discuss the history of the Targaryen family. They are suddenly interrupted when Cersei marches back into the arena to declare that she will join them in an alliance against the dead.

From there we jump to Winterfell where Sansa is more than a bit perturbed to discover that Jon has bent the knee to Dany. Littlefinger proving once again to be fairly perceptive, points out that Jon has probably fallen in love with Dany and is seeking to make a marriage alliance. They then move on to discussing Arya and the potential threat she poses. Littlefinger then proceeds to go into one of his weird little speeches about how he never trusts anyone and how he discerns their motives, laying bare the lens through which he views the world: assume the worst of people, and see if their actions line up with that. This is one of those scenes where the show runners are obviously just laying the ground work for a later scene but it’s done so well that it doesn’t particularly bother me.

We cut now to Dragonstone where Jon and Dany are making travel plans. They’ve decided to send the Dothraki north by road while they and the Unsullied take a nice pleasure cruise up the coast and meet up part of the way there. We then get a pretty touching scene between Jon and Theon, where Jon does what he does best and inspires Theon to do what he needs to do. After a particularly foreshadowy feeling conversation where Jon tells Theon that he is both a Stark and a Greyjoy, Theon decides to gather what remaining Iron Born forces he has and rescue his sister. First of course he has to convince them to join them which he does by fighting their commander. Things look like they are about to end badly for Theon when said dude decides to try to end the fight with a good old fashion kick to the nards, which unfortunately for him does not work as Theon is nardless. Theon proceeds to beat the snot out of the guy and sets his men on a collision course with Euron.

Back to Winterfell we go where Sansa has summoned Arya to the great hall. Upon Arya’s arrival in the hall full of armed knights, Sansa begins reading off a list of charges, seemingly at her sister, before coldly turning and laying all of them upon Littlefinger. It seems that Sansa and Arya laid a trap for the cunning schemer and he walked right into it. The Stark children, Bran included all present evidence of Littlefinger’s treachery, and as he falls to his knees begging and pleading for his life, Arya slits his throat. I’m not gonna lie y’all I nearly cheered when this happens. This was a moment a long time coming and true to form for both Martin and the show runners, Littlefinger’s villainy finally came back to bite him. A recurring theme throughout the show is that being noble doesn’t guarantee you anything, but being evil always costs you in the end. The most gruesome and undignified deaths on the show have always been reserved for it’s villains, and Littlefinger is no exception.

We jump back to King’s Landing where  Jaime is making plans for the ride north, only it turns out there isn’t going to be a ride north because Cersei was lying GASP. She never intended to help Dany and Jon and has actually given Euron instructions to sail across the sea and bring her a mercenary army when he returns.  Jaime, completely stunned by this development tells Cersei that one way or another he is going north to fight, daring her to try and stop him. It seems he has finally accepted that his sister is bat crap crazy, though the stage that this sets for the future is unclear at best.

We then cut back to Winterfell where Sam and Bran reunite. During the midst of a casual conversation, each of them manages to put together the pieces of the “Jon’s true identity” jigsaw puzzle that they had been carrying around. Bran knowing that Jon was the son of Rhaegar Targaryen and Lyanna Stark, and Sam knowing that Rhaegar and Lyanna were married. Bran then corroborates this with a vision of their wedding and Jon’s birth, which is intercut with images of Jon walking down a hallway to Dany’s ship cabin. Just as Dany opens her door, we witness Lyanna Stark reveal perhaps the biggest secret in all of Westeros. Jon’s true name, is Aegon Targaryen and he is the heir to the Iron Throne. The episode wasn’t finished there however, as Jon was walking towards Dany’s cabin for a reason. That’s right folks, the weird semi-incest that the show somehow managed to get us to root for has finally happened.

This episode however, had one more dramatic reveal to give. Just as it seemed like everything had died down, we cut to the wall where we see Beric and Tormund in command and watching over the Northern wilds. As they look out, suddenly the terror that Jon has spent the better part of three seasons warning everyone about comes forth. The Army of the Dead has arrived at the wall and it will hold them back no more. The Knight King, flying upon the back of the recently undead Viserion torches the wall causing it to come tumbling down and unleashing his army upon the world.

There you have it folks. The board is set for a fantastic final season. All of our heroes are heading north to face an undead threat that is heading south. Jon is about to learn the truth about his heritage and his rightful place in the world. Dany and Jon have clearly fallen in love. Cersei has once again shown her true colors, this time putting the entire world at risk. What happens next? I’m not sure, but I do know that the next year plus of waiting might just drive me mad.