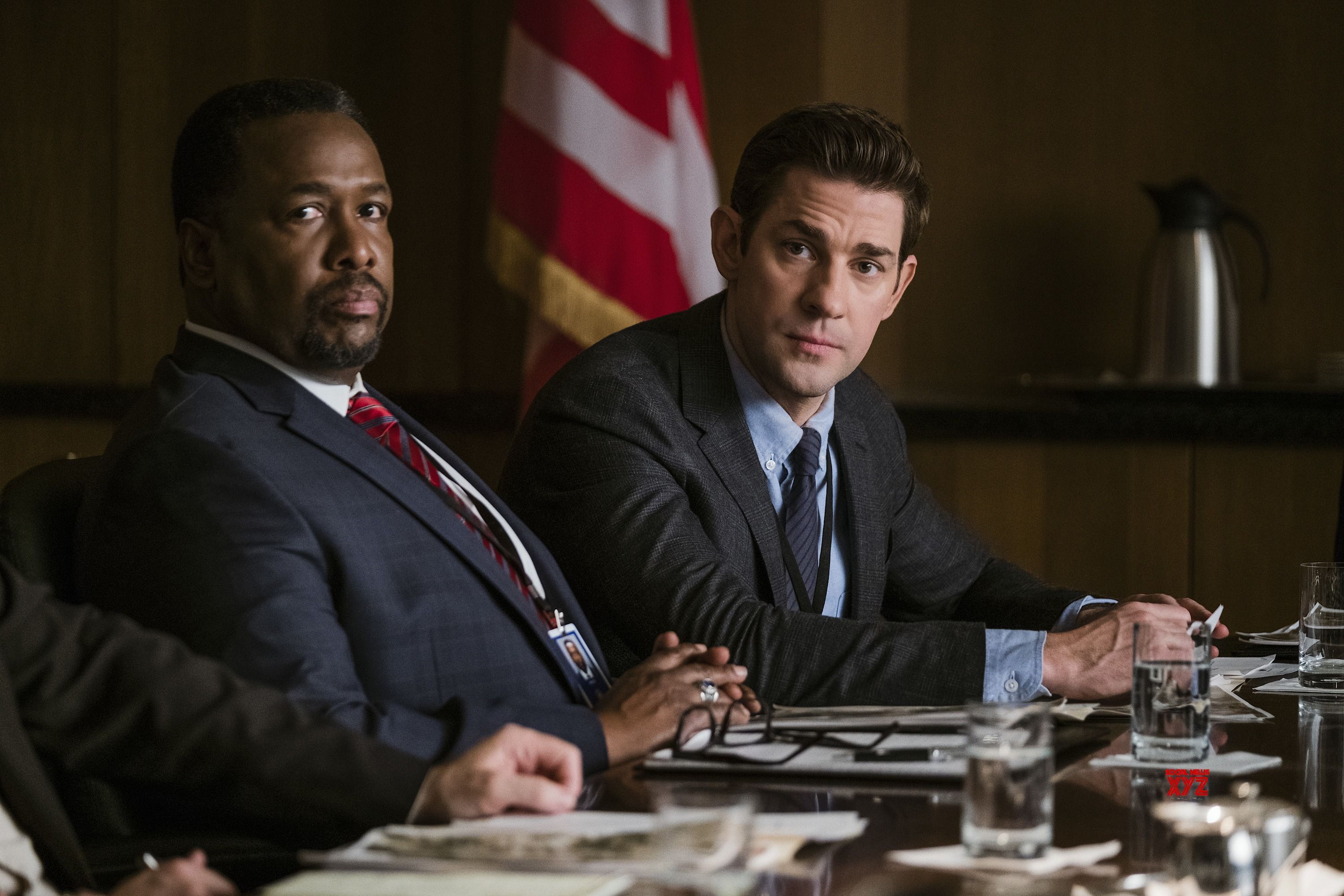 As of this writing, I’ve now seen 6 of 8 episodes of the new Amazon Studios series Tom Clancy’s Jack Ryan (we’ll just call it Jack Ryan, from here on out, if that’s okay with you. Thanks).

Created by Carlton Cuse (Lost) and Graham Roland, and starring The Office’s John Krasinski in the titular role, the new espionage show has now been picked up for a second season in advance of its first episode even streaming. This shows Amazon has a fair amount of confidence in Jack Ryan’s quality, and after having seen nearly the entire first season, I can safely state that it appears this confidence was well placed. Boasting a stellar cast, taut suspense, and a certain elegance to the unfolding plot, Jack Ryan has a lot going for it, so far. Not only is this first season wonderfully acted, exciting, and very well-made, but depending on how the series brings its story and characters in for the landing over the final two episodes of this season, it has the makings of maybe the best example of its genre in over a decade.

Jack Ryan pits Tom Clancy’s everyman CIA analyst (now portrayed as a desk jockey in the Terrorist Finance and Arms Division, or TFAD) against a secretive and emergent new splinter group of Syrian religious extremists. This shadowy group, led by the complex and terrifying man known only as Suleiman (Ali Suliman), are uniting factions across the region and employing them in covert operations in Europe toward an unknown end goal. Ryan is digging into whispers of the enigmatic Suleiman when he stumbles across a number of large electronic transactions, indicating that whatever this new group is planning, they are very close to bringing their plan to fruition, whether Ryan’s superiors choose to take these omens seriously or not. Caught in the eddies of Suleiman’s wake are his wife Hanin (Dina Shihabi) and three children, who watch with growing unease as their home becomes an increasingly militarized operating base for their patriarch’s dark agenda. All of these pieces are set up early in the first episode of the show, and we watch as they are set in motion towards an inevitable clash, with horrendous consequences. Fans of previous Clancy works and adaptations will no doubt appreciate the deliberate, yet relentless pace at which events unfold and new pieces of information are revealed, just in time for their magnitude to amp the steady build of tension to a near breaking point.

What’s truly interesting about this series is the way in which it so far prioritizes characterization. One might expect a series of this type to go either full-bore in embracing its American Exceptionalism, drawing the potentially rote and stereotypical villains as outlandish monsters or thin archetypes, while portraying Ryan’s itinerant Rockwellesque existence as everything that is great and good. However, Jack Ryan goes a different route altogether, shading our hero as an uncomplicated but stalwart loner, working through his past with an eye ever focused on his future. At the same time, it paints Suleiman as a loving father and faithful shepherd, as at home sharing companionship with his brother and family as he is planning and enacting terrible events that kill hundreds at a time. The series actually starts with a scene from Suleiman’s childhood, establishing the deep loyalty these brothers share for each other, and establishing what has so far been a riveting dynamic for how each of these characters work in this world.

As clearly as the lines are drawn between the virtuous and the villainous in this story, their unique points of view are explored to a depth that is refreshing. Both parties are clearly working to either heroic or horrific ends, but (with one or two crass exceptions) they are each painted as part of an awful cyclicality of violence, oppression, and privilege. It’s clear that Suleiman is a monster, but the show seems also to be pointing the finger of blame at the systems of Total War that have led to the conditions that created him, without absolving him his culpability. When one particularly scummy character tells Jack that if he had been born in some nice American city, he could have been the good guy, too, It’s the show tipping its hand that so much of what is driving our modern conflicts is based on blind ignorance, and the prejudice we have toward affirming that rather than growing beyond it. If the final two episodes can stick the landing, this is daring and necessary stuff.

Suleiman and Hanin, before it all went bad

The primary strength of Jack Ryan is in how it anchors its genre trappings (a reliance on plotting and action breaks) with great character work. The familiar elements of investigation, exposition, and revelation are all present and accounted for, but what makes them work as drama is the deep investment in who these characters are to themselves and each other. Each principal cast member is excellently sketched, and informed by gradually unfolding pieces of personal history, which show exactly who they are and why.

So often in modern genre shows, the impetus is to manufacture drama from character flaws and failure. In Jack Ryan, we’re asked to take characters at their word, and assume their viewpoints. John Krasinski, now the fifth actor to take on the role, plays Dr. Ryan as a man who has dedicated his life to honing his considerable (but believably human) talents in service to something greater than himself. He’s a well educated Marine combat veteran who left behind a life of guaranteed wealth on Wall Street to work for the CIA, in the hopes he might make a difference from within the cold and indifferent machine of the United States Intelligence apparatus. Unlike Captain America, the modern pop-culture exemplar of morality as a superpower, Jack Ryan is no superhuman dynamo. He’s simply a man behind a desk, like thousands of others, fighting to use his gifts in the best possible way.

Jack is haunted by his memories of Afghanistan, and the helicopter accident that nearly crippled him, but he faithfully toils on. When Jack’s section gets a new superior in the form of the disgraced James Greer (an excellent Wendell Pierce), he and Jack immediately butt heads. Greer finds Jack’s analytical leaps assumptive and thin, and Ryan worries that Greer’s skepticism and cynicism are motivated by shameful self-interest. As the series unfolds, these two men must learn to trust in the strengths and skills of the other if they are to have a hope of stopping a devastating attack. Compounding the personal friction between Greer and Ryan is the dispassionately prejudicial body of the CIA itself, which reduces the subjects of their investigations to political calculus and jurisdictional mandates and power plays. Rather than muddying the water, this particular setup really helps to define just who Jack and Greer are as characters, and forces them to act according to their natures.

Arriving in Paris, Jack and Greer have to work with their badass French counterpoints in some of the most stunning scenes in the season so far.

This is especially refreshing given that the concept of Jack Ryan himself, a late Cold War relic if ever there was one, is by no means a slam-dunk in this modern War On Terror age in which we find ourselves. When Jack Bauer tortured terror suspects to the cheers of television audiences everywhere, ruthlessly hunting down target after target with grim determination and righteous fury, he left the question open as to whether there was much of a place in the modern landscape for a character like Ryan. A character whose calm, quiet dignity, learned and professorial nature, and moral diligence in the face of horror had delighted dads in airports for decades, and now looked maybe just a little bit naive and passé.

Jack Ryan isn’t a suave and charming assassin, or an unstoppable brutish killing machine. He’s a normal man of above-average insight and intelligence who has dedicated his life to service, because he believes he can make things better than he found them. His burgeoning romance with Cathy Muller (Abbie Cornish) is interesting in that it is borne of two characters wholly committed to their own lives, seeing if they can make a go of something with someone like them. The most interesting aspect of all is the one that shouldn’t be; that they genuinely seem to like one another. They have their own stories and desires, but we get to see them build a relationship that is not plot motivating, but character informing.

This is what so many shows like this (and some of the most recent reviewers I’ve read) don’t actually seem to understand about drama. The constant refrain of complaints about characters seemingly without flaws, or who are driven by duty over personal vendetta rings as a tiresome desire for entertainment that is ‘adult’ in name only. Most adults I know take pride in their work and attempt to be as good at what they do as they can be. They work to improve themselves and those around them. The people that don’t are rarely effective or compelling. They’re self-interested bores whose personal flaws of character alienate them from the kind of support structure that is necessary to do important work of any kind. If you can’t stop being an asshole to get a marketing project off the ground, I doubt you’d be capable of chasing down villains while you make a miserable wreck of your life and the lives of those around you.

It’s not compelling drama to sidebar a mission of global stakes, unfolding in an elegantly staged and well-told way so that you can throw a pity party about missing a target and get lost in a bottle of booze. It’s compelling drama when your characters are strongly established in their nature, and have to bounce off the machinations of the plot and other characters. It’s okay to display virtue as something other than silly. It’s also okay to depict it as potentially questionable if you’re driving at something other than cynical wallowing.

So far, what Jack Ryan excels at is balancing the shocking stakes and motivations of global terror against both the indifferent systems arrayed against it and the dedication of those who make it their duty to stop it. When the plot calls for our characters to advance on the board, we celebrate, and when they lose, it hurts. And both sides lose plenty by the time the halfway point rolls around in this show. The particular strength of Jack Ryan is not specifically the character work, the crackerjack plotting and tension, or the more nuanced approach to its subject matter, but the consistent strength of each of these areas. Not only that, but the reportedly high budget for each episode in this first season is all on the screen. In tracking shots of Paris that would look at home in Mission: Impossible Fallout, visceral battle scenes out of a Michael Bay movie, and urban sieges right out of a movie like Captain America: Civil War, you can practically count the millions in the frame. My fingers are crossed that this bold approach can be carried through to the very end.

We’ll find out when Jack Ryan drops in full on August 31.