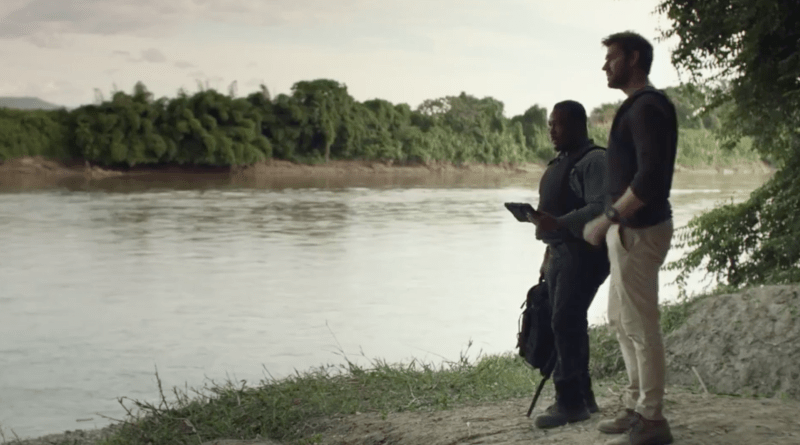 The third episode of Jack Ryan, “Orinoco” bounces from Florida to Venezuela as our two disparate plotlines converge.

Marcus, lured by the money Matice has offered, reluctantly approaches Matice as he is watching a crew load a boat onto the U.S. Air Force cargo plane. “We’re not even supposed to be here,” Matice notes to Marcus. On board, he meets Coyote and Disco and introduces himself as “Black Mamba.” No, that won’t do. Coyote dubs him Uber, which is the first of many things that go wrong for Marcus in this episode.

Jovan Adepo, who plays Marcus, persistently gives Marcus a wide-eyed stare and an easy smile even though he’s a veteran and he’s been in some hairy situations. Through some of his backstory, we know that he didn’t make it into the Navy SEALs and perhaps sees Matice as another chance to get back in; certainly, Matice recognizes that Marcus has a hunger, too. It’s just that when things go horrifically wrong, Marcus genuinely looks scared and credit is due to Adepo who has set up a key part of his character ahead of time so that we become invested in his safety.

After taking some time to regroup and determine their next steps, Jack, Jim Greer, and Mike November are headed back to the waterfront for more sleuthing. Mike has accurately deduced that it’s unlikely to be a coincidence that Jack is attacked soon after being caught at the docks. There’s more than meets the eye in those cargo containers.

While at the docks, Greer accidentally drops his bottle of heart medication and Jack immediately knows there’s a lot his partner isn’t saying. One of the best parts of the show so far has been placing Greer at the precipice of obsolescence. He knows that his heart is in the field, chasing down leads, but his body may not keep up. If the rest of the CIA knew he’d be stuck behind a desk (perhaps back at TFAD – wouldn’t that be a nightmare?). The great Jim Greer, undone by a heart condition? Not if he can help it.

This episode marks our first significant time with Gloria Bonalde, President Reyes’s presidential opponent. She is a devoted mother and a passionate candidate whose platform is stomping out corruption that silences outspoken critics and patriots like her husband. As she makes a triumphant speech in front of people at a nondescript warehouse, the fervor is palpable and a spy reports back to Reyes that she does indeed pose a formidable threat to his re-election campaign. Cristina Umaña is fantastic as Bonalde. She brings both warmth and steeliness to her role and she really conveys the honesty, authenticity, and change that people might hope for.

Our two disparate plot lines converge in this episode, with Jim and Jack greeting Matice, Coyote, Disco, and Marcus – oh, sorry, Uber – at the shore in Southern Venezuela. Their mission is to check out the docks under the cover of night and see if any of the cargo containers have weapons. Of course, things go sideways very quickly once they arrive at the docks. After checking a few containers and finding nothing, Jack takes a gamble and goes to check one more.

“Orinoco” only has one action scene, and the dock infiltration doesn’t stand out very much, but it does the job. It swiftly raises the stakes for Marcus, who is left behind in the firefight; Matice, who has to go back for him; and Jim and Jack, whose covert op is no longer so covert, and whatever sketchy element was trafficking weapons now knows for sure that the Americans are snooping around.

What works best about this scene and a sign of how well-written this season is so far, is how the writers still take time to bring it back to the characters. We know from the first few episodes that Jack, his ego a bit supersized from catching Suleiman, still hasn’t quite learned his lesson. Everything goes to hell because Jack keeps checking the containers. Yes, they found confirmation of weapons but the subsequent firefight and escape endangered all of them. They don’t know if Marcus is alive or where he is, and now they have to return to find him. Jack’s desire for justice is blurring with his desire for revenge and everyone else might be collateral damage. It’s not until Jim tells him about his heart condition that it seems to hit home for Jack that his actions have real consequences, even if everyone on the boat knows the risk. Just as Jack disobeyed orders to get out, Jim put everyone else at risk by not telling them about his heart condition. The two men sit by each other, ruminating on their own faults as they head back to safety.