Women in Film: KILLING EVE is a Deadly Obsession 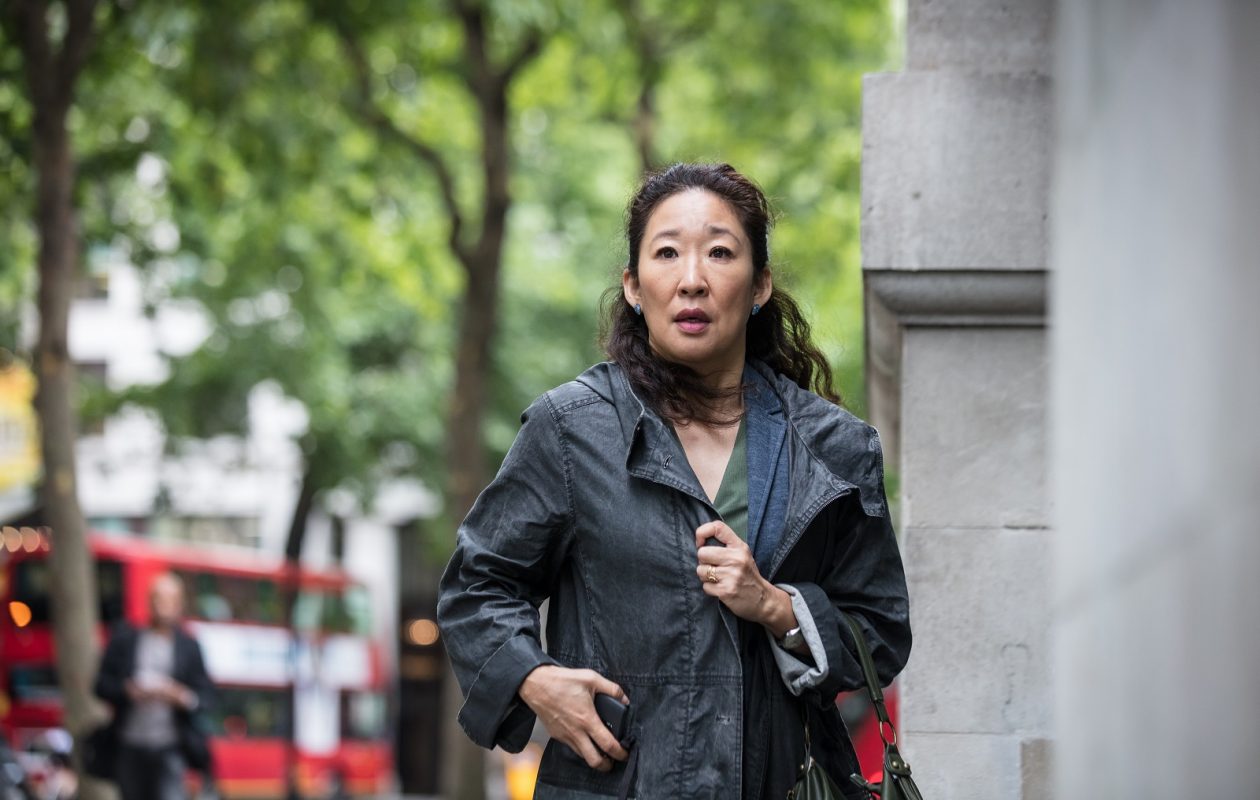 Murder is a particularly nasty bit of business. So is obsession. These two coalesce in Killing Eve, a new BBC America show starring Sandra Oh and Jodie Comer that just wrapped up a fantastic first season.

Comer and Oh play Villanelle and and Eve, respectively. Their cat and mouse chase starts before either of them even know about each other. For Eve, it begins with boredom. A well-trained MI5 officer stuck in the tedium of British bureaucracy, her secret side project is amassing research on a string of sophisticated assassinations, all seemingly attributable to one perpetrator. For Villanelle, it begins with a botched job and a stint playing nurse to clean up her own mess. Once she crosses paths with Eve, she knows that a woman has been hunting her and it’s intriguing.

What makes Killing Eve such a great show is its tone and deft handling of complex women. I attribute much of this to Phoebe Waller-Bridge, who developed it for television by adapting the Codename Villanelle series of books. If you’re not familiar with Waller-Bridge, you must fix this immediately. Seriously, watch Fleabag (it’s streaming on Amazon Prime) and catch her as L3 in Solo.

Women also wrote the majority of the first season’s eight episodes, with Waller-Bridge writing four of them. It’s within these pages that Waller-Bridge tells us what women want. Killing Eve delights and romps in the things that make our women protagonists tick, and subverts the audience’s ideas of what those things may be.

What do you want? To be seen.

Waller-Bridge, who wrote the first episode, grounds Eve and Villanelle within themselves. By this, I mean that even though they both have men in their lives, their worlds are inward-facing and about their own thoughts, feelings, and motivations. The men in their lives don’t play a part in what they think, feel, or do—and when they decide to insert themselves, we are tempted to declare them unwelcome, even if they mean well or have a reason.

Though we like to think of television as being more progressive now, it’s still been difficult to make something that is seen as being for everyone while focused on things that women care about. Male audiences are trained to only care about male matters. Everything else is still considered “women’s shows” and they can be construed as having an implicit “No Boys Allowed” sign. What’s remarkable is that Waller-Bridge doesn’t seem to care whether or not the sign is there. As with Fleabag, Killing Eve is unrepentantly the story of women.

Even something that seems as generic as “Eve is unchallenged and bored by her work” is lifted to new heights with Waller-Bridge at the helm, because Eve isn’t just unchallenged and bored. That’s a story that could apply to any gender, right? With Killing Eve, Eve’s intellectual atrophy at MI5 and MI6 is a struggle against everything that scares her once things get violent and real, and also becomes a catalyst for being seen.

After a particularly unsettling event, Eve’s husband, Niko, presents his case clearly: “I don’t want to stand between you and what you want to do with your life, but it is my job to stand in the way of something that puts it in danger.”  Niko means well, and his reasoning is solid. He just wants to keep his wife from harm. He’s terrified something awful will happen to her. Villanelle has entered their lives, bringing waves of violence and suffering with her. But the show sees Eve for who she is and what she wants, and follows Niko’s pleading with some logic of its own.

Eve slams one hand against the other and shouts, “She will keep hurting people until I find her.”

In this moment, I can see everything driving Eve reach a singular point. For Eve, it’s not just about finding a criminal and bringing her to justice. It’s about finding a place for herself within all the mayhem. She wants to be the one to stop Villanelle, not because she’s the only one who can do it, but because Villanelle has taken hold of her heart and mind. She can’t stop thinking about her, what she does and why she does it, and what she might be doing next. She knows Villanelle thinks about her, too. Villanelle, never one to be subtle, shows Eve how much she thinks about her through gifts. They are twisted tokens of her appreciation. None of this seems to have been communicated to Niko, and it doesn’t have to be. The show knows – and we know, too – that this is just for us, Eve, and Villanelle.

Throughout the show, these two women become reflections of each other, and through this mirror and perhaps for the first time, they are seen.

What do you want? To not be stuffed into a role.

You may be surprised that after Eve, Villanelle, and Carolyn, my favorite character is Kenny. He’s really young, practically a teenager, and he serves as the team’s hacker and communications expert. He also serves another role, and I won’t spoil that here, but that reveal actually allows the show to subvert other expectations, particularly that of womanhood and value. Kenny is neither there to be protected, cared for, or fawned over. He harbors a crush on Elena, his colleague (and Eve’s assistant), but there’s no fuss over it. It’s acknowledged, and Kenny is allowed to decide for himself what he should do about his feelings. It’s a clever way to bring maturity to the youngest character but also to eschew a woman’s “typical” role in these kinds of matters.

Eve’s a woman and she’s married, but she’s not to be used as a guide for a man’s desires or to answer his questions about what women want. Kenny, for his part, is approaching his crush with some real innocence, like a fawn stumbling over his legs. Whether or not his crush is reciprocated or whether he even gets the guts to say something to Elena is almost inconsequential. By not using Eve to reflect upon Kenny’s inner life, the real value of womanhood is firmly set by Eve’s standards, and not those of society that says women are best desired as romantic partners or as helpful givers of advice to steer other women to becoming romantic partners.

Likewise, Villanelle’s relationship with her handler, Konstantin is a subversion. Is he a father figure? A potential lover? The show plays with the idea before showing that really, it’s Villanelle’s own choice and her doubt over who really is in charge of her own life that is what drives her personal story, undefined by a man. Whether her handler is Konstantin or someone else, she’s never free until she gets to call the shots. She is ruthless and exceptionally skilled at homicide and yet he holds all the cards. Her personal story is about creating space without this man, and what that might look like, while acknowledging that she and Konstantin form an odd duo of dependency. He likes her, possibly more than his own children, and she finds he is a grounding force in her life, the only person she really knows.

What do you want? Love and to live and not get murdered.

Did you think this was going to be a story about a detective and a criminal? I did, too, and Killing Eve delivers on that front. It is also a worthy successor to Hannibal, a show that holds a special place in my heart for how it presented a crime procedural as just one part of an extensive and elegant table setting that became a bit of a twisted, terrifying romance between Will Graham, an FBI profiler, and Dr. Hannibal Lecter, a cannibal. Show creator Bryan Fuller acknowledged that by placing the subtext pretty much everywhere on the show.

Waller-Bridge wrote the last episode, “God I’m Tired,” which becomes the strongest indicator that Eve and Villanelle have something under the surface and like Hannibal, but it’s not as clear-cut as we may expect. Sexuality is a spectrum wherein people of all genders can be attracted to anyone of any gender. Villanelle is definitely attracted to men and women. Eve is married to a man, and in the limited time the show has spent talking about her past, it’s not clear she’s had a woman partner. The show doesn’t elect to show or tell (yet), but instead uses the question to ratchet up the tension. We as viewers don’t know whether Eve and Villanelle will meet in violence or in embrace. This matters because, over the course of eight episodes, we come to like them and both outcomes seem possible at all times. Some part of us knows their meeting can’t end well, but we think maybe they should at least get the chance to tell each other how they feel no matter what kinds of feelings they may be.

They are locked in a mutual admiration society that is genuine and exclusive. By facing each other, they are opening up their interior worlds to each other. What we don’t know is whether Eve, knowing she has to be on the right side of justice, realizes she may be hurting her mirror image. There’s a risk here—a risk that you may go back to being unseen, valued for the wrong reason, or even unloved.

I highly encourage you to watch Killing Eve, not only to support the endeavors of Phoebe Waller-Bridge, Sandra Oh, and Jodie Comer, but also because it’s an exceptional detective story. Women have stories to tell, and it’s our duty to find the ones that really get at our experiences as women and shout about them from the tops of mountains.

There's Something Rotten in the STAR WARS Fandom Previous
Women in Film: Returning the Gaze in REVENGE and M.F.A. Next