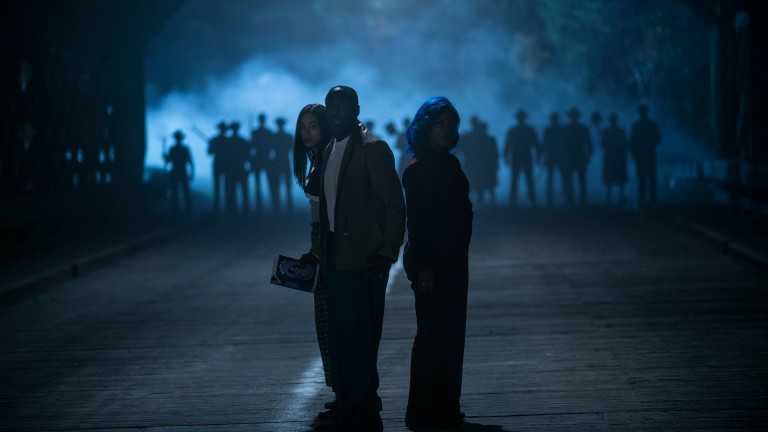 As good as last week’s Lovecraft Country, ”Rewind 1921,” was, “Full Circle” is as much of a letdown. A confused jumble of plots coming to a head, none end in a particularly satisfactory way, and the glaring changes from the source once again sour the whole experience overall. And in an episode in which the central element is the possible demise of Atticus himself, all of the trades recently publishing news about series lead Jonathan Majors getting the role of the MCU’s new big bad after Thanos, Kang the Conquerer, pretty much puts that issue to bed. Two guesses as to how what has now been called a “season finale” (instead of series finale, as if they could concoct more of this mess) plays out.

We open on the crew getting back home and using the spell book to cure Dee. Why they didn’t just do it in the observatory from the last episode where they were all gathered is anyone’s guess (coughsloppyscriptingcough), but they get the Book of Names cracked open and Leti and Tic both take a swan dive into dreamland. Once there, Atticus hears from his long lost ancestor about how she realized the book of magick has power and not just for the Braithwaites, and then weeps to his mother about how he doesn’t want to die. Leti meets with great grandma from the last episode (the one who burned to death), now explaining about what their ancestor’s goal with the book was. Once they come to, they say the spell that finally releases Dee from were-wolfing into a racist stereotype—aside from having a withered mummy arm for whatever reason.

The plot of two episodes ago now wrapped up, Tic and friends then begin looking for a way to beat Christina at the magick game. Their method is never made explicitly clear aside from it being a counter spell, which, big whoop. Part of the spell involves calling up the ghost of Titus Braithwaite and Tic and Leti pull it off with the help from the spirits of the matriarchs they saw in their respective dreams. Titus almost gets away, causing Christina to wreck her car as she recognizes him in the road and she flies through the windshield (unharmed as usual), but Tic and Leti pull him back and Tic cuts a hunk of flesh from his chest as the man who started it all finally dies for good.

Christina shows up later, telling the gang that she’d take the book off their hands in exchange for sparing Atticus at her ritual. Tic says no and she rips the protection spell from Leti as she leaves in anger. Leti eventually appeals to her sister, with Ruby still disgusted by her and on Christina’s side. Eventually Leti wins her over and she attempts to fulfill Leti’s request to aid in Tic’s counter spell: they need a part of Christina as well. Leti finds out that Christina made her William potion from her own hair and nails as well, so she plans on getting a bottle of Jekyll juice for Leti.

Dee, angry at her mother who wasn’t there when she needed her—both when Emmett Till’s funeral occurred and when she got cursed—gets a professionally drawn Orynthia Blue comic slid under her door by way of her mother trying to make amends. When she complains that due to her withered limb she’ll never be able to draw that way, her mother takes her into the other room and shows her something kept from the audience.

The next day the entire family gathers at the woody to take the final drive into Ardham, Ruby slipping Leti a bottle of Christina’s juice before they leave. Ji-Ah is with the group, Tic having explained to her that their love is real and she’s part of their family too (which, considering he’s with Leti, makes us wonder if the writers know this isn’t Big Love-craft Country). Along the way everyone joins in singing along to “Sh-Boom” on the radio which made me think of the hilarious scene of everyone in Clue running around and making it look like Madeline Kahn and Martin Mull are making love to the corpses that keep piling up. Big ups to Lovecraft Country on reminding me of a better ‘50s-set production during its runtime. If the entire series hadn’t been the characters arguing bitterly until the penultimate episode and had given us even one scene of everyone together and joyous it might’ve held weight, but this surprise Brady Bunch moment rings more hollowly than the Gong Show gong.

Yadda-yadda-yadda later, they get to Ardham and Tic begins to enact his plan. The counter spell involves him eating that hunk of Titus and downing Christina’s blood so he begins to muscle them down while Leti and Ruby mark the tower where Montrose was first held with glyphs. Leti notices Ruby acting weird and realizes she’s Christina in disguise and gave Tic false juice. Christina, in a bit of terrible writing, announces that she killed Ruby offscreen and the pair—Leti and Christina wearing Ruby’s skin—begin a massive fistfight that ends with Christina/Ruby tossing Leti off the tower to her death. So there we have it. Leti gone, and Ruby too, offhandedly tossed into the wastebin despite, y’know, getting her own episode and an increasingly centralized presence.

After the citizens of Ardham attack Hippolyta, Montrose, and Ji-Ah (Dee stayed in the car), they get captured and taken to the ruins of the Braithwaite house were Tic already awaits them, strapped down to a table while Christina make snide comments at him. Here the show massively violates its own rules—how Christina, having just been Ruby moments before, a transformation process we know involves gorily ripping their way out of the other skin they’re in, has appeared fresh-faced and dressed in virginal white with perfectly coifed, dry hair, is anyone’s guess and slipped right on through the eyes of the writer’s room like General Patton’s famous “crap through a goose.” Nevertheless, she’s there, and Tic, who drank a vial of juice but isn’t transforming for whatever reason, begins to get hacked away at by her sword.

She bathes in his blood, reciting her Book of Names spell (made to sound like some sort of African dialect) and just as it begins to work, a huge dark tentacle of smoke erupting in the background, Leti wakes up. She feels her body and the mark of protection is back. How or why, aside from literal plot armor, is anyone’s guess and she takes off running to the ruins, trying to interrupt the spell. Ji-Ah, realizing Tic needs to be attached to Christina somehow to make the spell work (though how she’d know of a plan she wasn’t a part of is anyone’s guess) runs into the smoke tentacle and shoots out tail-tentacles of her own which pierce both Tic and Christina. Leti arrives and begins reciting their counter spell which finally strips Christina of her power.

Tic dies anyway, but Christina is done as well, even her ability to cast spells being stripped away. Leti informs her that what they’ve done isn’t just strip her power, but that of all white people, putting it into the hands of the Black people who actually need it. Little Miss Klan-Wannabe won’t get her daddy’s long-sought power after all. This would feel more triumphant if everything I described before it didn’t sound like the mental misfirings of a recent stroke victim, but here we are.

Everyone takes Tic’s body and leaves, the show giving Montrose the capper to his abusive dad/queer person murderer arc, that of Tic telling him to be a better grandpa than he was a father. How sweet for the old throat cutter. Christina, buried under a pile of rubble, moans in the darkness when Dee, now friends with Tic’s weird monster critter, comes up to her. She reveals her withered arm has been replaced by a Terminator-style prosthetic and pops Christina’s throat. Roll credits.

It definitely feels like the people behind the show aren’t looking toward a Watchmen-style one-and-done thing, but an ongoing continuance, even if they closed too many doors and made too much of a mess out of things, unceremoniously killing off half the interesting cast and making a hash of the book it was supposed to be adapting. Given than even SNL is now taking the series to task it doesn’t bode well for a show that went from interesting and historical to an American Horror Story campy meme-fest in less than a season.

Now vs. Then: RISE OF THE UNDEAD Previous
Review: LET HIM GO Next