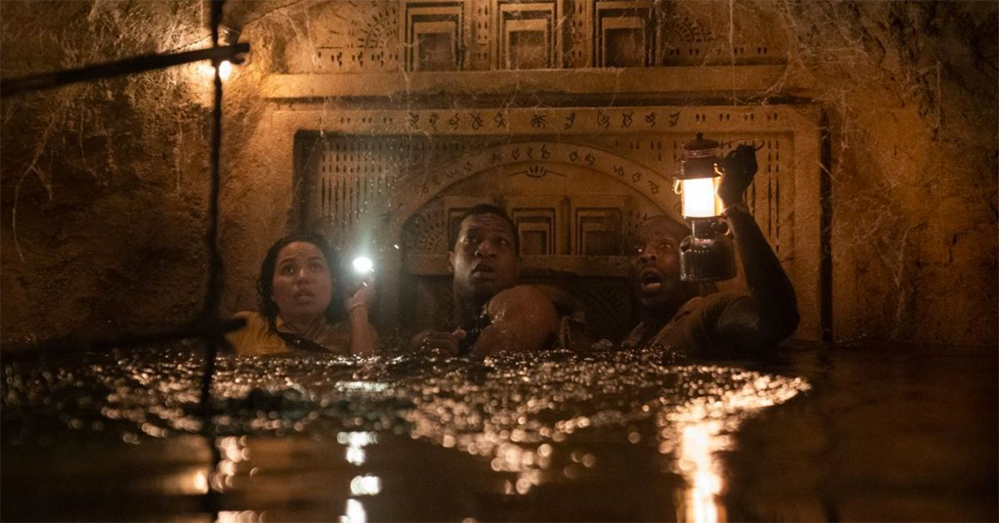 Hoo boy, it’s hard to know what to make of HBO’s Lovecraft Country. As I’ve touched on lightly in previous reviews, there are adaptation choices that baffle me. In any translation, in this case text to television, there are going to be additions, subtractions, and changes made to suit the different formats of the respective product. That’s a given. In Lovecraft Country’s case, however, the choices are often bizarre or arbitrary, or they simply undercut the entire premise of the thing they’re adapting in the first place.

Episode 4’s main plot (and when I mean main, I mean main—I’ll sum up the B and C plots at the end) concerns Christina Braithwaite making an unexpected stop by Letitia’s house—that is to say the Winthrop house—to get Winthrop’s orrery which she seems to think will be the key to finding Winthrop’s pages of Adam’s speech. Trying to barge in, she’s stopped by the mambo’s blessing from the previous episode and Leti takes the roundabout way of telling her to get bent.

Leti seeks out Tic who’s in the local Black library seeking information on Titus Braithwaite to try to find the vault Christina mentioned. He feels if he can get his hands on the pages, he’ll be able to save the family by cooking up some magick of his own. He explains this to Leti who in turn braces Montrose to try to force his hand into helping them. Montrose, who opened the episode by grieving for his brother, George, and reading then burning the bylaws of the Order (despite George wanting him to give them to Atticus), reluctantly agrees to go along. Montrose hates helping and doesn’t like the idea of Tic trying to play a game he feels the white people have rigged against them already. They’re joined by Hippolyta and Dee and an ex-boyfriend of Leti’s named Tree (Deron J. Powell) on account of, according to him, having “one-two-tree” legs, wink. Hippolyta wants to see the Boston museum’s space exhibits (since she’s the one with the Winthrop orrery at present) and the ex wants to save bus fair on a trip he’s taking.

What they serve as in plot terms is minor, unfunny (despite the attempts) road bumps since we know the tension of the episode lies with what Montrose, Leti, and Tic will find in the vault, not whether or not they’ll reach it. Knowing the entrance has to be in the Braithwaite wing—a section of the museum dominated by a statue of Titus Braithwaite and surrounded by cases filled with relics from his trips to Ghana and the Caribbean—they find the entrance after being let in by a friend of Montrose’s after dark. When they quit squabbling they see moonlight reflect off a map and back onto the button to enter the vault and they go down.

The adventure plays at first like a Black version of Indiana Jones, the hugely popular adventure series with its own racial hang-ups (and only one speaking role for a Black actor, George Harris, as the ship captain, Katanga in Raiders of the Lost Ark). So far so good. The section of the Lovecraft Country novel it’s based on, “Abdullah’s Book,” leans more into weird experiences and Lovecraftian geometry, but we can live with this. The gang all make it past the first two booby traps, a plank leading across a huge chasm that slowly disappears behind them while a pendulum blade cuts swaths through the air, very reminiscent of the traps Dr. Jones faces in The Last Crusade. The gang hates that Montrose seems to have more knowledge than he lets on, before he reluctantly reveals he read the bylaws and burnt them to keep everyone safe. Eventually they enter a flooded tunnel that Leti recognizes as the one running under her house and they make it to the end where, after a blood lock is opened by Tic’s special genealogy, they enter into the buried slave ship of Titus Braithwaite. It’s filled with Amblin-style mummies (think of the pool corpses from Poltergeist) of the Arawak people he came across in his last voyage, and we realize this episode hasn’t been a Black version of Indiana Jones but of the Goonies and our eyes roll so far back they fall out of our heads.

The group gets the pages of the book from a mummy that re-plumps into a living intersex character that explains in a tongue that Tic magickally understands that they met Titus when he came to their island to get the pages he had translated but that they stopped helping when they saw him for what he was. The message—lookie lookie at the horrors of colonialism and the reversal of Lovecraft’s ideas of white men getting tainted by natives in favor of the opposite—gets lost in the ‘80s Spielberg-movie vibe of everything. The group, now four strong, flee as the place bursts open with the rising tide and get into Leti’s elevator and take it upstairs. Once home the group plans on teaching the native person English to get help in translating, but Montrose cuts the native’s throat before any of that can happen so the person is just a “Whaaa?” prop. I’d say they were a plot device, but that’d only be true if they really mattered to the story. All they exist to do is be shown off graphically nude and then graphically murdered.

Our B plot this episode features Hippolyta and Dee trying to figure out the orrery. Their interest causes them to visit the museum’s planetarium where Hippolyta reveals that as a girl she discovered the meteor they’re seeing, Hera’s Chariot, but that the science Powers That Be gave the credit to a little white girl instead. In the novel it was that Hippolyta discovered Pluto (aka Yuggoth in Lovecraft lore) but the show once again dances away from the horrors of the racist man it takes its title from. When they’re driving home from the museum by themselves after Leti, Tic, and Montrose all somehow end up back in Chicago, she decides to investigate the atlas Dee is holding and head to Devon County herself, the home of Ardham and the Braithwaites and where her beloved George (not dead in the novel) met his fate.

The C plot involves Ruby heading to Marshall Fields to try out for a job where she meets a single Black woman working there and realizes she took her shot too late. She knows that the store might hire one Black floor worker, but certainly not two. She tries to drink her way out of her misery but ends up getting hit on by William, Christina’s manservant. In the book this was Caleb and what ensued made a lot more sense, but here it’s a sub character since they swapped Caleb for Christina.

And what of that change? In the episode there’s a borderline interstitial scene involving Christina playing hide and seek for the first time with some neighborhood kids while waiting for some cops to pick her up and take her to their chief. He reveals himself to be the head of a rival lodge and angry that a Braithwaite would come to Chi-town unannounced. She rebuffs him and then later William beats up the cops who’d followed her. It’s hard to know what to make of all this. It seems like an attempt to change the novel’s plot of entitled son Caleb in favor of a woman the audience can feel some sympathy for, but none of it works. First off, with the rash of Karens of late and the fact that 53% of white women voted for Trump, it doesn’t help; couple that with the fact that William beating up racist cops comes down to one white supremacist beating up others, and the whole thing seems to undermine the series by undercutting the very examination of racism it’s going for. The show’s seeming avoidance of Lovecraft of late just cements this.

So far the series isn’t bad—it’s pretty good. But pretty good isn’t the same as really good and it’s not close to great. It’s worth a watch, but that’s about it right now. It’s certainly no Watchmen, to name another recent HBO series that centered on assumptions about race in America and that feels both vital and essential. Whether it ends up like the Braithwaite display cases in the museum, nothing more than an idle curiosity to peruse for a bit then move on, remains to be seen.

Isolation Nation: Volume 22 Previous
THE BOYS, Season 2 – Episode 4: "Nothing Like It In... Next