Days of War and Roses 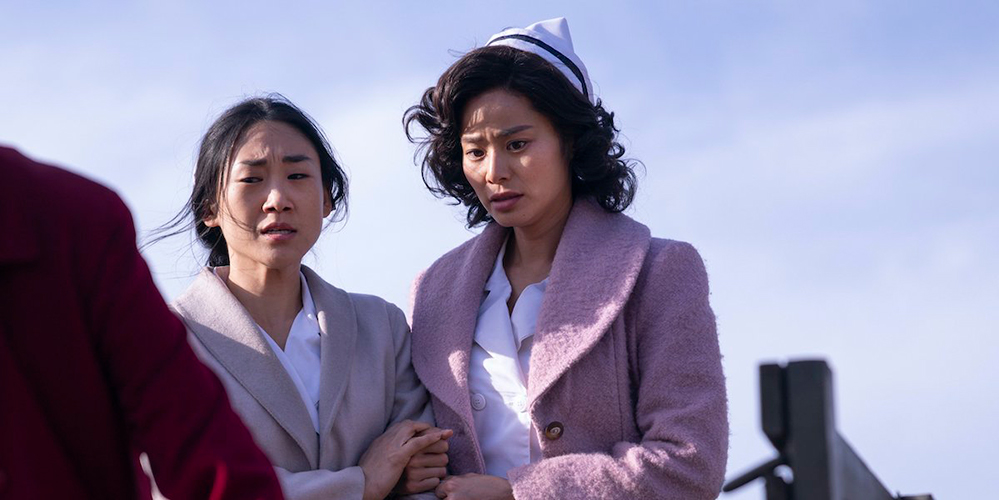 Discussing tonight’s episode of Lovecraft Country is a heck of a thing. The episode, titled “Meet me in Daegu,” opens on a shot of exquisitely gorgeous Jamie Chung (by turns hitting both notes of Geena Davis and Jessica Lange) as Ji-Ah, watching Meet me in St. Louis in the local theater. She’s a Korean woman who’s in love with Judy Garland musicals at the outbreak of the Korean War—even imagining herself dancing and singing in the empty theater to Judy’s “Clang-clang-clang went the trolley…” refrains.

She’s in nurse’s training and is constantly harangued by her mother who uses lots of hifalutin language about how their family has been dishonored and how she needs respect and how it’s all in service to Ji-Ah bringing home a man. If you had an “Asian stereotypes” bingo card you’d be leaving with a Dirt Devil hand vac five minutes in. Ji-Ah, when not learning her trade in nursing school, is going to Mee-Tings, apparently period versions of speed dating, wherein she’s never anyone’s just right to their Goldilocks. The first guy finds her openness off-putting, the second hates her act of shyness, and the third—in presumably a gay joke following last week’s anti-LGBT nightmare—crosses her off after they both gush over how wonderful Judy Garland is.

She eventually snags a man and brings him home. At the moment of orgasm, furred tentacles erupt out of every orifice Ji-Ah has and first penetrate the man anally, literally suspending his body like a puppet as shown in silhouette. (Here, an aside: the series seems to have a real caveman Freud-level fear of sex in general and of the butt in particular per the ongoing theme of these episodes.) As she latches eye tentacles over his face she catches a glimpse of his entire life. The tentacles then fill every other hole he’s got and explode him like a water balloon filled with blood. Her mother comes in, nodding happily, and begins cleaning the room (the show never goes into how you’d get blood off of paper walls, but I’m assuming club soda wouldn’t cut it). Turns out her daughter isn’t her daughter so much as a mythical forest demon, or kumiho (per the episode’s own subtitles) riding shotgun in her daughter’s body. A kumiho, for all of us in the peanut gallery, is a nine-tailed fox, meaning that those fuzzy tentacles, despite being toothed down the entire length and having lamprey mouths, are supposedly tails. Go figure.

Turns out this all started when mommy dearest, a dishonored (there’s that word again) woman with a child out of wedlock, married a pedophile who she knew would provide them a home and income in exchange for raping her daughter repeatedly. She eventually went to a local witch, had her daughter possessed, and turned the girl on her husband as a weapon. Evidently the true Ji-Ah can re-emerge if she sex-murders ninety-nine more men to collect a total of one hundred souls. When we meet her she’s hitting ninety-seven.

Over the course of the episode she hits the ninety-nine mark, but then something shifts. The Korean War begins and she has a fight with her mother who tries to play it both ways with the demon: on the one hand she tells her that she recognizes aspects of her daughter and wants her to complete Mr. One Hundred soon so they can be reunited, on the other she tells her that the demon makes her inhuman and incapable of love (which is probably where all the Judy Garland romcom musicals come into it). Things change when the vicious Americans pull her and her fellow nurses off the truck to the hospital and start summary roadside executions of whomever won’t admit to being a spy until the real Slim Shad—I mean the real spy stands up. Our main man, Tic, is the one who blows the brains of Ji-Ah’s best work friend out and all over Ji-Ah’s face.

And here’s why tonight’s episode is a heck of a thing to discuss. Ji-Ah, a woman who’s been nothing but a vague voice on the phone for the all of maybe fifteen seconds she’s been in the show to date on two calls, one forgettable one in the pilot and another forgettable one a couple of episodes ago, has now gotten her own hour of television for whatever reason, padding out the show with next to no new character information for Tic. Suffice to say the two meet-cute in the hospital where Tic lies wounded, and Ji-Ah’s heart is melted, the demon (or the girl within) finding love and deciding not to sex-murder our hero for killing her best friend.

They begin a tentative relationship in that regard and she relieves Tic of his virginity while he gets the army to find her a copy of Judy Garland’s Summerstock. As these things go, it all falls apart when her tentacle-tails rear their heads during an intense orgasm and she sees Tic’s life—and his death—in the future and far from her. She reins them in, but to no avail. Understandably freaked out by tentacles having latched onto his face, Tic flees. She and her mother visit the witch who, in so many words, tells her she ain’t seen nothing yet.

In a different series—especially one that ran as an anthology—this might have made for a decently creepy one-off episode. As it is it’s nothing but placeholder wheel-spinning that no matter how prettily shot, costumed, scored, or acted (and it’s all of those, believe me, the series is no slouch anywhere but in the writer’s room) serves almost no narrative purpose and serves to add further complications that just confuse and muddle things. The blame has to go at the feet of the showrunner, Misha Green, who seems to have somewhere along the way confused the notions that things being needlessly complicated and things being interesting are the same thing and nothing could be further from the truth.

How it affects a show like Lovecraft Country is in the myriad ways I’ve been enumerating for weeks—turning a male character like Caleb Braithwaite in the book into a woman, Christina, who then Jekyll-and-Hydes herself into a man just to do what the male character did in the novel adds nothing but confusing complication (and in a series with the shameless murder of an intersex character, some pretty iffy subtext). Giving Tic a backstory of encountering a Korean folklore demon while overseas, aside from once again consciously avoiding the horror of the author the show is named for, makes us wonder why Tic gets freaked out at monsters in the first episode of the series. He’s seen monsters before and simply can’t be as shocked running from stuff in the woods as he was after nearly getting sex-murdered by his own possessed lover. For all these additions, they ultimately add up to nothing.

Review: THE EIGHT HUNDRED Previous
Review: AWAY Next