LOVECRAFT COUNTRY Episode 7: “I Am”

I Yam What I Yam 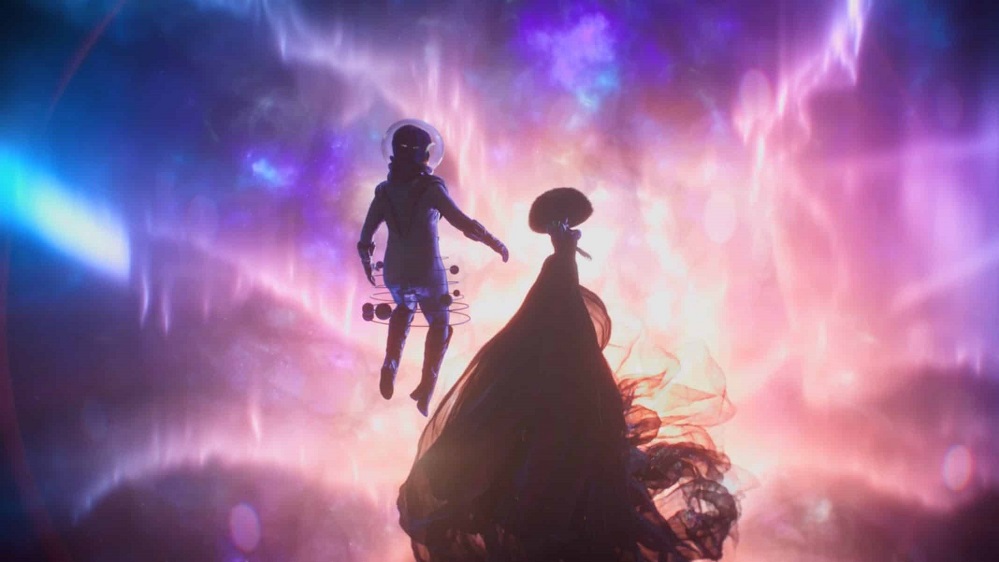 Lovecraft Country’s seventh episode, “I Am,” returns us to our already established characters and the actual story—sort of. It focuses on a story from the novel involving Hippolyta taking a wild ride with the Winthrop Orrery where she ends up meeting an escaped Black woman who got away from the Winthrops by herself punching in random coordinates and getting the hell out of Dodge and into the realms of pulp fiction outer space. It’s a section that, in the context of the book, reads more Ray Bradbury than Lovecraft, and in the context of the series watches more Original Star Trek than anything else.

The episode opens with Leti having a dream much like Tic’s in the second, about their ancestor fleeing the old burning Braithwaite lodge with a magickal book in hand. Leti gets the added notion that she might be pregnant via Tic (confirmed a few more times in the episode) but only tells Tic about the first part. Together they think they’re being told to look for the Book of Names to get the original magick they need to save themselves. They eventually seek out Montrose who’s now living with his lover, Sammy (Jon Hudson Odom), who, when not in drag, can’t escape Montrose’s ire. When Tic and Leti show up and catch the two fighting in the hall you can almost hear the sitcom audience “Uh-oh!” as the secret gets revealed. Tic asks Montrose if his mother knew before fleeing and telling Leti about how he now realizes what his father beating him to not be soft really meant.

It’s another addition to the Montrose rebirth story, which is still pretty much unredeemable since the guy cut an intersex character’s throat for no reason. It’s the type of thing you can see the writers desperately trying to redeem him for, all the while not realizing that a marginalized minority—that is a Black, gay man—killing an even more marginalized minority—a Native Caribbean intersex character—is a bridge too far whether in real life or fiction.

Meanwhile, Ruby’s been discovering what’s in Christina’s cellar, which is the bodies of William and Dell. Christina’s been bleeding the corpses to provide their Jekyll-Hyde cocktails. Ruby tells her she can’t trust her about anything, but Christina—after a sob story about how women aren’t allowed into her daddy’s racist warlock brotherhood—tells her she meant everything she said as William. This adds another off-putting LGBT element to the series since it’s a woman, as a man, having sex with a woman, essentially living the life of a part-time trans character (which isn’t a part-time form of existence). And while Christina’s been whispering sweet nothings to her, up until Ruby found out directly that the man she was sleeping with wasn’t one, it’s all been trickery and rape, elements the episode never touches on.

Hippolyta, herself a one-woman Hidden Figures movie, cracks the Winthrop Orrery which spits out a key and then decides to follow its coordinates to an observatory. Once at the observatory she starts trying to figure out the math needed to visit one of the planets she’s seen in the strange orrery, her face overlaid with mathematical symbols as she cranks out sheet after sheet of calculations. The shows plays this confused math lady meme for utter seriousness until guards come in demanding how she got the observatory cooking again.

Tic, who’s been on his own mission trying to track down his mom’s relatives and find the Book of Names, gets a call from Leti. In a bout of what we’re led to think is pregnancy sickness, she goes upstairs and discovers the overturned orrery and tells Tic where Hippolyta’s gone. He shows up to help just as the police open fire, hit the machine parts, and open a trans-dimensional gate that keeps flashing between realities. Tic tosses one guard in and Hippolyta shoots the other before herself being sucked in. She ends up meeting a cyborg African woman who tells Hippolyta her name is “I am” presumably referencing God within Christian eschatology. She asks Hippolyta, who’s been freaking out and trying to figure out a way home by using math, who she is. Hippolyta first tells her she’s always wanted to be a dancer with Josephine Baker.

She dissolves into particles and reforms onstage in Paris with Josephine Baker as one of her background Charleston dancers who spends more time goggling at Baker than doing the steps. She eventually learns the moves and lives her best Midnight in Paris life meeting people like Frida Kahlo along the way. During a conversation with Josephine she says, “I am Hippolyta” and breaks down into particles again. For me it was the most enjoyable part of the episode, but then I’ve always been an old soul (or an old sole, shoe or fish, take your pick).

When she reforms it’s as a Zulu-meets-Amazon warrior woman (presumably an Afro-centric take on the Greek myth) learning to fight to protect her all-woman village. She eventually gets the hang of swordplay and leads the battle against a horde of men all made up as Confederate greys. They battle viciously, being routed by the women, in a sequence that straddles a line between something cool in a blaxploitation way and something as corny as the Star Trek episode, “Let That Be Your Last Battlefield,” where the half white/half black aliens hated the half black/half white ones. Once Hippolyta makes a rousing speech about how men try to control women and put them in their place via their emotions, she says “I am Hippolyta, wife of George” she dissolves and reforms with her husband.

Telling him about her experiences and how they confirm a multi-verse, she tells George that she’s always had to shrink to fit into the world and not allowed herself to grow to be what she knew she could be. And that he didn’t allow it either, even though he saw her struggling. He admits she’s right and together they go onto their next adventure, dissolving and re-emerging as Orynthia Blue and her male companion, a comic character her daughter Dee came up with who is a blue-haired pulp sci-fi Black heroine going around and cataloguing the universe.

When she meets her great benefactor one last time, she’s informed she can stay and join in the great exploration, but she asks if she can go back since she knows her daughter, Dee, needs her. She also questions how she can shrink all of the lives she’s lived back into herself already knowing the answer. Tic tries to bring her back to the observatory even as the machine finally breaks down and the portals close. He grabs up as much evidence as he can not even seeing the Orynthia Blue comic lying in a  puddle of blood under the dead cop. We’re left wondering what’s become of Hippolyta herself.

“I Am” is a good, but not great episode of the series. It would have meant more if we knew more about Hippolyta; that is, if George’s wife hadn’t just been a sullen woman working on cracking an orrery like a Rubik’s cube and had actually gotten an external life beyond existing as a plot-point driving toward her own episode, there’d be so much more depth beyond what’s presented. Unfortunately any character that’s not strictly Tic or Leti seems to exist for the time we see them then go back into their own respective cupboards until their keys are wound up and the little tin toys get let out to do something again.

It’s a shame because the lesson of the episode, about how we can let the outside expectations of the world box us in and make us small—and perhaps this is the most important—end up becoming our own wardens as much as society, is a great one. In a series with weak characterizations and such major negative LGBT issues and sexual hang ups, however, it’s buried under so much more.