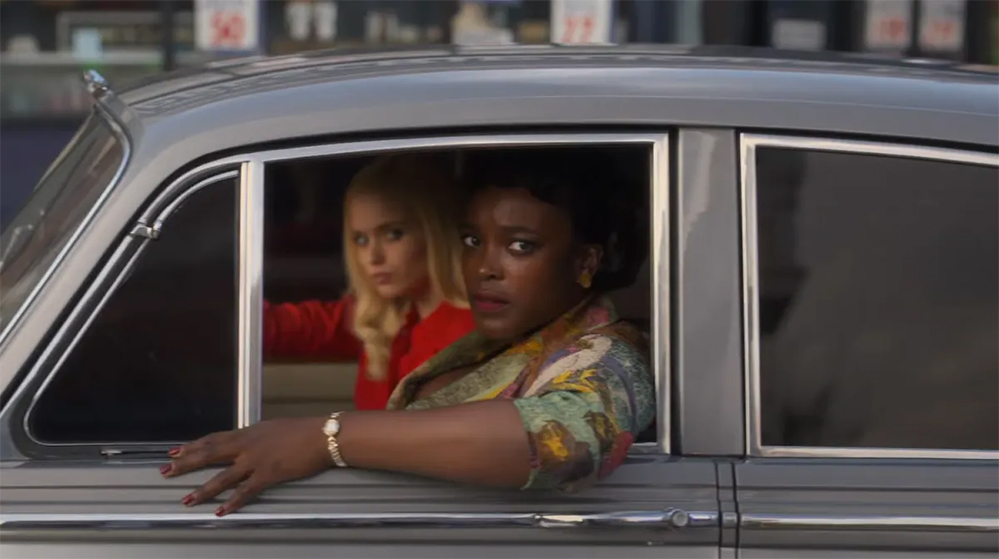 I sat down to watch the ninth episode of Lovecraft Country and I was just not feeling it. Weeks of watching a great book adulterated to no good purpose, of seeing poorly developed characters, terrible plotting, horrendous anti-LGBT story choices, all of it has made me cynical about the series HBO was hoping would chase their other pulp series, Watchmen, doing for horror what it did for scifi and comics. And then… and then an episode like “Rewind 1921” comes along and it’s a truly wonderful episode of television. In a better series, it would be an all-timer; in the hash of Lovecraft Country, it’s a stand out, a promise of what the show could have been if they’d just created an original property altogether or at least treated the series as Watchmen treated itself, as a sequel to the source material.

The episode opens with the entire family—Montrose, Tic, Leti, and Ruby—gathered around the bed of Dee, still feeling the effects of her encounters with the monstrous pickaninny children in the last episode, whose attacks left her becoming one herself. Knowing they don’t have much time and after revealing to each other all the ways they’ve been dabbling in the world of the Braithwaites and their magick, they all decide their only help is to get Christina to aid them in removing the police captain’s curse. Ruby gets Christina who tells them they’ll need the blood of Dee’s closest relative to make it work—everyone assumes this is Dee’s father George’s brother, Montrose, but Montrose reveals that George might be Tic’s dad, instead. Tic, who’s dealt with a lifetime of Montrose’s monstrous behavior, is understandably Over It.

When they’re all coming together, Hippolyta suddenly re-emerges as if from the Clichéd Timing Closet, and Christina uses her blood instead; the spell, as she’s informed the room, is only a reversal spell, not a cure—since she didn’t cast it herself, all she can do is help them stave off time until it takes hold again. Which isn’t to say that, as William, she hadn’t already gone and visited the captain who, after getting devoured in the end of the prior episode, was hoping a new body transplant would keep him alive but didn’t count on Christina’s anti-magick. He thought he’d regenerate whole and new, but she made it that he’d regenerate just as he was—which leads to his grisly, but not unpleasant demise.

After Dee reverts, Hippolyta comes up with a plan that involves them returning to the Orrery: she’s going to open a portal to 1921 Tulsa where the family can grab the book they lost in the attack on Black Wall Street (yes, once again inviting Watchmen comparisons) all those years ago. By this point I was ready to roll my eyes and settle in for another mess, this being the one where the characters all regroup before next week’s finale. Yawn, spit, snore.

But then the show does something extraordinary: It gets to 1921 Tulsa. As our group steps through the portal into the Stratford hotel, I smiled knowingly to myself at Michael Kenneth Williams being in another 1920s set show on HBO while Al Jolson’s Avalon played on the soundtrack. But as soon as they gather period clothing and head out into the streets it turns into something wonderful like “The City on the Edge of Forever,” a classic episode of the original Star Trek series, similarly about a crew of intrepid heroes time-travelling back to Prohibition-era America. As Tic, Montrose and Leti bicker their way across town, they’re also caught up in the wonderment of what they’re seeing: Black people, dressed to the nines, living wonderful lives, blocks of stores for them and by them, and all selling the same goods any white establishment in any big city would have on hand. Knowing that they’re only hours from seeing all this destroyed and can’t do anything to change it just adds a ticking clock element of incredible tragedy hanging over the sun-drenched streets of Greenwood.

As they approach Montrose’s childhood home, they come upon a scene of Montrose being beaten by his father for putting on his brother’s prom jacket and prancing about. Montrose mutters how he deserved it, but Leti corrects him: “Ain’t nobody deserve that.” It’s heartbreaking because it’s a display from reality—even amidst a group of people we know will soon become victims of White Supremacy, old judgements and hatreds exist and die hard, and someone like Montrose has spent so long internalizing them he can’t see anything but being deserving of such scorn. He flees and Tic takes off after him, leaving Leti to try her best to get the Book of Names from the family home.

As Tic catches up to Montrose near the park, he can see where his father got off to. He followed his younger self and watches the boy meet up with his childhood friend and crush, Thomas, whom his younger self says he can’t see anymore. Our Montrose tearfully tells Tic he wishes he could save Thomas, noting that in a few minutes, when the Tulsa massacre begins, Thomas will be shot in the head and he’ll chalk it up as just another sacrifice he made in becoming Tic’s father—because, as he states, a father is a man, and men have sons, and all he ever wanted was to be good to Tic in spite of himself. When the Klan arrive and begin their spree, the boys clasp hands and try fleeing, Montrose narrating that their holding hands now was out of fear and that they’d never been able to bring themselves to do it before. As a person who came out late myself, it reminded me of my first date with my now partner of two years. As the evening wore on and we were getting on ever so sugar-fine, I asked if I could hold his hand and he responded by being taken aback, telling me nobody he’d dated had ever asked him to do that before clasping my hand as we walked. My heart broke all over again watching Montrose narrate such a moment as it did for my partner then. We feel for Montrose not in spite of his horrific actions taken later—that Montrose is forever ruined as a character—but for this Montrose, the scared gay boy of 1921 Tulsa on the eve of the massacre, and our tears flow freely if we have an ounce of humanity in us.

The Klan does shoot Thomas through the head, splattering his brains all over Montrose. As George and the girl who’d become his first wife show up, they get the gun away from that group of Klansmen, but face the onslaught of their hickory axe handles. Leti, meanwhile, has fled toward Montrose’s childhood home as a group of Klansmen come roaring down the street in a truck and start firing at her. Montrose’s father and their next door neighbor take up arms and begin firing back and soon a conflagration of violence erupts. As the family takes pistols and stake out positions, Leti searches for the book until she’s confronted by Tic’s great grandmother who asks her who she is and what she’s doing—mostly based on Leti still wearing her tennis shoes in spite of her flapper dress. Leti explains to the woman who she is, how she got there, all about the woman’s birthmark, how Leti herself is carrying Tic’s child, all of it. The woman, who’s been in possession of the Book of Names since it was passed down all the way from Titus Braithwaite’s original servant, knows she’s not lying and asks her if this means she herself will die. Leti nods tearfully and the two women begin reciting the Lord’s prayer as the house burns and the narration of Sonia Sanchez’s “Catch the Fire” begins.

Tic and Montrose watch as his younger self and his brother get surrounded, wondering when the stranger who helped in Montrose’s youthful memories will show up and start knocking heads (similar to Jackie Robinson knocking them outta the park) when Tic steps forward and bumps into a baseball bat. This is the closest the episode gets to playing Back to the Future (unlike episode 4’s terrible Goonies-inspired story) and it’s all the better for it. Tic swings away, smashing jaws, splitting skulls, splintering ribs, the mysterious stranger arrived at last. He then flees back through the hotel and the portal while Montrose waits for Leti to catch up to them.

While Hippolyta has trouble keeping the portal open, Tic talks her up into using her full powers—as she floats in the air her hair turns the blue of Orynthia Blue and she keeps it steady. Montrose watches an untouchable Leti carry the book along a street that’s now an open war zone—the KKKristallnacht has become a full on occupying army attacking peaceful American citizens and it’s heartbreaking to see (let alone watch nightly in our news as police continue to riot against BLM supporters). Leti steps around the fallen Dreamland theater marquee—a key location from the pilot of Watchmen—and continues as a biplane drops bombs on the street. The flames leave her unscathed, but as truckloads of howling Klansmen drive around her we’re reminded of how far she’s come and how little distance she’s made since fleeing the pale, howling woods monsters and racists of the pilot.

The destruction is so large it beggars belief despite it all having really happened, and it’s completely emotionally devastating to see, knowing it was all for the sake of people with money enjoying themselves a little bit and not hanging their heads low because of it. When the screen fades to black you feel as if you’ve been concussed by one of those Klan bombs yourself. I was weeping, starting with Montrose in the park and not abating until well past the credits. That Black people can even stand to look any of us in the eye and speak to us is a testament to the amount of love they have in their hearts after the awful and endless (to this very day) list of atrocities that have been perpetrated upon them over and over again. And it’s this type of realization that good art—and “Rewind 1921” is great art—can get us to.

An episode like “Rewind 1921” is so good it makes a person wonder at all the baffling decisions made in prior episodes. Like the Ji-Ah starrer, “Meet Me in Daegu,” it’s the show inventing material whole cloth, running with it, and telling an excellent story. It’s bizarre how the same show could do such a botch job on the murder of Emmett Till just last week and this week pull off something so astonishingly great. Maybe if, as I stated at the beginning, Lovecraft Country had been an original premise instead of an adaptation—or had, like Watchmen, treated the source as sacrosanct and itself as a sequel—we could have avoided all the adaptation pitfalls and pratfalls they’ve made and had something truly excellent start to finish. As it is, it’s a very rough series, but an episode like this, that can almost be surgically removed from the experience as a whole, is so good it still deserves a place at the table.

LOVECRAFT COUNTRY Episode 8: "Jig-A-Bobo" Previous
THE PEANUTS MOVIE: The Power of the Underdog Next