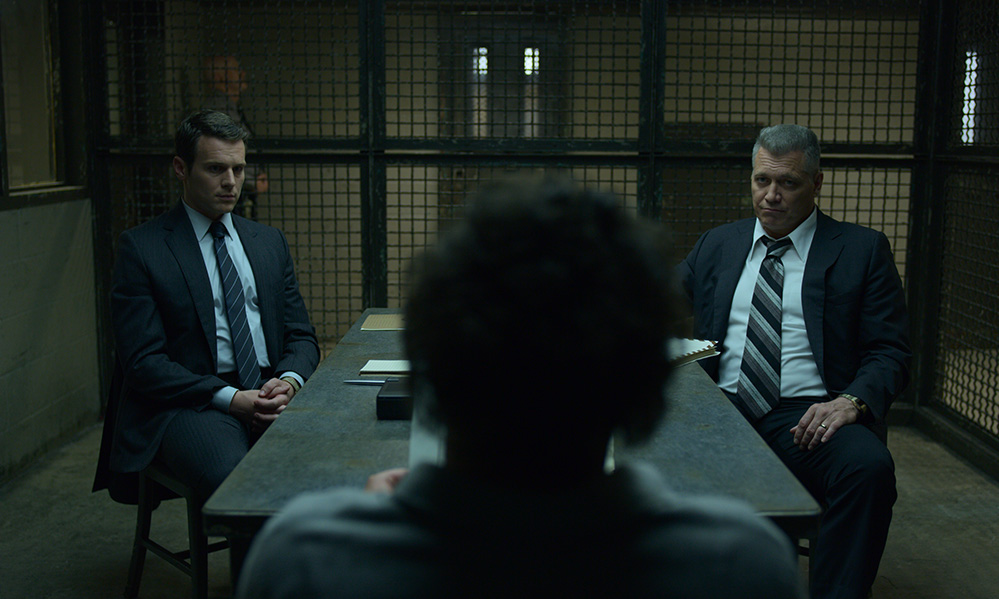 Mindhunter’s Episode 2 throws Bill and Ford into the BTK case. Bill and the local detective on the case visit the Otero family home, where four members of the family (parents and two children) were murdered. Tench surmises with horror that two of the the Otero children must have witnessed their parents’ murder before being victims themselves. The police were so desperate for leads they brought in a psychic.

Bill and Ford, in an effort to find out more about the mentality of their mysterious killer, conclude they have to talk to David Berkowitz, who also sent letters to the police and gave himself a moniker (the Son of Sam). Before they can walk out the door, Wendy asks how this will fit into their analysis, which has so far focused on killers who were not like Berkowitz at all. In fact, there’s no real reason – in her mind – why Berkowitz should be given higher priority than the list of killers they want to talk to. It echoes her opposition in the first episode when Ford says that Ted Gunn will get them an interview with Manson. To her, they’re chasing something shiny.

Here’s where the iron hand of the law braces against the need for scientific rigor. Wendy’s from a world of academia where experiments, interviews, and research can be carried out systematically. Bill and Ford are law enforcement agents, looking to prevent crime. Nothing about what they do can be as tightly controlled as Wendy desires. To his credit, Bill at least tries to justify shifting Berkowitz on their schedule of interviews but stops short of saying that she has to follow their lead on this one because her work – their work – relies entirely on the good graces and funding of the FBI.

Wendy and Bill, already on tense terms, also meet to talk about Ford. The former reveals that she knows Ford went to Vacaville to see Ed Kemper and Bill is truly surprised that she knows and tells her that he was the one to escort Ford back to Quantico. As usual, the two adults in the room are left covering for Ford almost immediately after they were almost fired over his transgressions.

The scenes with Berkowitz are unnerving because unlike other killers, Berkowitz seems… affable? Berkowitz gives us the first funny serial killer interview? When Bill hands him a photo of BTK’s “logo” Berkowitz said, “what is this, boobs?”

It’s remarkable how much Oliver Cooper looks like Berkowitz with the help of some prosthetics and makeup and the curly hair just so.

Check out @MINDHUNTER_ tonight at midnight on @netflix. I play the infamous serial killer David Berkowitz (son of Sam). Beyond blessed to be a part of an incredible show. pic.twitter.com/uMpeu53zgM

Berkowitz admits that claiming he heard demon voices was utter bullshit, giving an ugly little smirk and leaning forward on his arms, knowing he has an audience. He speaks like a high schooler trying to explain to the principal what he did. He seems genuinely interested in talking to Bill and Ford about BTK.

Do they get anything useful though? It’s not clear. There are so many limitations to what the team knows, not just about serial killings, but the killers themselves. More than other episodes, this one shows its hand when it comes to using real world facts to steer us. For example, when Bill talks to the brother of Kathryn Bright, he says confidently, “this guy does not go to church.” We guffaw, knowing he’s wrong.

Ford says every killer they had interviewed suffered from poor childhoods and neglect, and had struggled to be contributing adult members of society. So this Kansas City killer presenting to his victims as clean, upright, and normal completely upends Ford and Bill’s neat little definitions of behavior. Bill says he is “as ordinary and suburban as the victim pool.”

They’re working backwards, talking to people who have already killed to potentially glean insight into a man who is currently killing. When Berkowitz suggests that BTK would be going out every night to look for victims, we know he’s wrong. Bill surmises that someone like that would have no family or relationships, nor would he be able to have a white collar job. It all contradicts everything they’ve been able to learn so far.

These limitations come to the forefront in a horrific way at the end of the episode, when Bill and Nancy get a visit from Detective Art Spencer, who says that the police are investigating a homicide at one of the homes Nancy is selling. Spencer doesn’t want to alarm Bill or Nancy and he can’t discuss details, but the man is clearly troubled.

What else happened this episode?

I find it interesting that Mindhunter is adding more BTK this season. It’s certainly kind of controversial in my mind, because there’s no indication in real life that Dennis Rader’s wife at the time, Paula Dietz, knew about his “deviance” and she certainly didn’t know about his crimes. She has never spoken publicly about Rader, the trial, or the crimes. It’s also important to remember that though we know this character is BTK and the woman he’s with is his wife, neither of them have been given names and so that makes her less of a character. In this narrative, it’s all about the killer and not about the woman with him.

Kerri Rawson, who is Rader’s daughter, recently published a memoir about her experience growing up with Rader, and said her mother could not have known about his horrific crimes.

If you want to know more about the comparisons between the real BTK and the fictional one, who better than Rawson herself:

This was when I was writing, and had to get an extension on top of one.

Per Mindhunter character, he’s very close, but dad didn’t wear glasses till the mid-late 90’s, and he wore his pens in his left ADT pocket.

Besides noting those particular issues, Rawson didn’t watch the season as it was too close to her home life.

For me, it raises questions about the show’s tricky balance of maintaining some degree of realism while clearly staying safe in the realm of fiction. They strive to cast actors who truly resemble the killers they portray (like Cameron Britton) and add some minor prosthetics work to get actors to look closer to their real-life counterparts (like Oliver Cooper as David Berkowitz). Then they add drama to the BTK subplot by having his wife hand him a book titled, “Therapeutic Approaches to Sexual Deviances.” When a show like Mindhunter delves into the home lives of people like Dietz and add suppositions for drama, it can get dicey. Dietz can’t correct the narrative put on screen. There aren’t any concrete answers for whether fictional portrayals that include family members of serial killers should be given any more thought than other portrayals, but it certainly is something to think about.

UNBELIEVABLE: A Story That's All Too Real Previous
Review: JOKER Next