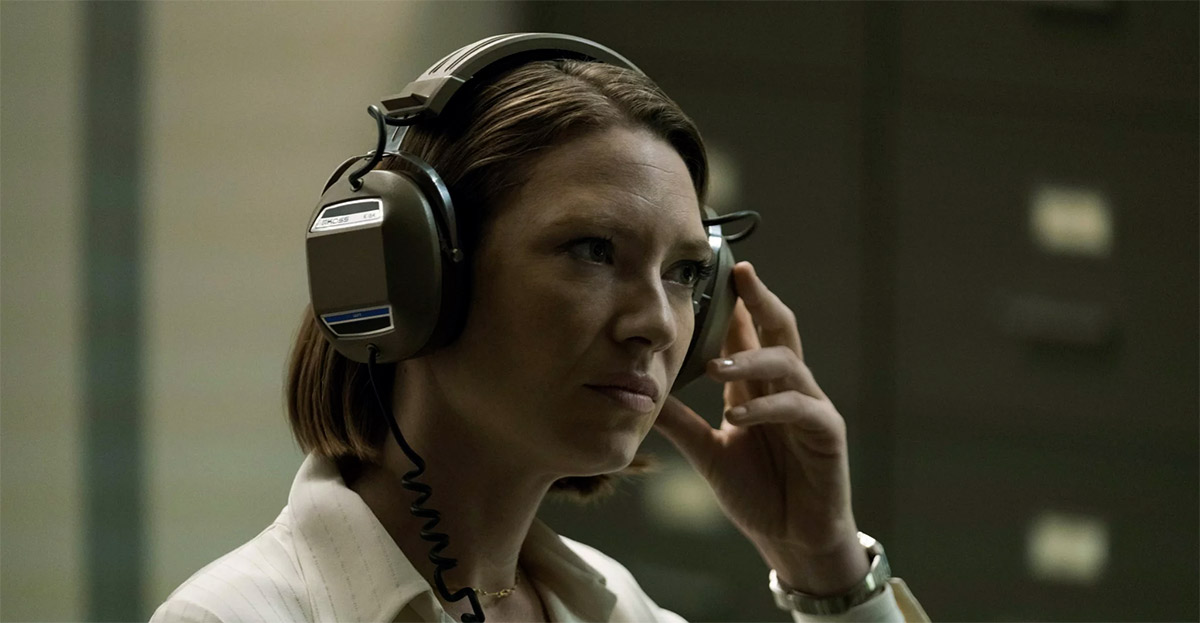 Episode 3 is very slight, though this isn’t a bad thing! This episode was more of a palate cleanser. Not a whole lot happens, though certain scenes tie up loose ends and help set up future episodes. First, we get some more insight into Holden’s abilities as an agent. In episode 3 of Mindhunter, Holden and Bill visit Ed Kemper at the California Medical Facility again and continue getting him to open up. Holden is different when he’s around Kemper. He orders him pizza and promises to get him a typewriter. In episode 2, this seemed to be accidental, the ploy of an inexperienced agent going through stories about his girlfriend to try to get a subject to open up – now, it’s clear that is no longer the case. Holden’s wide-eyed, earnest nature is genuine and well-suited to his handsome face, but it’s also a tool that invites other people to trust him. Holden seems to instinctively calibrate how he behaves around certain people (open with Bill, curious with Kemper) and to cause them to think he’s their friend. Bill even says that Kemper thinks he (Kemper) and Holden are friends. It’s a powerful skill for an FBI agent to have. It’s also a powerful skill for a serial killer to have, so let’s be happy that Holden Ford is one of the good guys, okay?

Second, we are introduced to another major player in the world of criminology and psychology. In an effort to get feedback on their work, Bill brings them to talk with Dr. Wendy Carr, a psychologist. Played by Anna Torv with a steely drive and competence (not unlike Olivia Dunham, her character in Fringe), Dr. Carr tells Bill and Holden that their work could be groundbreaking, but that so far, it’s too informal to be truly valuable. The agents, as diligent as they are, need to defeat the FBI’s skepticism to get more funding. They wisely invite Dr. Carr to Quantico to work with them, and I look forward to seeing these three together again. Their dynamic is off-kilter in the best way. Whenever Dr. Carr is in the room, she’s immediately the draw. Bill and Holden are skilled investigators, but their focus is too narrow. All this time, they’ve been seeing their work as useful for catching killers. Dr. Carr makes them see that this has a whole other world of application beyond Quantico, not just to researchers but to regular people who want to understand human nature.

Just like Holden Ford and Bill Tench, Dr. Carr is based on a real person. In this case, she is based on Dr. Ann Wolbert Burgess, real-life badass. Dr. Burgess not only pioneered research on treating sexual abuse, and she has worked for decades to help sexual abuse victims. She also co-founded one of the first crisis counseling programs to be in a hospital, and was called a Living Legend.

We also see that Holden and Bill are developing as partners. We’ve only seen them on screen for about three television hours but they’ve been on the road for months, which now presents as an easy rapport among co-workers, occasionally punctuated by Bill’s one-sided phone conversations with his wife (we don’t hear her). Bill’s phone calls do more to show the inner workings of a relationship than actual scenes with Holden and Debbie do for theirs. Bill and Holden’s personality differences are clearer in this episode, too. When Bill receives a call from Detective Carver (from episode 2), informing them there’s been another attack in Sacramento, Bill is forlorn and contemplative. Holden is hilariously and inappropriately excited that there’s been a murder because it means he gets to investigate.

Their investigatory powers are at full effect when they return to Sacramento to help Detective Carver find out who attacked two women. When Bill and Holden start talking to Dwight, a suspect who lives with his domineering mother, we’re in for a treat. They volley back questions and insights like Venus and Serena Williams, feeling out Dwight’s vulnerabilities. This scene is really fun, and shows how these two investigators have developed together.

This show is intriguing, cerebral, and far more interested in the mind than the crime. In the age of Criminal Minds, where each cold open depicts a grisly murder, this is a welcome change. There is one glaring issue here, which is that this show is very white male. There are no people of color on this show, not even in supporting roles and not even in the police stations Bill and Holden go to when they teach. This is ridiculous, and I hope it’s remedied in upcoming episodes.

My other criticisms about last episode continue here. Debbie is in one scene, and she’s not even wearing pants. What the hell? The writers were so focused on the mindhunting part of Mindhunter that other things fell by the wayside. It’s lopsided, to the point where Debbie is perfunctory and serves no purpose except to take up a scene. Hannah Gross, who plays Debbie, makes do with what she has, which isn’t enough.

Thankfully, the other woman in this episode gets a lot more to do (she got to wear pants and have a PhD). I wouldn’t mind a show that was all about Dr. Ann Wolbert Burgess. She seems like a fascinating and incredible woman. I started reading one of her books while I was writing this review and let’s just say I’m ready to rack up some student loan debt and go into psychology.

On my wishlist for episode 4 is for Debbie to get a real personality or even offer more insights like she did in episode 1. I also want more Dr. Carr and more local investigations. I want my three favorite characters to interview murderers, talk about the unknowable depths of the human mind, and to become the legends we know they will be in real life.