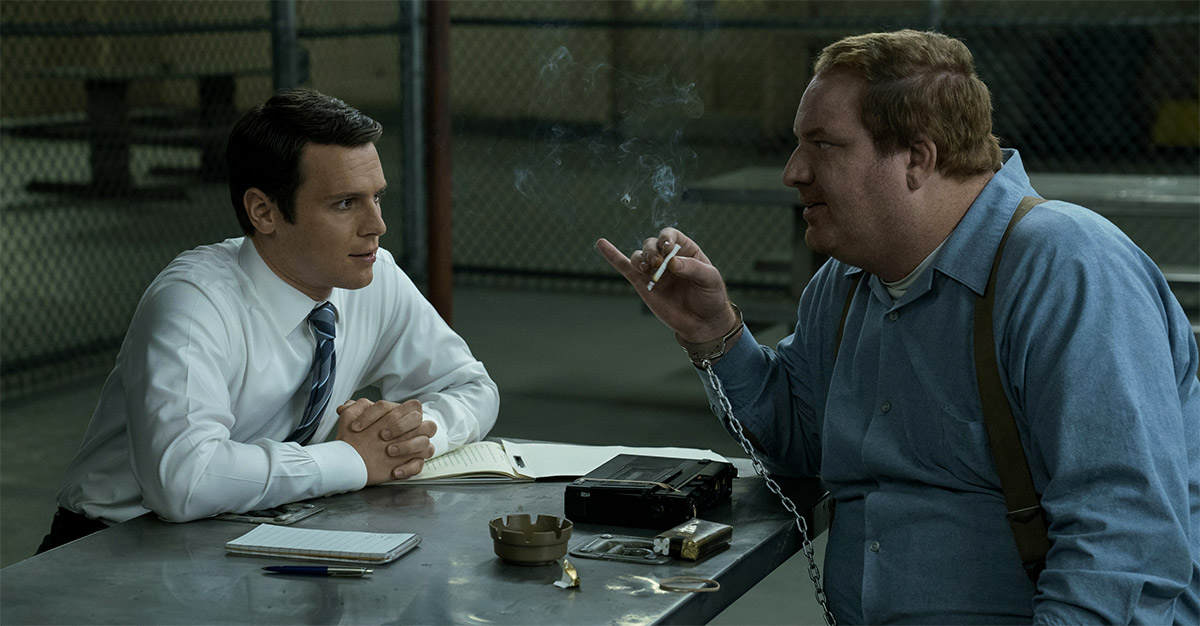 We’re now approaching the last three episodes of season one, and our next serial killer interview is with Jerry Brudos, who sexually assaulted and strangled at least five women in Oregon, leaving the bodies weighed down in a river. When police caught him, he was already married and had two children; his wife was accused of being his accomplice, but there was no evidence to suggest she knew about his murders. She eventually moved away and changed her name. Brudos is set apart from the other killers on the show due to his fascination with women’s clothes and shoes. He had, since he was a child, pilfered clothing and shoes from women around him.

Happy Anderson, who plays Brudos, gives him a hulking menace that is lacking from the other killers so far. Kemper was a large man but soft-spoken to Holden and Bill. Monte Rissell was aggressive, but not as physically imposing. Jerry Brudos is both aggressive and large, forcing the audience to pay attention to him. Anderson’s voice is like a low rumble and his entire presence is like an oncoming storm. I’m glad they saved him for the last three episodes.

The theme of episode seven is whether we can keep our personal lives separate from our work lives. In episode six, we found out that Dr. Carr is a lesbian, and that she had a partner in Boston. When she moves to Quantico full time, she’s still a mystery to Bill and Holden and it seems she would prefer to keep it this way.

Bill is having some real troubles, though. His eyes have been opened, and he’s seeing the dangers lurking around him. He can’t help but bring his work home with him, psychologically and physically. This causes problems when Brian, his son, finds crime scene photos in his home office. It scares the babysitter so much she quits. Bill can’t keep his personal life from seeping into his professional one, either. Bill tells Brudos his wife’s name, and you can tell it sickens him. Holt McCallany plays Bill with such heartache and compassion that it’s hard to watch. He’s a man falling apart before our eyes.

Holden is delighted with his work and happy to share personal stories. Is he detached because he’s a psychopath or because he subconsciously recognizes that he’s acting anyway? Throughout the series, Jonathan Groff has played Holden with an otherworldly, aloof quality. Now, it appears that maybe he’s more at home with the killers rather than in the office with Bill or shoe shopping with Debbie. The twist in Groff’s facial features as he looks at shoes, trying to connect them with Brudos’ fantasies, is disturbing and fascinating.

The episode doesn’t tread lightly on the issue of Brudos cross-dressing and enjoying women’s clothing. It uses Dr. Carr to call out Holden and Bill on their bullshit masculinity, their preconceived notions of what men are and how they should behave and their ridicule of men who don’t conform. This echoes a conversation Bill and Holden have in episode six, about how everyone had absent fathers. For Bill, who feels he has to maintain a life separated from his work, remarking on absent fathers now comes off as a halfhearted attempt to justify his own decision to not be present for his son, with whom he cannot connect. It’s an effective and interesting way to connect themes across episodes, and creates a consistency in these characters that I appreciate. Many shows build characters one layer at a time, but Mindhunter calls back on previous layers as if to say, “this was here all along, you just didn’t see it until now.”

Overall, this episode is more uneven than the others. We explore Bill’s personal life a lot more, and while it connects appropriately to the main theme of the episode, Holden’s personal life is firmly usurped by bouncing ideas off Debbie to solve the mystery that is Jerry Brudos, and so his life with Debbie falls flat (even more so than usual). Dr. Carr has a fun moment where we see her doing laundry, and she leaves a can of tuna out for a stray cat. She doesn’t see the cat, but she knows it’s there. Is the cat a symbol of serial killers, always there and never seen? I think Mindhunter is smart enough to not be so obvious.

For episode eight, I would like for Bill and Holden to finally talk about the fact that Holden seems to lack feelings. I mean, shouldn’t it be obvious by now that Holden, whether he knows it or not, is doing a poor job of actually having emotions? I don’t think he’s a psychopath or a serial killer in training, but I do think that having feelings has to be instilled in us. What happened in Holden’s life that repressed his ability to successfully convey emotion?

Things We're Digging This Week - Week of 11/6/17 Previous
It's A Long Road: A Veteran's Day War Film Retrospective Next