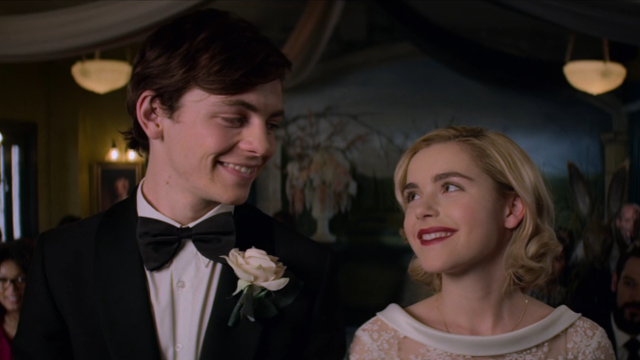 So far, the Chilling Adventures of Sabrina has given us thrills and chills, and a compelling protagonist and wonderfully sassy aunties. What it hadn’t given us yet is a genuinely good standalone episode, which is something that tends to go away when it comes to the binge model of television. If you have every episode at your disposal, why not craft a 9-hour movie? What is the role of the standalone episode nowadays when we only need a palate cleanser when we turn off the television?

Well, standalone episodes are important, not just to give you a breather from the main plot but to reveal deep truths in their own way. In episode 5 of Sabrina, “Dreams in a Witch House,” Sabrina has just unleashed a demon that was trapped inside the Acheron. Oh did you not think she’d solve it? Of course she solved it, at the end of the last episode, in fact. Now there’s a demon bound to the house thanks to the Spellmans’ quick spell work, but still loose in the house, unbeknownst to our witching family. This demon is Batibat, a dream demon. She (I presume Batibat is a she) wants out of the house and so one by one, each member of the family gets dropped into their worst dreams over and over, until they give up the spell to let Batibat out.

Sabrina’s nightmare reveals her biggest fear, that Harvey won’t accept her as a witch and that he hates that she lied to him. He and his family lock her in a medieval torture device and bleed her dry. It’s an effective first nightmare, and something that reminded me yet again of Buffy’s heyday Ed note: RESTLESS in particular. Hilda and Zelda have dreams involving each other, because as sisters their biggest nightmare involves losing the other or their own insecurities. For Zelda it’s particularly interesting because her biggest nightmare – that the Dark Lord has come to visit but only wants to talk to Hilda – isn’t even the worst of it. She’s inconsolable that she’s lost her sister forever, who she killed in another bout of her rage. Her selfishness and desire for momentary satisfaction becomes her own undoing and her insecurity leads to disastrous results. Sabrina uses Zelda’s dream to show us that her steely exterior is hiding a person on the edge of despair. Perhaps Hilda’s excommunication bothers her more than she lets on.

Surprising to me was Hilda’s dream. Hilda is afraid she’ll be stuck with Zelda forever, and will be faced with her sister’s cruelty and insults for the rest of her life. She dreams of a connection with another person, notably Sabrina’s former principal at Baxter High. Imagine that, middle-aged women wanting to be desired and it not treated as a punchline. It’s a nice bit of character building that doesn’t require too much from the audience. It’s a glimpse, perhaps to be deepened later.

Ambrose’s dream is more on the nose. He clearly wants out of the house, and as he’s granted his freedom it’s taken from him violently. His nightmare is being a body on the slab of the mortuary, having died as he lived – inside the same house.

I really liked this episode. I thought Batibat was done well, the nightmares were crafted nicely, and the visual flair this show has displayed continues to impress. I especially like the special effects that went into Sabrina using Hilda’s familiars (her spiders) to trap Batibat, a combination of computer graphics and a game of good, old-fashioned cat’s cradle.

I think it’s really interesting that Sabrina continues to connect Harvey back to our protagonist. Like I said in my review for the last episode, Harvey is the only mortal who has any real connection to the central plot. At this point, I’d like to see him fully integrated into the story because these little scenes where he shows up occasionally just aren’t doing it. The heart wants what it wants, and Sabrina wants Harvey and I want to see more Harvey. Otherwise, I think the show is wasting Ross Lynch’s talent.