Sabrina's third hour spins its wheels but isn't without charm 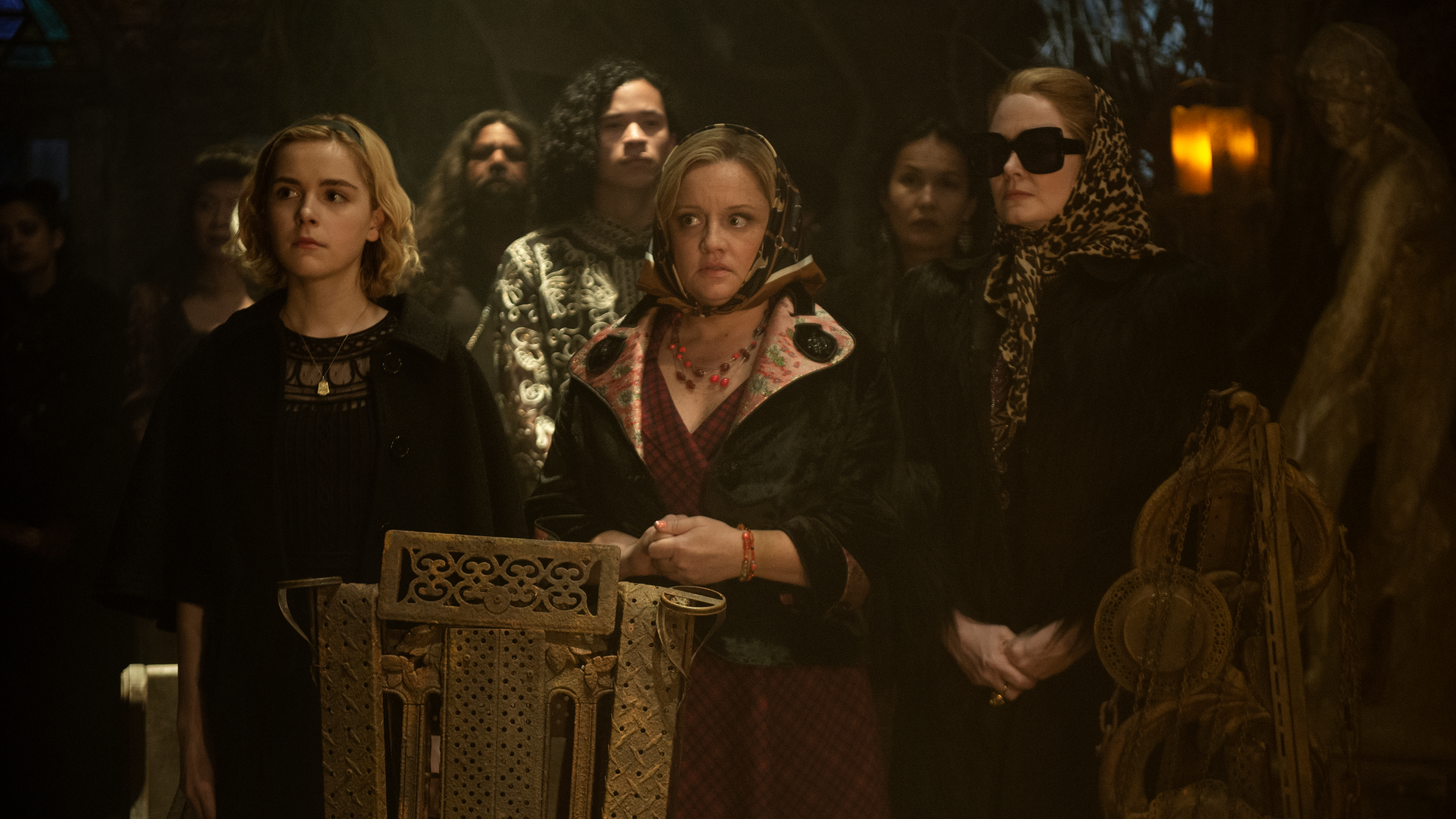 The third episode of Sabrina, “The Trial of Sabrina Spellman,” has our heroine fresh off rejecting the Dark Lord, and Father Blackwood’s torch-bearing mob still is lingering in her mind. Then, a message arrives: Sabrina is being sued by the Dark Lord for breach of promise because she refused to sign her name during the dark baptism.

What. A. Premise. Unfortunately, this episode ends up spinning its wheels, trying to do too much while meandering along just enough to get the job done and conclude with Sabrina enrolled in the Academy of Unseen Arts.

The Dark Lord’s lawsuit alleges that Sabrina promised to sign her name over to the Dark Lord and then refused, and Hilda and Zelda are blamed for this calamity because they are her guardians. In witch world, you’re “guilty until proven innocent” which seems awfully tone deaf for a people who have literally faced trial themselves under the same kind of foolish mentality.

To fight the Dark Lord’s malicious suit, Sabrina enlists Daniel Webster1, a mortal man who is also a legend in witch law. Webster bursts into the courtroom just in time to defend his client, eliciting scandalous gasps from the coven.

Unfortunately, Law and Order: Special Witches Unit is not the only plot of this episode. In Sabrina’s mortal land, Roz is trying to read The Bluest Eye by Toni Morrison but there is an unwritten ban on “controversial” books. Sabrina is being sued by Satan and has to go to witch court. WITCH COURT. How can Roz’s reading list ever be anywhere as interesting? When we find out that Roz is so eager to read The Bluest Eye because she’s suffering from a medical condition that will render her blind, it’s pretty hollow as far as dramatic stakes go. I mean, I sympathize…but Sabrina’s about to get sentenced to burning in a pit for 333 days after her mortal death. I mean, they really aren’t the same, you know? I kind of understand now why Zelda doesn’t concern herself with mortal issues.

In my review for the first two episodes, I said that I hoped Roz and Susie got more to do. In “The Trial of Sabrina Spellman” they actually do more, but it’s pretty much all for naught. I don’t like visiting Baxter High anymore, sorry. Sabrina herself is barely there to anchor those scenes in anything real. Not even for Michelle Gomez’s vamping as Ms. Wardwell, who at least gets to hang out (and threaten) Father Blackwood. The Baxter High scenes can’t ever compete against the supernatural plot, and suffer immensely from being separated from it.

Harvey isn’t even integrated into the Baxter High plot much anymore. Harvey’s father wants him to get his head out of his drawings and down into the mines, making money with the family. Harvey is upset about this development, not only because mining is a terrible and unhealthy profession but also because he has a deep, dark secret, which he reveals to Sabrina during their frequent walks in the woods. Eight years ago, he was playing hide and seek and hid in the mines, where he saw a hellish goat-like beast (guess who?) engulfed in fire. It scared him so much he cried for hours, and still didn’t stop even when Tommy found him. He’s terrified of going back into the mines.

At this point, we have basically two different television shows. We have one in which Sabrina has her chilling adventures (and Harvey, thinking about his encounter with the Dark Lord), and we have Roz and Susie doing typical teen stuff like trying to read books. You see how one inherently seems way more interesting than the other? It doesn’t do Sabrina any justice because it’s simply not clear why Sabrina is fighting so hard to maintain her mortal life. Her mortal life is full of boring problems.

Back in court, Father Blackwood unloads a doozy piece of evidence: Sabrina’s name is in the Book of the Beast! How? It turns out that days after Sabrina was born, Zelda and Sabrina’s father conducted a ceremony and had her name included, thus binding her to the Path of Night even before she could say her own name – and they did it in exchange for permission for Edward to marry Diana, Sabrina’s mother! Hilda has a doozy revelation of her own! Before Zelda and Edward went to the Greendale woods to devote baby Sabrina’s soul to the Devil, Hilda and Diana went to the Catholic church down the street to have her baptized!

Honestly, bus riders… this is a bit much and it didn’t work that well for me. Dueling family secrets should be more interesting than just being about paperwork. Aside from the fact that there are now competing claims to Sabrina’s soul, Sabrina’s mother signed her name “Spellman” – she wasn’t married at the time, obviously, so is it still a binding contract? Or maybe she was married in mortal land? I know it comes off as being nitpicky, but these are details that, when not considered, contribute to a shaggy episode.

Another thing that didn’t quite work for me is Daniel Webster’s secret, that he signed his name to the Devil to become an incredible lawyer but his cases were always to defend murderers and rapists, one of whom murdered his daughter. His arguments with Father Blackwood also don’t make any sense. He tells Blackwood that Sabrina is subject to human laws (are witches not human?) as well and demands a mortal jury….for what? What would you even say? This defense is half-baked! It only serves for Blackwood to hit back with the claim that for Sabrina to be subject to human law, she’ll have to consent to stripping down and being examined (in public) for a witch’s mark.

Look, I am aware that subtlety goes out the window for this show when it comes to emphasizing how–in this world or others–men have all the power and women are constantly scrambling to get some of their own and to keep it. Here, it’s excessive. Does Sabrina having Harvey look at her back for a witch’s mark (while dear Harvey is extremely confused and also fairly pleased to be half naked in the woods with his girlfriend) do anything to further the plot? Not really. Does it help add to the world building? Not really. Does it act as an excuse to get Ross Lynch to take his shirt off? Not even! This scene is so weird. It’s ostensibly about two people who love and trust each other being able to let down their guard. But it doesn’t fit in at all, and the only thing grounding it is Kiernan Shipka conveying sadness that she can’t really tell Harvey what’s going on in her life.

Lest I come off as a grump, there are lots of things I do like about this episode. For example, when Sabrina calls out both parents for deceiving each other and committing her soul to dichotomous deities, Zelda flips up her veil in exasperation and says, “honor thy father and mother!” It’s quite a line. Zelda acknowledges the Ten Commandments, which I suppose is either a callback to Sabrina technically being Catholic or is an acknowledgment that there’s room in the Church of Night for the tenets of the Bible. I really like that, so far, this show does treat religion seriously, though it remains a very silly show (in a great way).

The set design and costuming continue to be impeccable. The courtroom set crackles with energy and color. A standout is what appears to be a colorful chalk drawing of the Dark Lord in evil beast form and the strategic placement of lanterns, chandeliers, and candles. No one looks bad in candlelight.

In these scenes, Sabrina is in a black wool coat that reminds me of Veronica’s cape on Riverdale. Hilda and Zelda are in luxe fabrics and high shoulders, signs of power where they don’t have any. The judges are in these tall cone hats that wouldn’t look out of place in Dune. Also commendable is the aging makeup put on Hilda and Zelda in this episode. It starts off subtly, with a broken tooth here and an extra wrinkle there. Then there’s a shock of silver hair and, to go for broke, actual bodily fragility. By the time Hilda presents her evidence, she’s downright elderly and Zelda has veiled her face in shame.

I want to focus on the character interactions, too. Father Blackwood is a misogynist and skeeve, a walking lady hater in a frilly frock. The way he struts around the court, clearly in his domain, makes his smugness even more unbearable. It all serves to give him monologues, which are a delight for the ears. His volleys against Webster and then against Sabrina show that each character is a force in their own right. Webster, in particular, may be mortal but he’s got authority and power when it comes to witch law (too bad about his weak arguments). Then there’s Zelda and Hilda, who we discover actually sleep in the same bedroom. This reinforces their codependency, something shattered when Zelda reveals to Hilda that she’s been excommunicated from the Church of Night. It doesn’t just mean Hilda is cast out and without a tether to the witching world, it means that Zelda is without her main partner in life.

It’s this friction between her aunts that underlines Sabrina’s feelings of betrayal, too. Sabrina has previously commented on consent and committing yourself to something. Sabrina trusts Zelda and Hilda to do what is best for her and protect her, and she’s devoted to being a witch, just on her own terms. What’s more dangerous than the threat of burning is the idea that her own family members keep secrets from her and act on her behalf without her input. It breaches her trust and denies her any ability to give consent and it makes it harder for her to lay down terms when she can’t even see the playing field.

One of the reasons why this episode feels off-kilter is that it takes an inherently outrageous premise and essentially only uses it as an excuse to move the plot along and get Sabrina to the Academy of Unseen Arts. It’s a filler episode when it’s not supposed to be. I’ve seen the next episode, and I know the action kicks up and the show returns to being fantastic. It’s just that we shouldn’t have wasted one whole episode pushing us to the real story. It could have been done better.